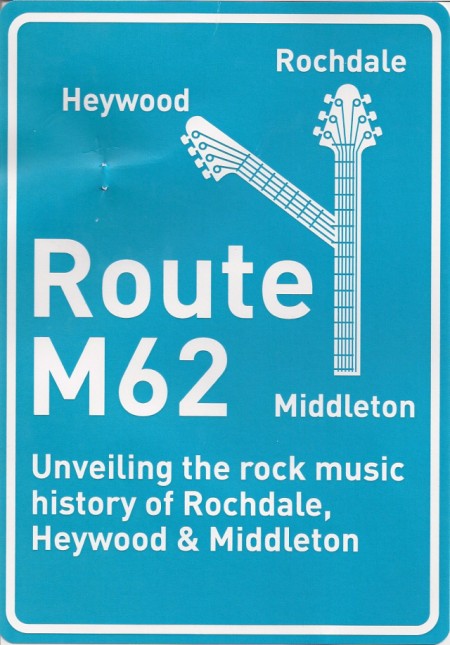 On Wednesday 23 September 2009 two blue plaques will be unveiled in the Borough of Rochdale to commemorate and recognise two uniquely important recording venues/music buildings that influenced rock and pop music locally, nationally and internationally.

From 1974-1990 some of the most influential and celebrated recording artists of the era recorded or bought equipment at Kenion St in Rochdale (Tractor Music/Cargo Studios, then later Suite 16) and Tractor Sound Studios in Heywood. These include Joy Division, New Order, Inspiral Carpets, The Stone Roses, Happy Mondays, The Chameleons, The Charlatans, The Fall, The Mock Turtles, The Teardrop Explodes and Orchestral Manoeuvres in the Dark.

Less famous, but no less influential local bands such as John Peel's 70s favourites Tractor also recorded in the studios, and all were intrinsically linked to the local and regional live music scene and to a world-wide audience. Technicians, engineers, managers, roadies, journalists and fans of note also passed through the doors of Tractor Music, Tractor Sound Studios, Cargo Studios and Suite 16 Studios. Equipment for the Hacienda sound system and Peter Hook's Joy Division and New Order bass set-ups were designed and built in that little building in Rochdale. He still uses the equipment today.

The event on the 23rd will consist of the two unveilings: the first in Heywood at Tractor Sound Studios, Dawson St / Market St (a studio financed by John Peel), followed by a music exhibition at Heywood Library featuring the pop music history of Heywood, Middleton and Rochdale, then on to Cargo / Suite16 / Tractor Music in Rochdale. Guests will travel between the two towns and studios, finally heading to the Backdoor Music Project for a reception and live performance from bands - including young musicians from the town. A number of high profile guests from the music industry, many of whom are linked directly to the studios' past, have already confirmed their attendance. The guests will also include journalists that will be in Rochdale to cover the story. Plans are being made to improve the immediate environment (planter boxes and general tidy up of the area) around the studios and a large outdoor mobile video screen will be playing footage of the studios and the bands that recorded within.

Most of the unique musical heritage of the borough may come as a surprise to local people and indeed to the local authorities. Tractor Music, Cargo / Suite 16 and the Deeply Vale Festivals attracted attention from far and wide and hugely influenced the now world famous Manchester music scene. Factory Records was intrinsically linked to the Cargo/Suite16 studio and both studios were supported and aired by John Peel on Radio 1. The studio was used for location shots during the filming of the movie 24 Hour Party People.

The obvious links between what is happening in the borough today and this rich vein of heritage are already being drawn together. The Back Door Music Project has submitted a bid to Heritage Lottery Fund for £25,000 for their young people to undertake a year long research project into the musical heritage of the borough. The Blue Plaque project has been the inspiration and start for the young people and it is this initial investment that will make the application extremely favourable and attractive to the HLF.

This will produce an exhibition at Heywood Library and Touchstones; music workshops for young people; activities and training for those taking part; an oral history project recording memories and stories of the time and some high profile public events in the town centre. The project will also produce a musical heritage trail around the borough that will encourage people to visit and share in the borough's unique cultural heritage. In terms of project beneficiaries the HLF project (working title "Rockin' Roots") will engage up to 25 young people in directly running the project, some 50 or so members of the community involved as interviewees, volunteers and workers and ultimately around 250 different young people in activities, workshops and performances. The final number of beneficiaries is hard to estimate as it will be the sum total of website users, visitors to tourist information, Rochdale residents and musical tourists who explore, experience and learn about the fantastic musical heritage Rochdale Borough has to offer.

The exhibition at Heywood Library, commencing 23 September 2009 at 12 noon which is currently being researched by Chris Hewitt, will cover the history of Heywood, Middleton and Rochdale pop music - including the history of The Seven Stars as a 60s and 70s live music venue; Alan Duffy and the now defunct Hopwood based label Imaginary Records (that even received an application letter from an unknown Kurt Cobain of Nirvana), Tractor Sound Studios Heywood, Deeply Vale, Machine Gun Feedback /The Space Monkeys, and the history of Wigwam - the church youth club / music venue that developed into local music employer and international sound specialists company Wigwam Acoustics. The exhibition will also cover lots of other Heywood and Rochdale pop music connections. Lots of Joy Division and Martin Hannett related items will also feature in the exhibition. 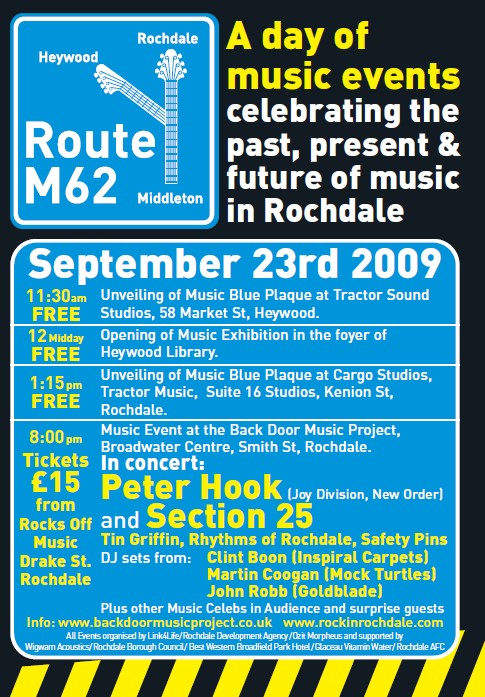