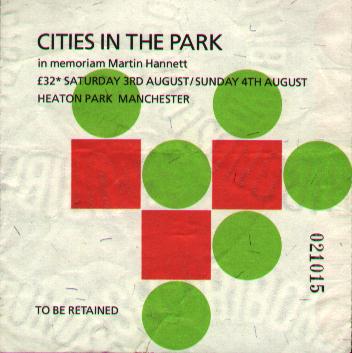 Ticket for Cities In The Park 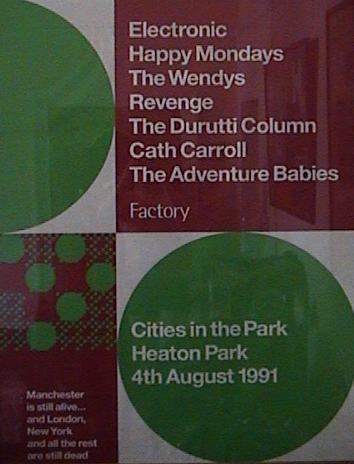 Original poster for the Factory day at Cities in the Park

Cities In The Park was a two-day open air show held in Heaton Park Manchester on Saturday / Sunday 3/4 August 1991. The event ran from noon to 10pm and tickets were 32 GBP for both days or 20 GBP for one day. Camping was available for those with weekend tickets. 10 per cent of the ticket price formed a donation to African Famine Relief and the Kurdish Trust Fund

The second day was 'Factory' day, headlined by Electronic featuring guest appearance by Pet Shop Boys. The Factory line-up also featured The Durutti Column, Revenge, Adventure Babies, Cath Carroll, A Certain Ratio plus De La Soul and New Fast Automatic Daffodils; the event was billed as 'In Memoriam Martin Hannett' who had recently passed away before the event.

Extract from Q Magazine's review of the event: It could almost have been called The World Versus Factory Records. Day One featured alternative rock from all over the country, while Day Two was almost exclusively Factory acts. Day One never stood a chance with a local crowd bedecked from head to toe with self-congratulating Manchester T-shirts. Best reception of the day was, not surprisingly, for The Fall and Buzzcocks and, surprisingly, the ever-unhip OMD. Day Two was hotter, louder and more replete with atmosphere. From Cath Carroll to Happy Mondays, Tony Wilson's roster were all present. Wilson himself introduced things in his favoured Hunter Thompson meets Robert Maxwell manner. With the appearance of supergroup Electronic, including Pet Shop Boys - it seemed that Manchester has taken over the world for the day. And that day, it had. Highlight: the bizarre and somehow charming stage invasion by small children during Happy Mondays' encore, perhaps signalling a new era of Benetton-style love and peace in the world.

Review of the Cities In The Park video (from Q magazine): Palace, 80 mins Cities In The Park, Manchester's tribute to and benefit for Martin Hannett which, ironically, left certain parties seriously out of pocket, looks unlikely to recoup any losses with this video of the weekend event. The backstage banter is rife with superficial in-jokiness, and worse, the music rarely rises above competent, although Electronic and New Fast Automatic Daffodils do manage to muster up a snaky groove. Buzzcocks are punk-pop to Revenge's hoary grunge-rock; A Certain Ratio and Cabaret Voltaire's doleful funk both maintain their roots in early-'80s, post-punk dance; Natural Life and Ashley & Jackson make indifferent blue-eyed soul. The Happy Mondays top the bill but they're sounding increasingly lacklustre out of the studio these days - Shaun Ryder can hardly work up the necessary enthusiasm to emote. Only Ruthless Rap Assassins sound sharp, and their set was curtailed by the generator packing up. [2 stars] Martin Aston 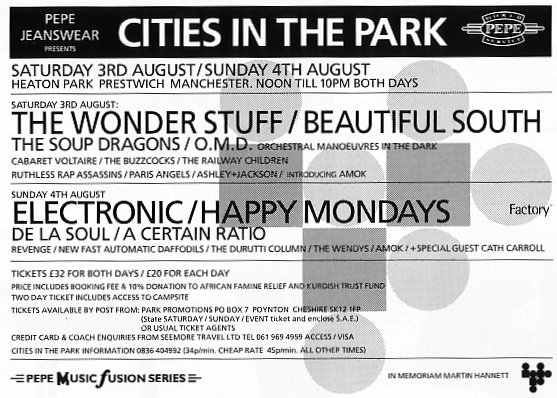 Press advertisement for Cities In The Park 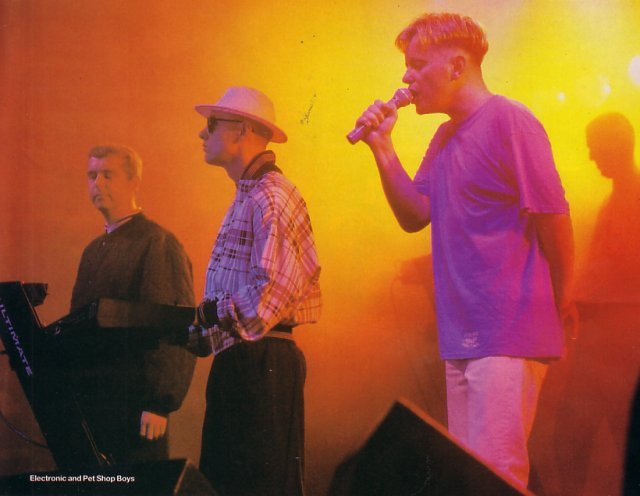