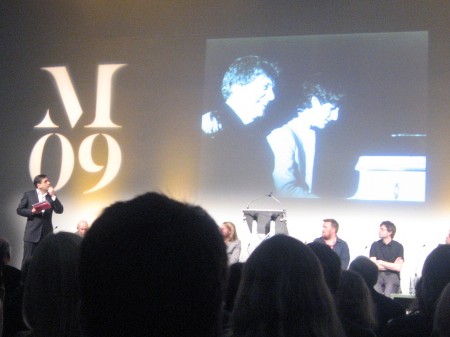 A Paean To Wilson

The Festival commissioned a new piece by The Durutti Column and it will be premiered at 3 special shows taking place in Pavilion Theatre tent in Albert Square in the city centre of Manchester on 15-17 July 2009.

The band will be playing a brand new instrumental piece is entitled 'A Paean to Wilson' as a special tribute to Tony Wilson who died in August 2007.

"I want the work to be purely instrumental, my 'awful schoolboy poetry' style of lyrics discarded, to realise Tony's greatest wish for my work; to finally be as he really would have liked it to be; music in its purest form." Vini Reilly.

The Durutti Column, comprised of Vini Reilly, Bruce Mitchell, Keir Stewart and Poppy Morgan will be joined by special guests including John Metcalfe.

Elbow and The Hallé

Orchestrated and conducted by Joe Duddell on Wed 8 & Thu 9 July at the Bridgewater Hall. They will be playing songs from across the band's career and beyond, curated in collaboration with Mancunian composer Joe Duddell. Duddell has a Factory Records link in that he studied composition with Factory Classical artist Steve Martland.

Created for the intimate surroundings of the Festival's Pavilion Theatre, True Faith is a celebration of established and emerging cultural talent, all of it made right here in Manchester.

An Audience with... offers an opportunity to get up close and personal with Elbow's Guy Garvey, actor/comedian John Thomson, and writers Jackie Kay and Lemn Sissay, all of whom will be talking about their personal and professional lives with series curator Dave Haslam.

Semi-Plugged, meanwhile, showcases some of the best new bands in Manchester, performing their own material and one-off covers alongside a number of special guests.