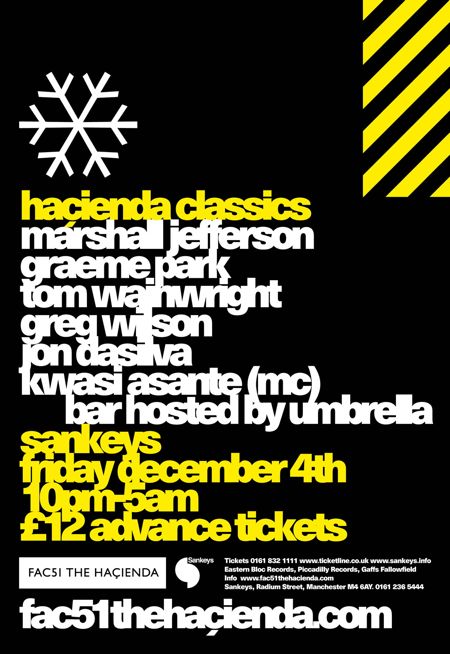 A fine bill has been put together for the occasion with legendary Chicago House producer, Marshall Jefferson headlining the Christmas party. Producer of the Sterling Void and Ce Ce Rogers classics, the first two Ten City albums, and his 1986 ground breaking Move Your Body for seminal labels Trax Records and DJ International, Marshall is one of the most knowledgeable and sublime DJ's from the last 25 years and his appearance at Sankeys marks the first time he has DJ'd for the revived Hacienda.

The event also sees The Hacienda's Saturday night DJing team of Graeme Park and Tom Wainwright reunited for the Hacienda faithful. Having helmed The Haç's Saturday nights from its reopening in 1991 right through to 1996, shortly before the club's closure, Graeme and Tom are rightly revered as two of the finest purveyors of US garage and house, and it was their sublime, silky skills and knowledge of the genre that came to define the Saturday sound of The Haç.

Rounding off the extensive line up is the esteemed DJ legend, Greg Wilson who became a resident at The Hacienda early on in 1983, having previously cut his teeth at The Wigan Pier. Greg became known for shaping the early sound of The Haç with his individualistic take on early US electro. Greg has recently returned to prominence with his Credit To The Edit series and has become known as one of the early DJ tastemakers.

Joining Greg upstairs at Sankeys is Hacienda Hot resident and mainstay Jon Dasilva whose mixing skills and sense of set programming led him to inspire the likes of Sasha and many others early on whilst local Manchester MC, Kwasi Asante will also be overseeing the event with his unique style of vocal encouragement for the crowd.

More info via the FAC 51 The Hacienda Facebook group.