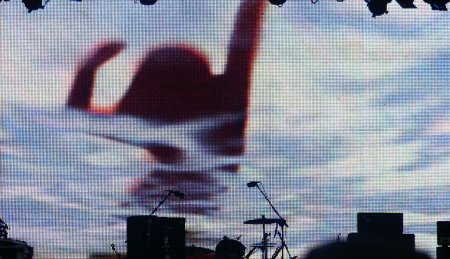 Get Loaded In The Park 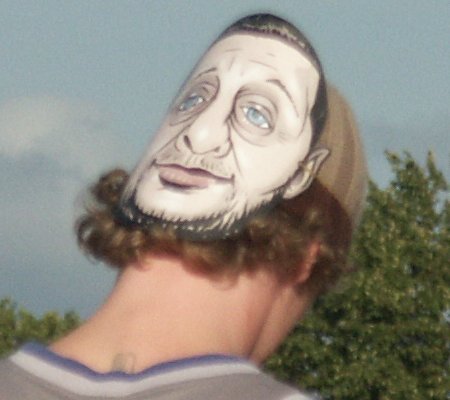 Get Loaded In The Park; the man in the Shaun Ryder mask 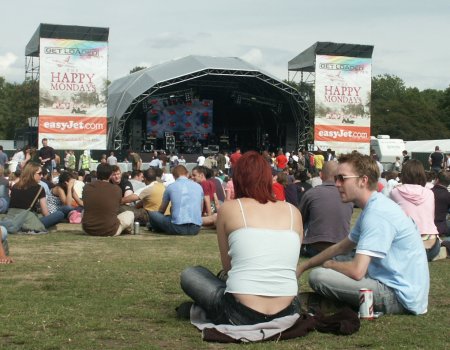 Get Loaded In The Park; the Main Stage 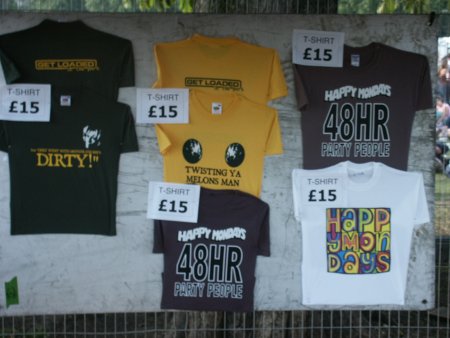 Get Loaded In The Park; Get Loaded / Happy Mondays T-shirt selection 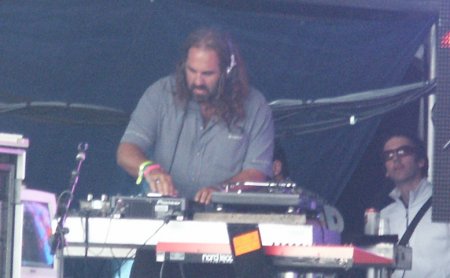 Get Loaded In The Park; Arthur Baker 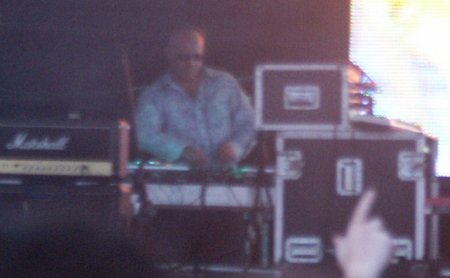 Get Loaded In The Park; Graeme Park 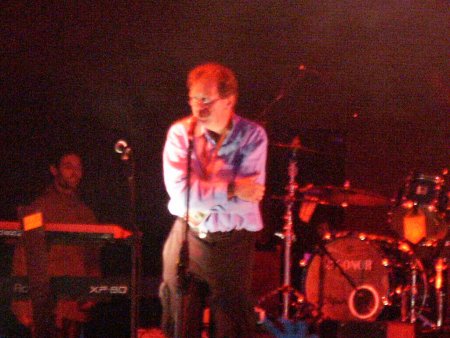 Get Loaded In The Park; Tony Wilson 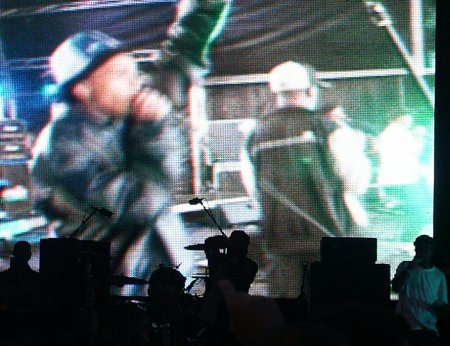 Get Loaded In The Park; RAW-T 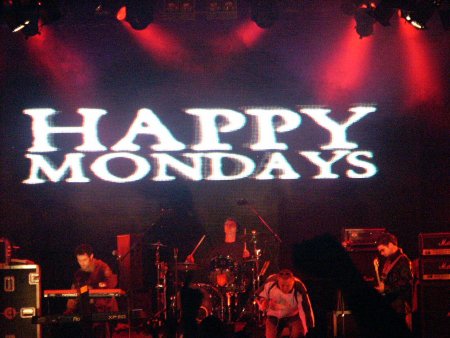 Get Loaded In The Park; Happy Mondays 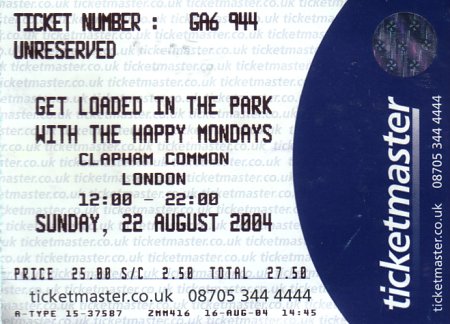 Get Loaded In The Park; ticket

Early Get Loaded In The Park yesterday did indeed take place on a sunny English afternoon amid much merriment, dancing and a bit of heckling. On arrival it quickly became apparent that the programme, as well intended as it may have been, was merely a very vague guide as to who was on. The timings contained therein bore no resemblance to who was actually playing. Silent Partners, billed at 2.15, were actually on at 1.30pm. Similarly, Domino Bones featuring Bez were nowhere to be seen at their allotted time of 3.30pm. Timetabling gripes aside this was a fun day out in a predominantly relaxed atmosphere.

The afternoon's entertainment on the main stage featured DJ's as varied as Mike Joyce and Andy Rourke ('The Only One I Know', 'Love Will Tear Us Apart', 'Fame'), Arthur Baker ('Dance To The Music') and Graeme Park ('Voodoo Ray', 'Bango Bango').

Tony Wilson came on stage saying that in half an hour he would be introducing the greatest English poet over the age of 20 but that now he was introducing the four greatest English poets under the age of 20 - RAW-T - the new act signed to his Red Cellars label. This was very brave because for the next 15-20 minutes his new charges were roundly booed and heckled. Their brand of 'grime' MC-ing did not please 15,000 fans baying for Happy Mondays. The talent and the tunes were definitely there though.

And so, after a brief interlude, the return of Happy Mondays to the stage. Unfortunately it was about 10 minutes after their return to the stage that the music actually began due to a technical hitch. Once things did get going it was a good show with birthday boy Shaun on form and Bez wearing some bizarre headgear. After each number Shaun seem very pleased announcing: "Fookin' ell we didn't fook it up!". He also (somewhat incorrectly it has to be said) declared: "Happy Mondays are sponsored by EasyJet".

All the hits were present and correct including Kinky Afro, Step On, Hallelujah and a mighty closing WFL. The Reverend Black Grape was also thrown in for good measure. And Shaun got nearly all of the words right too!

I Swear I Was There Stage

Twenty Four Records have just added The Others, The Long Blondes, Ian Seigal and Ratdog.

Happy Mondays will take to the stage for a very special live performance on a lazy, sun-drenched Sunday afternoon on Clapham Common, London. Tickets have just gone on sale and will sell out "almost immediately".

Shaun Ryder, June 2004: "For me this is about putting something back in. I've been working with Get Loaded and Kav for some time now and when the lads came up with the idea and said we'd be pushing loads of new bands as well, it just seem only right to be involved. I'm not dealing with corporate's here, I'm dealing with a group of lads who just wanna make something happen!"

Get Loaded In The Park is "as much about supporting new bands, ideas and concepts as it is about putting on The Mondays". Get Loaded promoter Kav explains this philosophy: "It's about giving new talent the chance to shine through - bands that possibly haven't had the opportunities, the money or the backing in the past to showcase their talents to a wider audience. Get Loaded in the Park is the opportunity of a lifetime and we fully intend to make everybody aware of our beliefs and what we stand for. We receive anything up to 100 CDs a day from unsigned bands, so the festival idea was the logical next step."

More DJs and Special Live Acts are still to be confirmed. For more information check out: www.getloadedinthepark.com. The full site will follow next week, with news, travel details, photos and biogs of all the acts playing.

Get Loaded started out life as a series of celebrity DJ sets at Turnmills in Clerkenwell, London at which Shaun Ryder made a number of appearances. 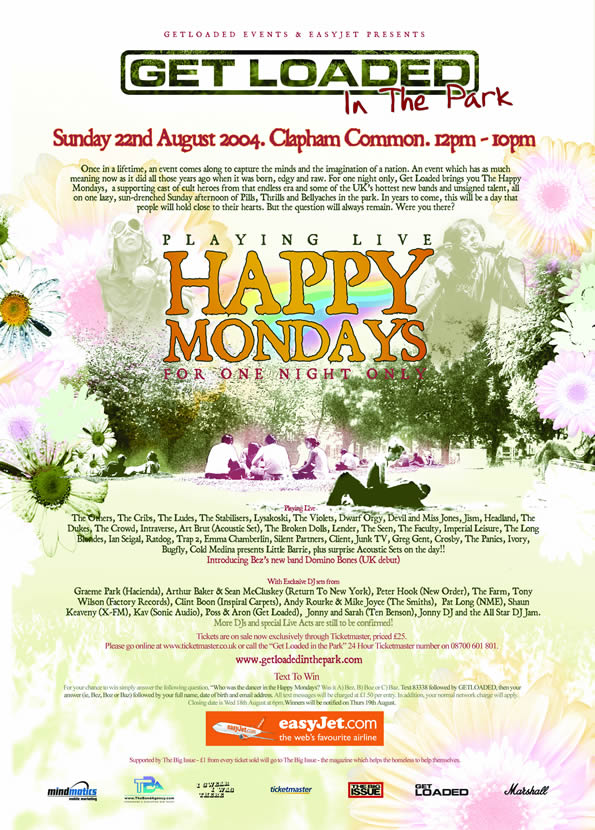 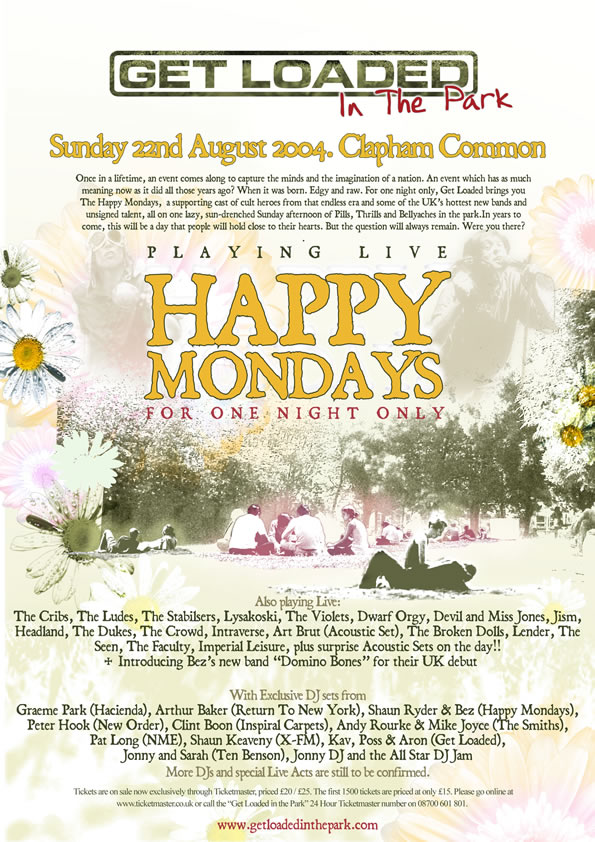