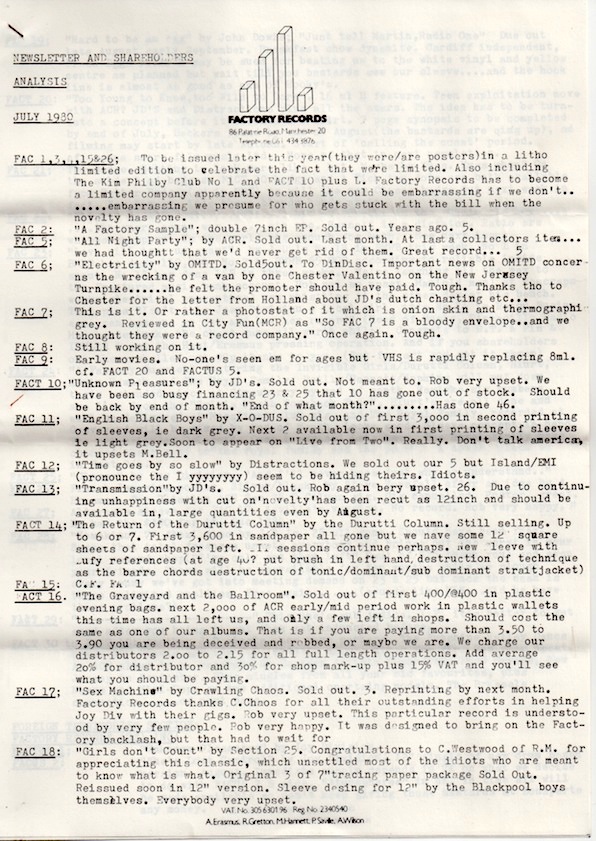 Transcript (from end of 1980 version)

Fac 1: Original Factory poster. Designed by Peter Saville. in yellow and black constructivist fashion and used for opening of the Factory club in May '78. Featuring Joy Division, the Durutti Column, the Tiller Boys, Cabaret Voltaire, Jilted John, Big in Japan and Manufactured Noise.

Fac 4: Third Factory poster covering December gigs. White on black drawn to left. All put up. It would be amusing to reprint 1, 2, 3 & 4; should cash-flow or distribution (posters) permit it may happen, and then again....

Fac 5: A Certain Ratio; 'All Night Party', & 'The Thin Boys' 7" single; 'rudimentary skills with more panache and imagination than most since the Sex Pistols' (Melody Maker), 'messy modern music' (NME) 'dark' (CF). 5,000 in May '79. Not sold out due to lack of response from the music press (ghouls). Only Savage of MM understood; and K Needs for the prime reason that when ACR played the Acklam Hall he was the only person incapably drunk as they were. A four (they look 'early' (H&Q )) piece they have now added a drummer , the funk direction, and are apparently selling well in San Francisco. See Fac 16.

Fac 6: Orchestral Manoevres in the Dark (sic); 'Electricity' & 'Almost' 7' 45 rpm. Cult hit, discos even. 5,000 in May'79 in black on black thermographed sleeves. Sold out. Record now licensed to Dindisc, Virgin's new label; to engage in the chart game as of Sep 28th '79. Necessity for licensing 'the best example of this to date'(NME) is regretted but the big stall holders seem to fill the square (chart shops) and subletting is an enforced activity. News; OMITD, both of them are about to signa major record contract, who with.... ask Chester Valentino. That's OMITD manager/mixer; he has changed his name. The boys are support on the Tubeway Army tour. Thanks, Gary; huh.

Fac 7: This is it; finished product will be thermographed grey on white onion skin paper, probably finished by 1981, maybe we can sell some.

Fac 9: Factory Flick; 8ml film, 12 minutes. Based on article in City Fun fanzine by Liz Naylor, 'No city fun' Music by Joy Division; FAC 9 also includes All Night Party, a three minute Lelouch/Popeye is erotic 30's poses montage with music by ACR. Plus Red Dress, a cartoon/animation/unlive action 3 minuter to music by Ludus. These films were shown at the Scala Cinema, Tottenham Court Road, London on September 13th '79. A showing at the Manchester Factory is being planned; also shown at Scala was another 8ml film by Malcolm Whitehead (The first three are by Charles Salem all about guess who..JD..includes live footage of JD at the Bowden Vale youth club doing Shadowplay and She's Lost Control. FAC FLIK plans... tentative..include an all speaking film by Mr Whitehead a spy / thriller / Joseph Conrad / suspense piece by Charles Salem featuring an ACR soundtrack.

Fac 9 (cont): Also planned 'In search of the lost chord' by Salem and Naylor. An SF sojourn through the mathematics of western tonal mathematics. Music by M. Hannett (partner and producer of 5,6,2a,2b,10,13,14,Spiral scraaatch etc NB to NB on Fac 7 - 'sell some' - work on Lost Chord is held up for understandable misgivings on the part of Miss Naylor on the question of this all pervading concept of 'product'. She wants to know when we're going to market toilet paper. Good question. Next.

FACT 14: The Durutti Column; 12" LP 33 and a third. Instrumental album by (as in composed/played) Vinny Reilly and Gordon Smith guitar. Produced by martin hannett, to be issued in Mid October in sandpaper sleeve plus Flexi disc test card by M.Zero. Confusacritic time.

FAC 17 & 18 & 19 & 20 & 21: see next issue. Fraternal greetings to jean-pierre Turmel, the Scala, City Fun, Final Solution, Naylor's abrasives, KTIM SF, Greg Shaw, Jurgen Kramer, Uncles Savage / Morley / Penman / Gill / Middles / Bell and of course Uncle John, and Auntie Mary, and Andy Schwartz, Printed Noise, Ed Bahlmann, Zercom/Pacific/R.T./V.W./ and everybody else without those valiant efforts we would never have been able to hire a lawyer. The only alternative to the spectacle becomes the spectacle of the alternative. Discuss.

FAC 19 John Dowie/"hard to be an egg" this has taken a long time to get out, but it has been worth it. Factory's first major assault on Radio Two. Secret deely sleeve concept. Of note: Hannett/Hopkins cello effects plus, Easter single tactic. Out late Feb early March.7" 45 rpm

FAC 20 "Too young to know...too wild to care". The film has become a video.. has become a series of surrealistic sketches. Will change again. No date No time.

FAC 21 The badge; April '81. Enamel and chrome "F" as in "fractured. Small. Black or maroon with silver/cream. Possibly. Contact Better badges, Jolly, Portobello Road..... and ask him about bootlegs. He can be embarrassed.

FAC 22 A Certain Ratio/"SFlight". Fine. Out now. Don't you feel bad about not buying FAC 5 when you had chance. Label on 22 was wrong due to consistent mind-changing over just what was the single track side. The one with the Bonne engraving IS "Flight". 12" 45 rpm

FAC 23 Joy Division/"Love will tear us apart" Available in 7" or 12". Sound quality on double B-side much better on 12". Obviously.

FACT 24 A FACtory Quartet/The Durutti Column, Kevin Hewick, Blurt, the Royal Family and the Poor. Double album.. Bit late; sleeve delays, lots of embossing. Four very different approaches to the idea of saying something. Vini&Kevin may do joint 4-set gigs in New Year. Blurt doing something for FAC BEN next and the Royal Family may get into xxxxxxxxxx. O.K. 2@ 12" 33 rpm

FAC 28 Joy Division/"Komakino", flexi disc. Now done 75,000. The "totally free at point of sale" device still working wonderfully stirring greed and disillusion in the anti-realistic heart. We give them in massive quantities to our two distributors who give them to shops with the instruction. Not for sale xx or as sales incentive. Watch commodities being created before your very eyes. 7" 45 rpm

FAC 29 The names/"Night Shift". Perfect new pop from Brussels. 7" 45 rpm. The Names already have single out in Belgium with Warner's Benelux. Oooooh. Picture sleeve apparently relates to the B side, it's people at a party having conversations. Could have fooled me.

FACT 30 Sex Pistols/"The Heyday" interview tapes by Judy Vermorel, mid '77. Should retail around £3.00. Can be taken as capitalist surge (if you don't know the unit cost) or cultural rehabilitation or ghetto crawling. 5,000 done for mid December release. Plus advert. Factory Records is this year having no party, sending no cards, and giving no presents. Instead we are taking an ad,,,,Happy Christmas. Cassette, pronounced cASS-ette.(M.Mac)

FAC 32 Crispy Ambulance/"Unsightly and Serene". 10" 45 rpm. Out now. Labels my be wrong way round on this one too...we cvan't check cause we pressed too few... ..sez Rob and we don't have any. We may have more. See Claud Bessy's English overview in last Slash for detailed understanding of inefficiency dialectic.

FAC 33 New Order, "Ceremony"/"In a lonely place" recorded at Eastern Artists New Jersey, at the mere cost of a van load of equipment. Are they Playing Shadowplay in Brookly etc. 7" and 12" 45rpm, release late Feb

FACT 40 Joy Division: "Still"; double album, one live, one full of all the tracks people keep complaining they haven't got..bleeding elitists.. ..etc..to seal the past, undercut the bootlegs and leave open the tree-lined avenues for 50 etc.

FACT 50 New Order... an album probably....or maybe just a nice picture of Hookey like what they had in Sounds. Demo's just completed for this one at Cargo. Latest on the announced gig circuit;"Middlesborough is a hole." Surprised.

Of particular note in this final portion of the Analysis is Fact 38 which is the unfinished and unreleased Below The Canal video by A Certain Ratio. The 'Factory Newsletter and Shareholders Analysis No. 5 September 1981' elaborates further on what this would have contained: "2 Hours. Early promos 'Forced Laugh'/'Shack Up', live from Music Machine and Heaven. 'Back to the Start', 'Crippled Child', TV stuff from Manchester and Milan, M. Shambergs 13 minute 'Tribeca' from the New York loft, plus art... lots of art. Post-synched erotica by Johnson. Available by December/January, same price and arrangements as 37 in similar apropos bridge bag with G&L flip-top convertible." The 'Tribeca' video clip eventually surfaced on Soul Jazz Records ACR enhanced CD compilation 'Early'.

FAC BN 3 Section 25: "Charnel Ground"; 7" 45rpm. November '80. According to our New Zealand correspondent if you turn the sleeve upside down the sand dunes look like a woman's armpit. Coffee table chick my arse.

FAC BN 4 Manhattan Project or Nicky ; single ind demo form at moment and singer writer may or may not be in London or NYC. Release uncertain.

FACT BN 7 Crawling Chaos; for afficionados of FAC 17...like me and Claud Bessy, an album of driving music from the North East. To be recorded, March.

FACUS 2 Joy Division; "She's lost control/Atmosphere" not to be confused with

FACUS 2 UK (which we forgot to mention above) which is "Atmosphere/She's lost control" has a uk at the bottom of the sleeve and is 25p hheaper in UK, though of course not in US,,,,rambling again

FACUS 4 A Certain Ratio: "Do theDu(casse)" 12 45rpm 4 tracks. Released from Berkely this month, selling in England with special sticker which explains that it repeats certain tracks from elsewehere and hopefully stops all those stupid bloody complaining letters like the ones about the blasted flexi discs. Recorded at Cargo and Graveyard 4 track.

FACUS 5 "Manchester to New York direct" 75" U-Matic 525 line video tape made June 1980 for use in Hurrah's /danceteria/Mudd/Rock Lounge etc. and now showing in Australian record shops. Features some material which will be found on 625 lines on FACT 36 and 37 later this year.

RECORDS Vini/D.C. to do single forJeanne Pierre Turmel/Sordide Sentimental and licensing deals continuing in farflung territories like N?Z., Finland..Italy....where there are a lot of bootlegs etc.

VIDEO Factory video unit virtually in action. So far a JVC KY 2000E plus a U)Matic portapac. Two machine editing to be installed as sson as someone works out the exact tidal structure of our cash flow in order to press enough "Ceremonies" and have the monies for a time base corrector and a desk to put it on.

AMERICA Apparently a returns policy is more important than beauty. It is being studied.

GIGS Up to the individual band. ACR only do two a month causethey have fragile personalities, New Order..I'm not sure cause I'm the last person to find out about their gigs. Blurt play for money,Vini for love. Some approaches can be made via R.Trade gigs...though as ever nothing is definite.

THE REVOLUTION: Get your hands on the means of production...the bleeding tools etc.....small investment in MVS, Chris and Nick, pressers of independent records to the cream now have own plant....ours is the plastic etc.

OUT OF STOCK PROBLEMS : or the stock problem. Records do sometimes sell out. The only way to avoid that is to print loads, displaying a) terminal pride in that you're so confident, or b) a wilful disregard of the role of capital. When they sell out it takes time to get them out. There's always too many or too few, never enough. For Christ's sake it's just like life. In the end everything happens. Perhaps we should start a religious sect. Great marketing possibilities.

Fraternal greetings to all interested enough to write, play or listen to the stuff. Fact 30 by the way is great, so don't believe a word the bastards say.

Thanks to Sebfact for transcription and David Chamberlain for imagery.