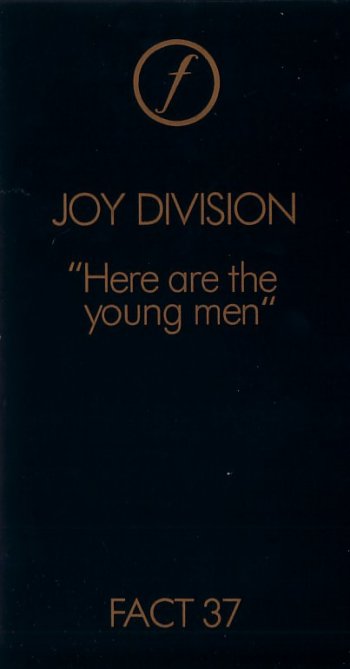 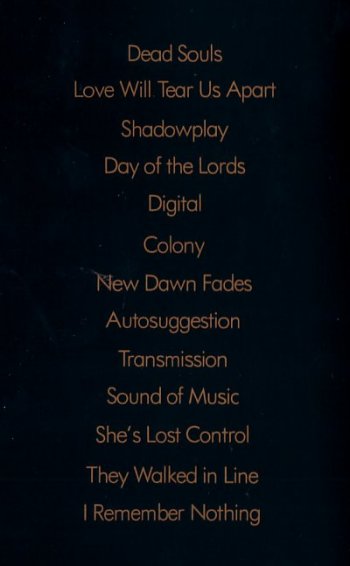 FACT 37 / Ikon 2 Here Are The Young Men; back cover detail

Here Are The Young Men is the first official Joy Division video comprising live tracks and, uncredited, the promotional video for Love Will Tear Us Apart. This video was given the Factory Catalogue number FACT 37 and was released on both VHS and Betamax in September 1982. Though it was FACT 37 in the official Factory catalogue it was also given the Ikon catalogue number Ikon 2 which in some cases appears on the video cassette itself (see below). Other versions have a 'Factory' F-symbol label which also features on the front cover.

Early copies were available in a cardboard flip-top 'cigarette-type' case whereas later ones came in a standard plastic library case with a card insert. In true Factory style there is very little information on the insert: the tracklisting, running time and music publisher (Fractured Music, Joy Division's publishing company).

On my copy of Joy Division's 'Unknown Pleasures' LP there was nowhere that told me the actual titles of the songs. It took me a while to figure it out but when I did, what a great conceptual joke by those people at Factory... unknown pleasures. Ha!

'Here Come The Young Men' (FAC 23, £12.50) (sic) featuring live footage from Brussels, Eidenhoven (sic) and Manchester still leaves me in the dark, in more ways than one. The titles are printed out of sequence and the band are filmed in the sort of dark cubby holes that make you think you'd have a more enthralling hour's viewing watching miners tunnelling down pit.

True, there are some scouring, rip-the-roof-off performances (though there are several lapses into the ponderous dirge for which the group are often remembered) but the power and dynamics of the music are accompanied by poor editing and shaky, hand-held camera work.

JD themselves probably don't help. Despite his bow-legged, knee-nobbling dance and arm flailing shadow-boxing (and, boy oh boy, are there ever shadows to box here), Ian Curtis was not the most charismatic of performers and his group were staid showroom dummies. It may seem like a good idea to just get out and film a band in its raw stages but if you're going to make something worthwhile it needs a lot more planning and expertise than the makers of 'Here Come The Young me' had available.

... but both videos leave me to conclude that Factory have never stopped playing those old conceptual jokes (what other company would give Crispy Ambulance a contract?). And although the slippery old fascist associations that have been made with previous products are now absent, they're still marketing the sort of stuff that most people would throw in the bin.

Let's hear it one more time for that old-style punk ingenuity.

Thanks to Simon for the loan of the video and to Brian for the NME review.