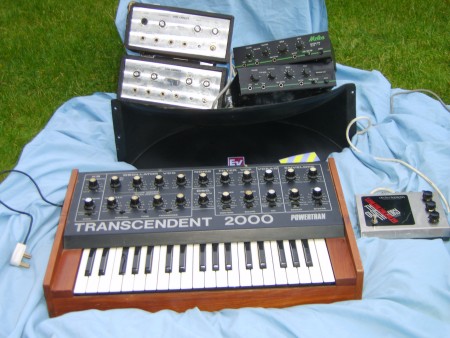 In 1978 Anthony Wilson brought a young band to Rochdale into the upstairs studio at Cargo Studios on Kenion St in Rochdale to record a track for a new sampler record for his fledgling Factory record label. The band was Joy Division containing bass player Peter Hook and the maverick producer for the Factory sessions was the late legendary Martin Hannett. Downstairs in Tractor Music Chris Hewitt was building PA systems and organising bands for the Deeply Vale Festivals. At Hannett's suggestion (Hannett was himself a bass player) Peter Hook went downstairs and talked to Chris about building him a custom bass set up for Joy Division using Amcron, Gauss and Alembic equipment. The recording session in Cargo and the bass set-up downstairs in Tractor Music would be the start of a long term relationship between Peter Hook and Rochdale which would eventually see him buying the studio with Chris Hewitt and running it as Suite Sixteen. Equipment for the legendary Haçienda nightclub was built and repaired in Rochdale and an endless stream of Manchester and Liverpool bands came to Kenion St to record and buy and hire equipment.

14 October 2008, Peter Hook talks about the Tractor Music, Deeply Vale HQ, Cargo Studios, Suite Sixteen Studios building on Kenion Street Rochdale: "It's amazing what effect that building had on my life! From the moment we walked in as Joy Division, already well aware of Cargo's reputation, to make some of the best sounding music we ever made! The fact that our song Atmosphere was recording solely in Kenion Street, and still sounds as good today as it did then, seeing the building used in the movie 24 Hour Party People, even owning it myself as Suite 16, and watching The Stone Roses, Happy Mondays, The Chameleons, The Charlatans, oh my god the list is endless, walk through those doors, the effect it had on Rochdale and the North West music scene is immeasurable, much the same that Ian Curtis had on Macclesfield.

I would like to see the building on Kenion St rise like a phoenix from the ashes, to inspire people all over the world, the way it did before!"

Thanks to Chris Hewitt for info and imagery.