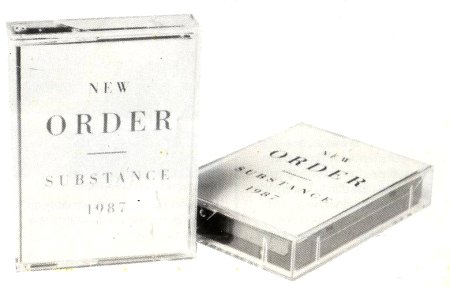 Factory Records pioneered the use of Digital Audio Tape as a commercial medium. It never really caught on as a pre-recorded format and instead found its rightful home as the tape of choice for musicians and journalists. This article from Q magazine around 1988 tells like it was in the beginning.

DAT (the new digital tape-recording system with the tiny tapes and non-degradable, completely faithful recording and playback capability) has yet to make itself commonly available in the UK, even though DAI players are on sale in the rest of Europe. Sony, who announced that DAT would be launched here last autumn, have had to postpone its introduction following pressure from the BPI, who are still keen to iron out the copyright problems / blank tape levies / Copycode situation. The irony is that retailers have had to import Sony machines from Germany to meet demand for DAT - which is at the moment almost entirely from the professional audio industry and not from private consumers, for whom the £1,130 price tag and the lack of prerecorded tapes are major deterrents. Even in Japan, DAT has failed to excite potential buyers as a domestic system and sales are below expectations.

Meanwhile, we may well have heard the last of Copycode - the CBS-developed system to prevent the digital recording of compact disc (outlined in Q12a). The National Bureau Of Standards in the USA have recently produced a fat report on the deficiencies and the stupidities of the system; it observes that the supposedly "inaudible" Copycode "notch" is, in fact, completely obvious and intrusive, that Copycode can be easily by-passed with defeat systems that cost only around £50, and that some Copycoded recordings were, oddly, easily copiable while other non-coded recordings unexpectedly shut down tape-recorders which had Copycode circuitry, The conclusions of the NBS have left CBS and the FPI and RIAA, the industry trade bodies who promoted the ridiculous scheme, with red faces and embarrassed stutters.

This, however, is not the end of the copy-prevention story. Exit Copycode, enter "Solocopy". "Solocopy", a system developed by Philips which was unveiled as long ago as April 1987 as an alternative proposal to prevent the 'abuse' of DAT recorders The system suggested that as a DAT recorder copied a digital source (eg CD) it should add an "anti-copy flag" to the information. Thus, although one copy could be made, no further copies could be made of the copy -the flag switching off the DAT when detected by special eircuitry. Ironically, Philips owned record company Polygram were major proponents of the CBS Copycode system, and very little has been heard of "Solocopy" since.

Following the demise of Copycode, however, plans are afoot to introduce an alternative system of inhibiting digital copying. It's a complex business, both technically and legally, and all kinds of shenanigans are going on between the many interested parties: the software manufacturers - record companies and their trade organisations and copyright agencies, and the hardware people - the European and Japanese manufacturers of CD and OAT machines. At the moment there seem to be no prospects of the confusing mess being resolved.

In the face of all this, the first commercially available DAT releases were put out acouple of months ago by Factory Records - The Guitar And Other Machines by the The Durutti Column (also available on LP, cassette, CD, VHS video, CDV and 5-inch CD single) and (a double DAT) New Order's Substance. Factory Records are courageously outspoken on the subject.

"We find the British record industry's negative attitude to DAT release ludicrous and counter-productive," they say. "1) The dangers of copying will only be fought off by a continuing attention to the fetishism of the artefact: the desire of the fan to possess not just a piece of music but a piece of the artist, by the purchase of the official item. Concentration on design, packaging, and the artist's role in this set of product imagery will inevitably render copying a minor irritation. Clearly, not to release on DAT will make DAT copying more - rather than less attractive, which is why we find the rest of the industry's Luddism so insupportable. The role of the artefact is clearly reflected in pre-orders for the new Durutti Column DAT of 1,000 together with CDV orders of 1,500, both figures way in excess of the number of machines that exist in the country. 2) Technology is a moveable feast. The unmatched sampling between CD and DAT, the imminent digitisation of Copycode and the development of one-copy systems will soothe all tears by the end of the year. And 3) Quite simply, you deal with Digital Audio Tape by using Digital Audio Tape not by slicking your head in the bureaucratic sand of the BPI."

Those Factory DATs in full

Factory Classical DATs were scheduled for release but there is no evidence that any were issued commercially.