Introduction
Scream City 2 was published in June 2006 a mere 4 months after the first issue. This production cycle proved to be unsustainable though as it was 2007 before the third one appeared.
Design inspiration came from my beloved Observer Book of Cricket with cover star Anthony Blunt (from the 'Gay Traitor' cocktail bar list) substituted for some vintage leather on willow. The private investigations of the contents were also summarised on the back cover, where detective "Ace McRisty" had everything on the QT. This image came from the 'Private Detective' pulp fiction archives.
Gonnie Rietveld and Steven Hankinson wrote quite contrasting articles themed around the twentieth anniversary of the Festival of the Tenth Summer. Steven's article about how the marketing aspects of Fac 151 were misjudged clearly touched something of a nerve because I was surprised one day at work to receive a phone call from none other than Peter Saville who wished to have a polite discussion about it.
David Nolan's 'I Swear I Was There' book was about to come out and #2 featured an extract and David explained why he wrote about the Sex Pistols' gig at the Lesser Free Trade Hall back in 1976. This, in turn, provided another connection to the Tenth Summer.
I met Greg Wilson at Cargo when he was DJing in support of A Certain Ratio on 11 August 2015. He sent me some of his mixes on CDR and then a while later told me he could put me in touch with Andy McCluskey of OMD if I wanted to do an interview with him for Scream City. I leapt at the chance and I met Andy for tea and a chat at his London hotel.
Haçienda Classics was an article that moist (aka Mikey Eastwood) had been itching to write for a long time which tells the story of the long-lost original compilation album. Ironically, in April 2006 a 2CD album called Haçienda had been released on Virgin/EMI.
Andrew James told me on completion of Scream City 1 - "I'll happily contribute another article. Working title is "Giving Alvar Aalto to the Kids", a rough guide to how to get a design education through music. My fee hasn't gone up, btw.
I also interviewed Larry Cassidy at Section 25's comeback gig in Poulton-le-Fylde and paired this up with a piece on Tony Ashworth's 4M project. Mike Stein interviewed Cath Carroll and that was a wrap.
Editorial
Many thanks to 4M, Paul Barnes, Cath Carroll, Matt Carroll, Amy Cooper, Steven Hankinson, Andrew James, Ben Kelly, Andy McCluskey, moist, James Nice, David Nolan, Ravello for coffee, Gonnie Rietveld, Dave Rofe, Peter Saville, Tom Skipp, Michael Stein, Section 25. Without whom etc.
Scream City.#2, June 2006. Published by John Cooper. 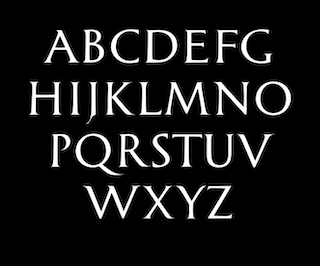 [Inside front cover by Paul Barnes. The letters from Joy Division's Closer were originally drawn by Hans Eduard Meier (b. 1922 Horgen, Switzerland). Peter Saville took them from Die Schriftentwicklung / The Development of Script and Type / Le développement des caractéres, published in 1959. They were they turned in a photosetting headline font. They have in turn been made into a digital typeface for the vinyl reissue of Closer. Meier's original letters are based upon the Roman Imperial form as used in inscriptions (such as on the Trajan column) during the first to fourth century AD.]

Ace McRisty; artwork by Steven Hankinson from a concept by John Cooper