The overall concept for Scream City dates back to about October 2005 and I'm sitting in a meeting which I think was about traffic signals and my mind started wandering to what else I could be doing instead (bad John! Ed.). I started to think about including more magazine-style articles on Cerysmatic Factory and from there got to "why don't I just do a magazine!?". Obviously the next question at that stage was "what do I call it?" and I started looking at anagrams of Cerysmatic and suddenly Scream City popped out. That was the easy bit. From there it was mostly about finding people who were willing to write articles on my favourite subject (but not necessarily theirs). After that the next most important question was "what's it going to look like?".
Christmas arrived and I was boring my family trying to explain why I thought doing a fanzine in 2006 when everyone was on the internet was a good idea. I was rummaging around in some cupboards and happened upon a childhood puzzle by Galt Toys called Picture Lotto. Instantly I loved the squared off grid layout and knew that this would be a good style to appropriate for Scream City in homage to the grand history of Factory Records.
My recollection of how this developed gets a bit sketchy from here to publication because the imagery I have appears to go from zero to completion in one step. I think this is explained by the fact I was using Paintshop Pro on a PC in the time before I had an iMac or Macbook. I can no longer access these files. Thankfully this means my amateurish graphic design skills will remain a secret. 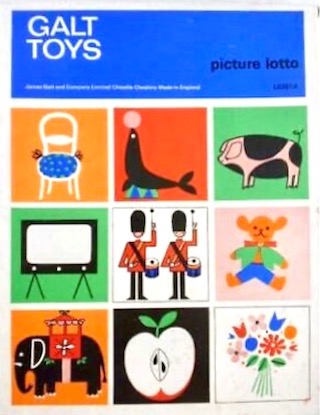