Scream City 3 saw the graphic design identity concept veer off from that established in the first two years. A slightly longer gap between issues perhaps contributed to this fresh approach.
In 2005 I had visited Lyon, France to participate in the Nuits Sonores festival with Tony Wilson and Matt Carroll. I met photographer Richard Bellia who took the photo of Tony and me plus a few others. On return to England, Richard suggested we go to Brentford to meet his friend Push aka Chris Dawes, a music journalist known for working at Melody Maker during its heyday and Muzik, a award-winning dance music magazine. So we all met at Push's house which was in the streets adjacent to Griffin Park, the home of Brentford FC (my dad's boyhood football team).
The conversation turned to a metal award comprised of two apples and a banana and Push explained that this was the In The City Music Award given to him during his time at Muzik. In The City was, of course, the music industry awards held in Manchester which were founded by Tony Wilson and Yvette Livesey. The award itself was created by Central Station Design and thus the Scream City 3 article 'A Cock and Balls Story' was born.
Richard took the photo of the award and I passed this on to Matt Carroll of Central Station who treated and coloured it so that it was fit to grace the cover. Push and Matt told the story and Peter Walsh contributed another photo of Tony holding the award.
There was never any doubt in my mind that this would be the cover story of Scream City 3. The bold, brassy and frankly bawdy image deserved a typeface to match and I found the perfect match in Alba Super.
The back cover story is not quite so complicated. I had already worked out that "MCR Sea City" was going to be on the back cover and Salford Quays seemed the logical place to take the photo because it's where the Manchester Ship Canal begins. So, on the occasion of a trip to the Imperial War Museum North I took the quayside landscape with the museum in the background. The layout is inspired by Good Housekeeping's 'Colour Cookery' 1969 (from a lunchtime Tate Britain visit). Sadly that image didn't make 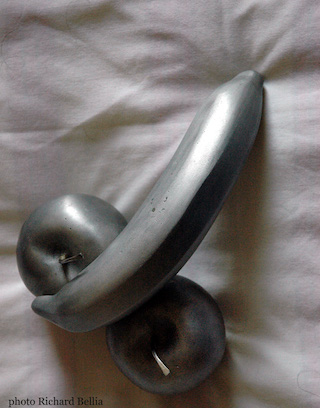 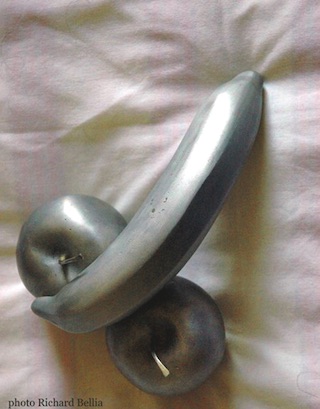 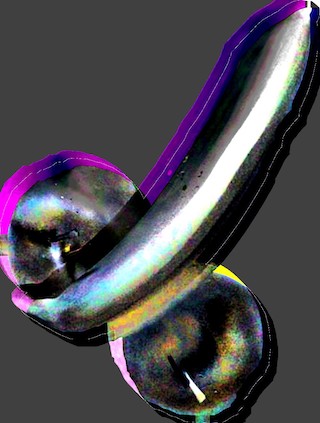 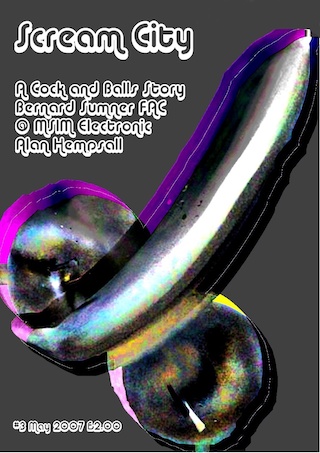 Scream City 3; first versino of cover with additional text which was subsequently removed 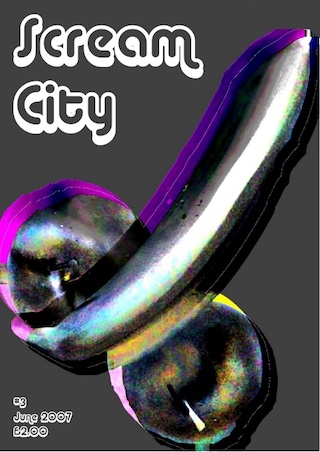 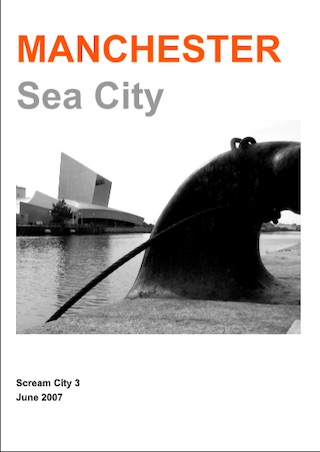 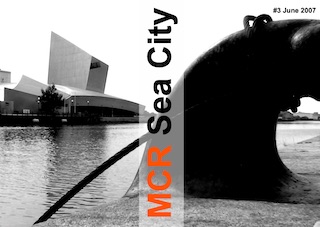