Introduction
Scream City 3 was published in June 2007 1 year after the second issue. I discovered that making fanzines is not an easy thing to do and gradually the gaps between issues got longer and longer. This was the one with the seventies porno cover and so the use of Alba Super for the title and inside cover contents page seemed de rigueur.
David Nolan's 'Confusion' book on Bernard Sumner was about to be published and Scream City had an exclusive extract. Not to be outdone by David, Andrew James also kept up a 100% record for appearing in Scream City with his Field Trip to the Factory Archives piece which had a sister article in the form of Jan Hargreaves's (now Hicks) on MoSI's (now Science and Industry Museum) Unknown Pleasures. Looking back on these articles from 2007 in the context of an exhibition finally happening with some of the material held by the Museum makes clear the importance of the role that archives play in preserving musical history. Sadly Tony Wilson died just two months after this edition was published and, in 2009, his archive was loaned to the Museum...
Aloysius Munn (whoever he was!?) returned to the Scream City fold with an interview with Ian White of The Wendys which was conducted by electronic mail using the Internet (how novel!).
Someone who had already chosen to ditch their pseudonym was Michael Eastwood who provided a second article on Fac 51 The Hacienda. Writing as "moist" in issue 2 he had contributed 'The Hacienda Classics' and now he brought forth 'Ghosts of the Hacienda'. Michael's article tied into the 'Ghosts of the Hacienda' event which took place at One Central in Manchester on 21 May 2007.
Matthew Robertson, the author of Fac 461 Factory: The Complete Graphic Album, presented a critical review of the graphic design that Electronic used over the course of three albums with three different designers (Peter Saville Associates, 3a, and Johnson Panas).
David Nolan took the lead in Scream City Article Stakes with his Alan Hempsall interview enigmatically entitled 'A Kick Up The Nipsie' before John Cooper (whoever he is) rounded things off with the cover story 'A Cock and Balls Story' which hinged on the discovery of an In The City Music Award at the house of Push when in the company of Richard Bellia the photographer. Push, or Christopher Dawes to give him his full name, worked at Melody Maker back in the day, won the award whilst at Muzik magazine and now regales us with the marvellous Electronic Sound magazine which in 2019 gave us a whole issue devoted to Factory Records. Funny how things come full circle... 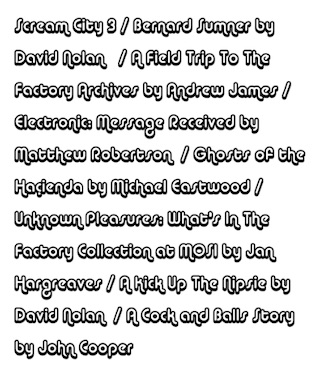