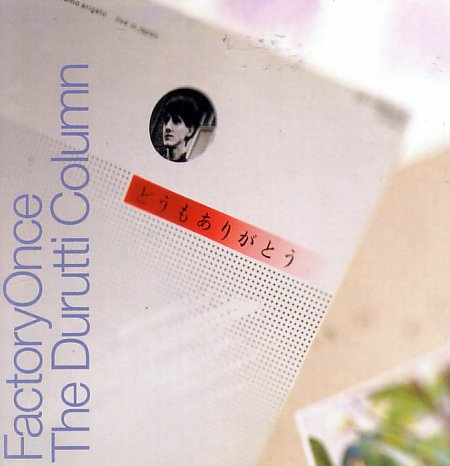 All tracks written by Vini Reilly. Produced by Durutti Column and Anthony Wilson.

Our Lady of The Angels, written by Vini Reilly. Recorded by Stuart James at Amigos Studio, North Hollywood and mixed by Stephen Street at Strawberry Studios, Stockport, England. A Factory Communications Record 1987. [From Fac 184]

When The World (Newson Mix), written by Vini Reilly. Recorded and mixed by Stephen Street at Strawberry Studios, Stockport, England. A Factory Communications Record 1987. [From Facd 194]

With thanks to Tony, Bruce.Graphic Magicians: 8vo, London

Home from home in a Tokyo car park

Why was it so hard to get served in this bloody Japanese restaurant somewhere in a far flung suburb of Tokyo.

We'd been waiting twenty minutes since ordering. Finally the manager came over, very apologetic as only the Japanese can be; our two waitresses were giggling and in shock in the kitchen because 'Vini Reilly' was actually in their restaurant and were so excited they were unable to come out and serve us.

It was a fun / strange tour, that trip to Tokyo. Bruce Mitchell explaining to me how to deal with our Japanese partners, just keep explaining your point, again and again and finally someone will say "Hai" and you're on your way.

I was trying to get two 35mm cameras instead of 6 video cameras to film the Durutti Column gig and it only took me two and a half hours of repeating this to get a "Hai". I preferred waiting for the food.

The DC entourage that had built up for the 'Without Mercy' album had slimmed down to a wonderful core of Vini, Bruce, John Metcalfe on viola and Tim Kellett on trumpet. They'd done three definitive gigs at the Electric Cinema on London's Portobello Road and I was praying that we could capture that once more in Japan, with tape and camera. We did.

Thank you. Or Domo as they say out there.

Mixing down was fun; we were on a flight out next morning so the wonderful Takao Homma at Nippon Columbia hired a mobile studio recording truck. We mixed from midnight till 6 a.m. And it was another of those warming technological experiences; brought the strangest of foods throughout the night in those lacquered lunch boxes that seem to dominate Japanese working life, while we worked with the most familiar of equipment -- the desk was emblazoned 'Amek, Salford, England' and the outboard was all 'AMS, Burnley, Lancashire'. Home from home in a Tokyo car park.

And by the way this is a CD; and has only ever been a CD; we reckoned it was the first CD only release in the UK when it came out the following year. And it was the note on which that whole trip had started; arriving late at night off the plane and taken by Takao to plug in the first CD player I'd ever seen and listen to ...... 'Power, Corruption and Lies' a test sample straight from the Denon pressing plant. Wow.

And then there was the trip to LA; getting Vini and Bruce a limo from the Hyatt to the Whiskey; 600 yards. We thought we'd go into a studio while were were there; I think it was Milo who sorted it.

There was this cool LA lady -- I'd met her at a New Order gig the previous summer and played Pac-woman with her and fancied her and failed miserably and Peter S. even asked me if, as I was doing so badly he could try instead and she was in a bunch of bands, and we got her to come and sing with Vini and her name is Debi Diamond and that's about it.

And 'Our Lady of the Angels' is Vini's tribute to that wonderful wonderful town. I didn't know my Franciscan history I'm afraid and the whole thing was only explained by reading Reyner Banham (thanks Mr Savage for yet another one), and discovering that the City of the Angels is in fact "El Ciuidad della Nostra Senora de Los Angeles de Porciuncula". LA for short. And the track is indeed a short cut to Mulholland Drive.