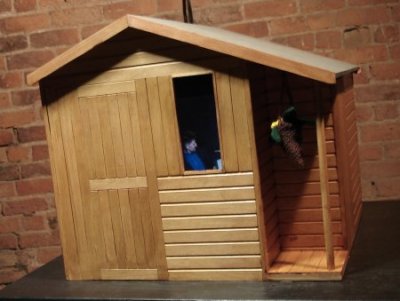 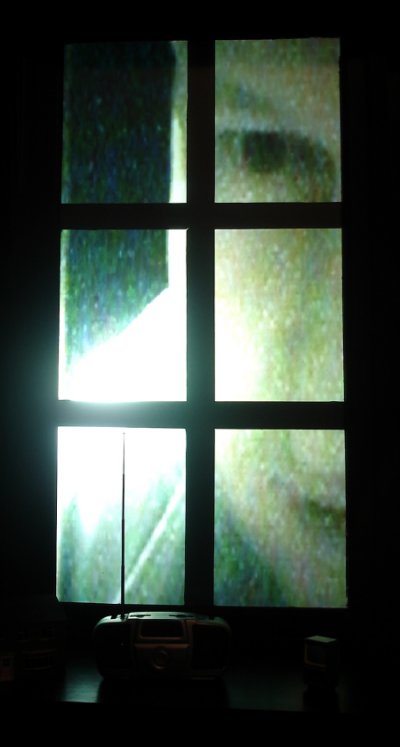 From StoryRooms.net: "A group of internationally renowned media artists brings surreal, poetic and thought-provoking installation environments to Manchester, that invite you to explore the ways we now communicate with each other and with technology."

As one travels up an elevator of glass and steel to be deposited on the top floor of a lovely old wooden warehouse (c. 1830) the stage has already been set for a dislocation of time & space; a dichotomy between the here & now, and the there & then. A fine metaphor for the StoryRooms exhibition itself; installations that use both ages-old visual puns and cutting-edge technology, three of which (out of seven) that I found particularly satisfying.

Curator Andrea Zapp's own Human Avatars (incorporating specially commissioned long-form dub tracks from Durutti Column's Vini Reilly) is strikingly surprising in its use of hidden, and perhaps to the museum-goer / interacter, unknown, surveillance that creates a loop between viewer and viewed. Consisting of two huts, divided and hidden from one another within the museum galleries, one is encouraged to enter and relax within the larger hut, a refuge of privacy and personal space, with the Vini Reilly music echoing around one with stunning stereo effect, initially unaware that they are being viewed from afar at a miniature version of the hut. I say initially unaware, as a rather unsettling video projection on the window changes from what one could describe as a video sky into capturing the looming face of a viewer from the other room as they peer into the tiny reflected projection of the interior of the large hut within the smaller one, as they themselves are caught by a hidden camera. Once this has been discovered, what was once a refuge now feels like a cage, albeit one that has been designed for human inhabitation, and one is now the animal on display, the perceived sizes of the huts switching over and back in one's mind. (Luckily, there IS an open door.)

Tan Teck Weng's Panopticon, plays upon the child within all of us (at least at first), with its miniature (and hidden within a tiny black box) tableau of an imaginary room that could have possibly once existed in the gallery space itself. The viewer can shake the box and re-arrange the magnetised furniture contained within, all the time while a projection creates a large scale vision on the walls, bringing the room back into its intended place around you. The simple (yet ingenious) use of a fixed camera inside the box allows the furniture to seem animate, flying pell-mell in all directions, while the projected room holds steady, often ending up defying one's perceived sense of gravity. Any sense of fun is tempered by a sense of foreboding as each shake of the box results in an (unintended?) act of violence and one is left uncomfortable in its aftermath and our complicity in having caused it.

And finally, Paul DeMarinis' The Messenger (which is much more beautiful and complex in this installation than the photos provided on the website): three receivers translating the artist's email (one letter at a time!) into an either visual or sonic equivalent. Electrolyte jars containing a sickly / beautiful green liquid bubbling slowly and mysteriously as current pulses through them; skeletons snapping uncomfortably, each letter its own death dance; and the wholly intriguing set of enameled bowls wired for sound and perched atop wooden chairs, sitting in a circle facing inward, mumbling quietly to one another in Spanish; a private world that we've been allowed to observe yet purposely blocked by artful impediments that disallow our complete immersion within it.

The public and the private, and the overlap (or not) of the two. The line between the two is drawn, then redrawn, if not then followed by a complete erasure. From the home recordings of Vini Reilly to the personal email of Paul DeMarinis, we are given a glimpse into secret worlds and then forced to offer up part of ourselves in return.

The installation soundtrack by Vini Reilly will be published with the exhibition dvd early in 2006 with Arts Council funding. Register your interest on the official website via the contact form.

Vini Reilly's music for the installation consists of three specially commissioned pieces lasting approximately 12 minutes each. The music plays on a loop so if one stays long enough at the exhibit, it is possible to hear the complete song cycle. The compositions use elements of material which features on the album 'Keep Breathing' [Artful / FullFill, 2005]. 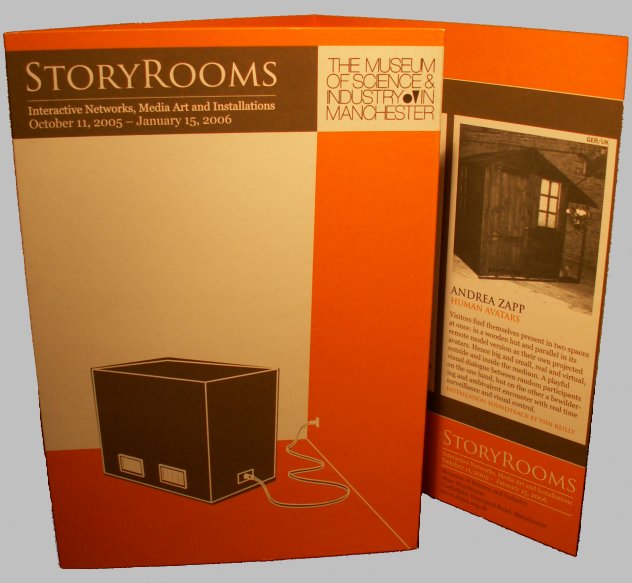