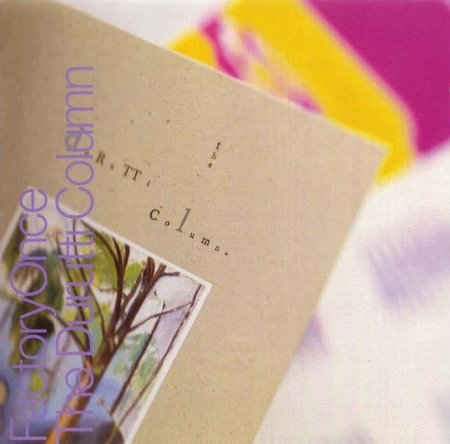 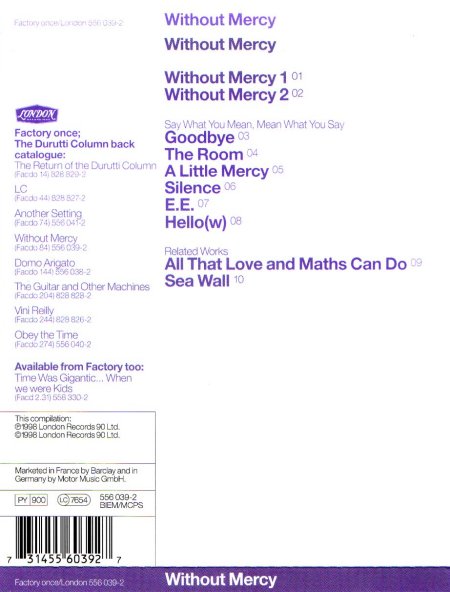 FACDO 84 Without Mercy; back cover detail

Say What You Mean, Mean What You Say

All That Love And Maths Can Do *

From Hommage a Duras compilation on Interior Music

All tracks written by Vini Reilly. Produced by Anthony Wilson and Michael Johnson.

All songs written by Vini Reilly. Produced by Anthony Wilson and Michael Johnson. Recorded at Strawberry Studios, Stockport. Engineered by Michael Johnson, assisted by Tim Dewey and Nigel Beverley. Mixed at Britannia Row, London. Published by the Movement of the 24th January.

Say What You Mean, Mean What You Say

If in doubt, repeat yourself

It was the fascist architecture that proved to be the final straw. My temper had been rising throughout the evening, a sell out gig, two thousand fanatical Portuguese Vini fans at some Lisbon College theatre, obviously built in the good old days of the Portuguese Generals.

What had got me going was the fact that Vini and Bruce were doodling along on stage the same way they had been doing for at least two and a half years. Same bloody stuff; like John Cooper Clarke doing a college gig in 1990. If in doubt, repeat yourself. It was too bloody easy

And when the entire audience came to its feet on Bruce's 'drum solo' in 'Jacqueline', well, I mean, a fucking drum solo. When you're pissed off and everyone else is loving it, you get really pissed off. Shakespeare used to do that with filthy jokes just before a coming tragic death scene to wind up the part of the audience that wasn't pissing itself with laughter. The applause for the drum solo certainly wound me up.

It was the same with recording. Vini's third album, 'Another Setting', while strangely providing some of the DC standards that Vin would be playing a decade later, merely trod the same ground as 'LC' and took nothing forward. It was time for a change.

A few months earlier we'd been approached by three classical musicians, kids from the Royal Northern College of Music and Manchester University. A trumpeter, a saxophonist and a ...... "Has Factory got any work for us?" - "Who knows, maybe ......"

Factory had also struck up a relationship with the wonderful Pete Hadfield acting for statuesque cello player, Caroline Lavelle. (Where's the bloody tape, Pete?) An idea formed; a group of musicians for Vini to create for. Add to the mix Blaine Reininger from the Belgian connection - always on hand with his Michel Duval impersonations and electrifying violin work. The first meeting was at Alan and Annie's farm in Cheshire. "Actually we get more people at the farm than at the Hacienda", said Mr Erasmus for the Channel Four documentary while riding round a nearby field on the back of Hooky's trial bike.

And the final ingredient turned up on the first day at Strawberry when the brass section brought along their 'arranger', the diminutive but 'taking no shit' Mr Metcalfe whose viola playing became such a part of the next cycle of Durutti work.

Central to the whole project was trying to get Vini to spend more than three days recording an album, to try and slow down the process. It took five days which has to be counted as an abject failure.

Plus getting to hear Vini and Blaine do an ultra heavy 'Sweet Jane' a couple of times at soundchecks was worth the admission.< /p>

Worth the admission to the reissue is the inclusion of the tracks from the 'Say What You Mean...' EP, released as a 12" vinyl single. The session for this collection took place at Revolution in Cheadle a few months after the 'Mercy' sessions and already show the slimming down process and the core musicians of the mid 80's Durutti Column coming of age. Basically it was the Manc kids. What's new.