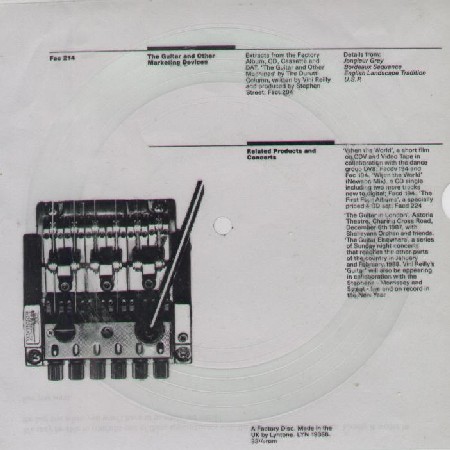 The Guitar and Other Marketing Devices

Extracts from the Factory Album, CD, Cassette and DAT, 'The Guitar and Other Machines' by The Durutti Column, written by Vini Reilly and produced by Stephen Street; Fact 204

'When The World'. a short film on CDV and Video Tape in collaboration with the dance group DV8; Facdv 194 and Fac 194. 'When The World' (Newson Mix), a CD single including two more tracks new to digital; Facd 194. 'The First Four Albums', a specially priced 4 CD set; Facd 224

'The Guitar in London', Astoria Theatre, Charing Cross Road, December 6th 1987, with Shelleyann Orphan and friends. 'The Guitar Elsewhere', a series of Sunday night concerts that reaches the other parts of the country in January and February 1988. Vini Reilly's Guitar will also be appearing in collaboration with the Stephens - Morrissey and Street - live and on record in the New Year.