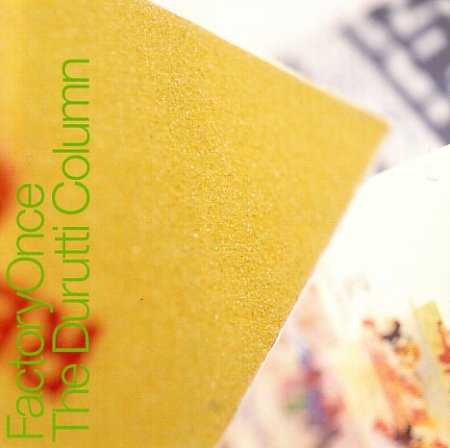 Facdo 14 The Return Of The Durutti Column; front cover detail

Lips that Would Kiss and Madeleine, written by Vini Reilly. Produced by Martin Hannett. Published by The Movement of the 24th January Publishing / Zomba Publishing. A Factory / Benelux Record 1980.

Sleep Will Come, written and produced by Vini Reilly. Vocals by Jeremy Kerr. Published by The Movement of the 24th January Publishing / Zomba Publishing and Copyright Control. A Les Disques Du Crepuscule Record 1980.

Experiment in Fifth, written and produced by Vini Reilly. Published by The Movement of the 24th January Publishing / Zomba Publishing. A Les Disques Du Crepescule Record 1980.

The first album by The Durutti Column originally came in the now legendary 'sandpaper sleeve'. This was a nod to situationism whereby keeping the record in your collection would physically damage your other records. Of course, the record could be fitted into an outer plastic sleeve and your other records would be safe. Sandpaper sleeve copies also came with a bonus flexidisc (by flexidisc kings Lyntone) Fact 14c entitled 'Testcard' and featuring two tracks written by Martin Hannett.

Of course, as with many other Factory releases, catalogue number duplication rears its head. The number Fact 14c was also the catalogue number for the boxed cassette edition of the album several years later.

The vinyl album was also repressed in a slightly re-recorded version and reissued with with a black sleeve featuring an inset of a painting.

To bring the album into the compact disc age, it was re-released as part of FACD 224 The First Four Albums, a 4-cd set featuring, er, the first four Factory albums by The Durutti Column.

After the demise of the original Factory Records, the album was reissued again on compact disc under the Factory Once banner with the catalogue number Facdo 14.