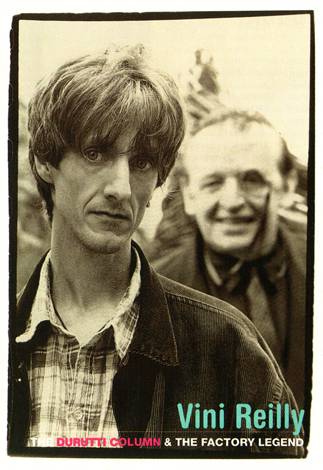 On Jan 24, 1978, Tony Wilson, then and now working for England's Granada TV, decided to sink some money into the career of a Manchester artist named Vini Reilly. Though a veteran of the punk wars, Reilly had almost a classical way with the electric guitar. In October of that year came the infamous Factory Sample EP, which introduced Joy Division, Cabaret Voltaire, and Reilly's Durutti Column, along with the Factory label, and pointed toward a new era of intelligent post-punk music for the '80s.

After 16 albums and innumerable recordings on Sordide Sentimentale, Factory Benelux, and Materiali Sonori, Reilly is back with Factory, now called Factory Too after its demise nearly two years ago. His comeback effort, Sex & Death, is a great Durutti Column disc, full of blues, rock, pastoral English bliss, and gorgeous guitar. And, in the Factory tradition, it's a milestone of sorts: Where Durutti's 1985 album, Domo Arigato, was possibly the first album released only on CD, and their Guitar & Other Machines marked their first commercial DAT release, Sex & Death is available simultaneously on audio CD and CD-ROM, as well as from an Internet site.

"I remember recording a thunderstorm outside my French window at five o'clock one morning," Reilly says "and overdubbing by playing a Strat straight into a Lexicon, pulling that onto another DAT, and then bringing the whole lot into the studio to use as a backing track for a Spanish guitar lead. Three or four pieces were done in that kind of a way. [New Order bassist] Peter Hook lives around the corner, so he'd pop in occasionally too." Other guests on the album include violist John Metcalfe, drummer Bruce Mitchell, and three vocalists, with Morrissey man Stephen Street producing.

Despite the emphasis on guitar, piano and synths integral to Reilly's process. "I still write on the piano, although that's a misnomer because when I get to the piano the music arrives fully formed. When I was young I met a German lady who helped me enormously. She was a guitar teacher whose main pre-occupation was medieval music played on crumhorns. When she heard me playing the guitar in the wrong key with the wrong timing she felt the best thing was to get me to understand how to achieve what I wanted. She had a spinet, a small harpsichord, and for over 12 years, from the time I was nine, she exposed me to culture on a broad level: Bach, Martinu, painters like Yves Klein, that kind of thing."

Though he has recording gear in his Manchester home, Reilly usually makes tracks at Out Of The Blue, a nearby studio. "There's an engineer there, Nick Garside, who really knows my equipment," he explains. "I'm halfway through doing a dance/trance album, which I was inspired to do after hearing Orbital. I'm interested in the sounds and textures of that music, but used in a more musically interesting way. I've got a Mac, and a Rhodes MK-88 is my master keyboard. I play it with both hands, triggering old analog synths like the EMS, a Minimoog and an Oberheim Matrix-4 through one of those Kenton MIDI-to-analog converters. I also use a Mellotron, an Akai S3200 and S900, and a Roland TR-808 and various other drum machines. I've got loads of guitars, which I play directly into the sampler. My main Strat is heavily customized for echoes and delays, with very sensitive pickups."

For much of his life Reilly was an anorexic. Recently doctors began phasing him off the debilitating regime of tranquilizers he's neen on for the past 20 years. "There was a problem for a long time," he admits, "but now I'm ready to tour every capital city in Europe and do America as well."

Thanks to Andrea Bianco for media