The Durutti Column > The Sporadic Recordings 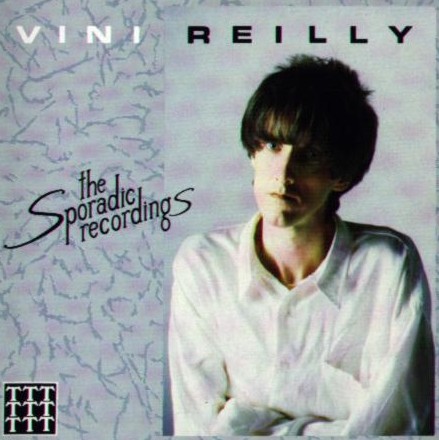 The Sporadic Recordings, A TTTTTTTTT'S RELEASE. Limited Edition of 4000, not sure how many were signed like this one. Features tracks such as Shirt No. 7 (for Pat Nevin the Scottish footballer), For Steven Patrick (for Morrissey) and Rob Gray's Elegy. Total running time 72.25, 28 tracks. Credited to Vini Reilly and not The Durutti Column.

At the end of the last track there is an audio clip of Vini Reilly at an international border checkpoint. The immigration official can be heard asking Vini what he does for a living. Vini replies that he is a musician. The official asks what type of music. After barely a beat Vini replies 'Avant garde jazz classical'.

1. Buddhist Prayer  Played on Charlie's L14 guitar after reading 'Page after Page' and not being disappointed. Starring Japanese monks.
2. Pathway  This is how far you can 'pull' strings before they (or your fingers) snap.
3. Nile Opera  Starring Egyptian drummers discovered in Andy's obscure C.D. collection.
4. Shirt No. 7  Starring a vintage semi-acoustic Gibson 'Stereo-Switchmaster' -- not plugged in.
5. Kind Of Love  Jazzers would call it syncopation but the time signature was irretrievably lost two bars in and never found again.
6. Rob Gray's Elegy  Starring Rob's harmonica and Jeremy Kerr's bass.
7. Misere  Starring the most beautiful voice EVER.
8. For Steven Patrick  ...for Steven Patrick with love and affection.
9. We Stumble  Recorded in Belgium for Michel Duval.
10. Sketch For A Manchester Summer 1989  The essential Mancunian summer, captured on DAT before the greenhouse effect changes the climate irrevocably.
11. Arpeggiator II  Starring a now obsolete gimmick.
12. Diazepam 5 mgs  (Enough to relax you.) Starring a very expensive Bosendorfer piano played on a very cheap synth.
13. But Was I...?  An attempt to disguise voices through the S.P.X. 90 mk.1.
14. Pol In A-flat  Played through an ancient Space Echo, therefore the hiss is compulsory.
15. Real Drums -- Real Drummer  Starring Bruce Mitchell demonstrating the inadequacies of computer generated drums.
16. Another Mirror -- Another Wall  Another Michel Duval project. Another song with these lyrics, starring Pol's voice and Alain Lefebvre's congas.
17. 30 Oldham Street  In praise of DRY's decaffeinated coffee and in spite of Leroy's jokes.
18. 4.10 am  Recorded then.
19. For Lydia  Voices and flute played on a keyboard.
20. Detail For Heidi And Jodie  Played on a Yamaha owned by the recipients of the tune.
21. Zinni's Dance  Bruce's daughter's birthday tune. Played the way she dances, -- out of time.
22. PPP Version  Based on a description by Anthony H. of a park in Hong Kong.
23. For Lucy H.  Dedicated to a very nice old lady who lived and died alone. Starring the trumpet of Kaire Gedal.
24. 4.30 am  Slightly later the same morning.
25. It's A Bright Guilty World -- Part I  Inspired by an Orson Welles interview.
26. It's A Bright Guilty World -- Part II 27. Nile Reprise  See Track 3 28. Diazepam 10 mgs  Enough to send you to sleep?