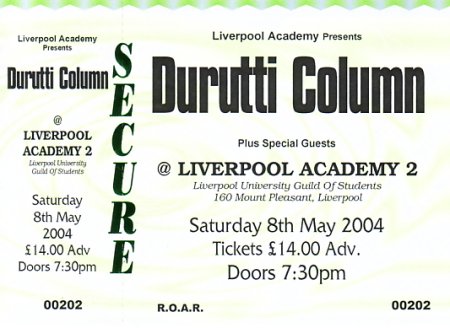 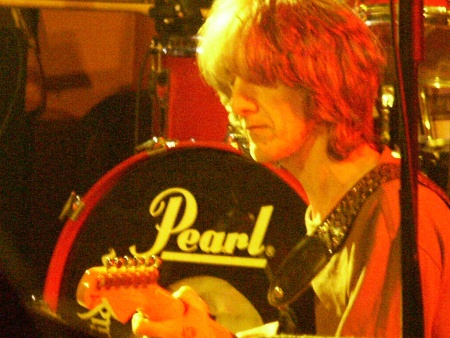 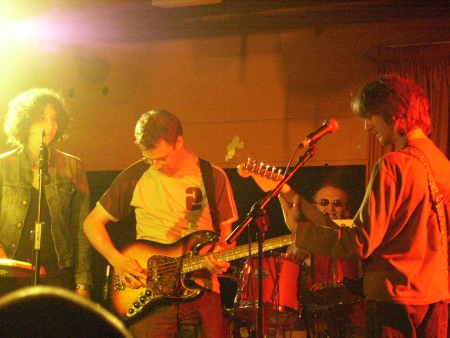 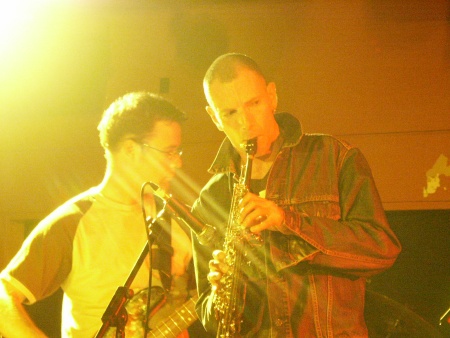 The Durutti Column - Liverpool Academy 2, 8 May 2004; Keir Stewart and Ray 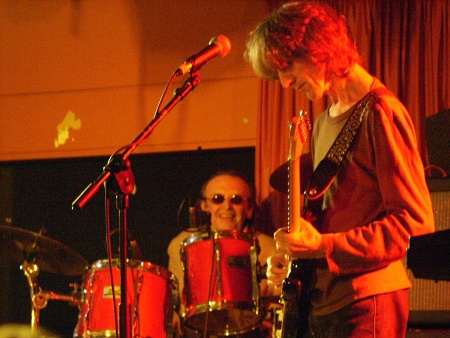 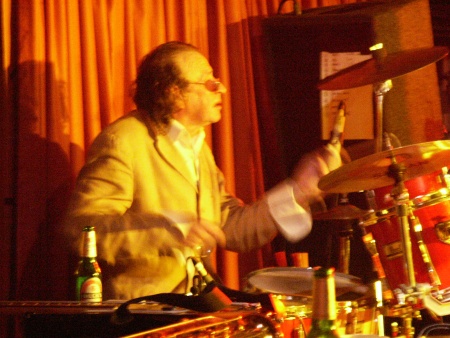 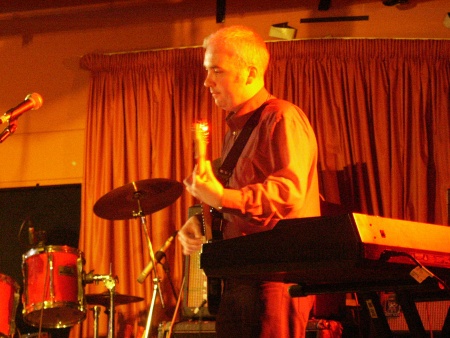 The Durutti Column played live on Saturday 8 May 2004 at Liverpool Academy 2. Support came from Mark Tranmer (aka Gnac).

An intimate (i.e. small) venue in the Liverpool University complex, the Academy 2 turned out (once we found it) to be the perfect venue for those new rock behemoths The Durutti Column. We arrived just in time for support act Mark Tranmer / Gnac after a superhuman dash up the motorway. Mark and his friend played a short set comprising new tunes off 'Scoop Of Ice Cream Moon', a Kookydiscs single from the late nineties (dedicated to Phil and Alex Kooky) and some other fine, melodic, trancey guitar instrumentals. Mark somewhat threw the audience by asking "Does anyone like Agatha Christie?" before the last number, the stunned silence bringing the follow-up, "OK, forget it".

Vini began the main event in his own inimitable style, playing the solo guitar piece 'For Rachel' whilst promising to get louder later on. Bruce Mitchell on drums, Keir Stewart on bass and Vini's girlfriend Rachel McFarlane (triggering samples) joined Vini on stage for a rousing 'Otis'. Surprise guest Ray from Spiritualized who according to Vini had turned up unannounced and completely unrehearsed added saxophone to third track 'Never Known'. Bruce and Vini jammed away on 'Jacqueline' which had a slightly harded and louder edge to it than in recent times. Bruce told me afterwards that this is the direction Vini wants to go in and that he was wielding the drumsticks with slightly more vigour.

Throughout the set there was some friendly banter from the crowd (or 'shouting out' to give it its proper title) with persistent calls for 'Tomorrow' which went unheeded.

Introducing 'Voodoo Chile' which was first aired at the Islington Academy back in April, Vini said "Feel free to laugh if you want". Fear ye not as it was another truly spectacular version. This led later on to calls for 'Shaft'(!).

The closing trio of numbers, 'The Missing Boy', 'Requiem For My Mother' and 'The Beggar' were extra special. Vini thanked the audience for coming. The band returned for Revolver at which time the volume was cranked up even louder.

["I'll try to play the right notes"]
For Rachel [Vini demonstrates what no other guitarist can do]
Otis
Salford [featuring Ray Dickaty, ex-Spiritualized on on saxophone]
Jacqueline ["Bruce Mitchell! With a broken finger!!"]
Spasmic Fairy [Keir: "There's gallons of reverb on this mic... to smooth over the mistakes"]
Woman (aka Sea Line)
Somebody's Party (aka Party) [Various wags in the audience: "Tomorrow!", "Sketch for Summer!", "The Guitar and Other Machines! The whole of it!!"]
Voodoo Chile [Vini: "The best tune we're gonna play all night and we didn't write it"]
The Missing Boy
Requiem For My Mother (aka Mother)
The Beggar ["Thank you very much"]
- -
Revolver [Peter Finch: "... a dollar buys a nickel's worth", Keir and Bruce attempt to lipsync to the now customary introduction to the encore]