The official Santiago Alquimista website has full details of this gig (and the one in Oporto) including an image of the promotional poster.

There is a review of this show (in Portuguese only unfortunately apart from a few words spoken by Vini) and a picture at: A Tenda dos Indios - Rockblog. 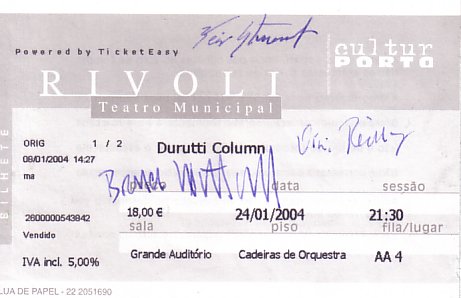 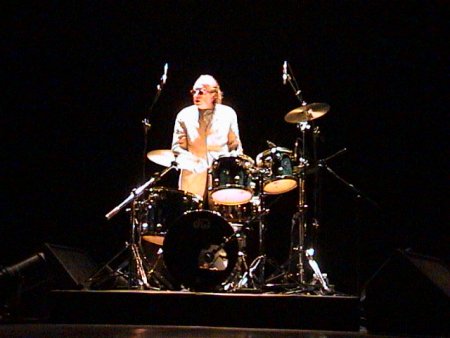 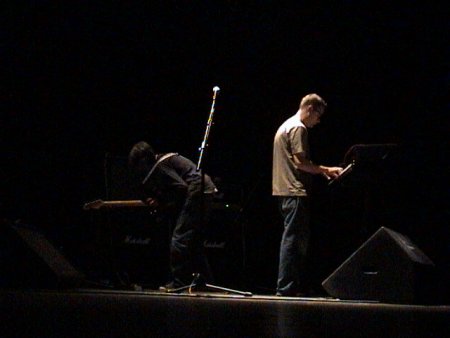 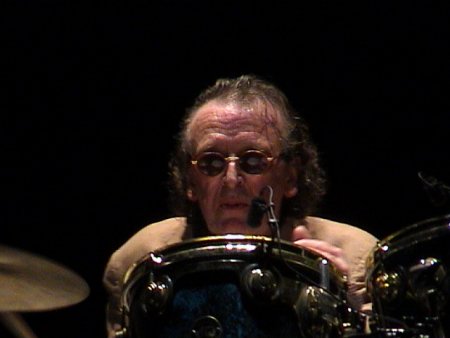 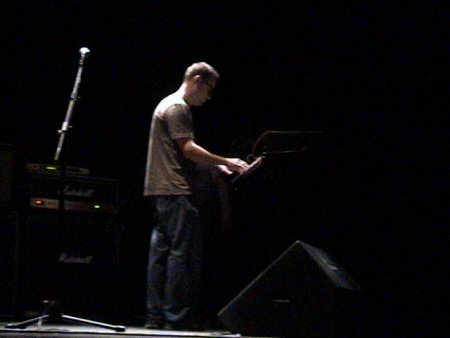 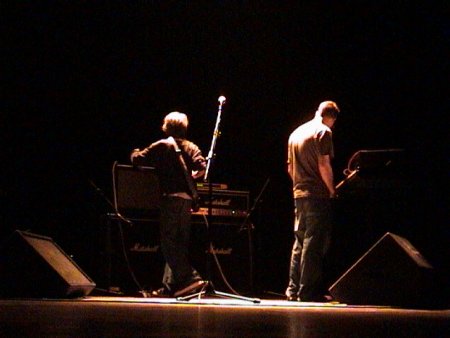 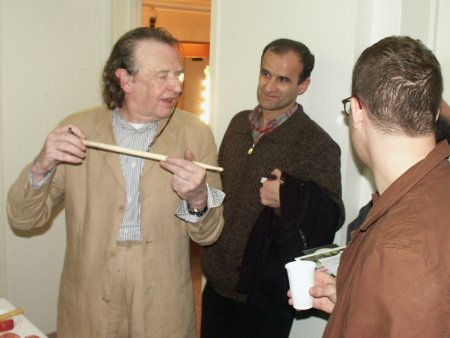 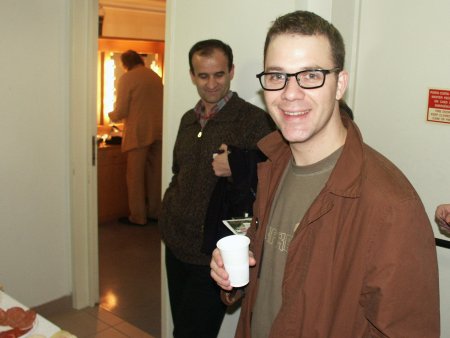 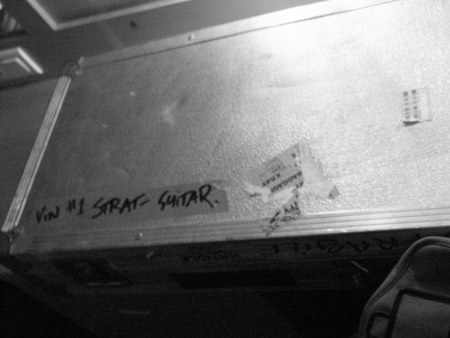 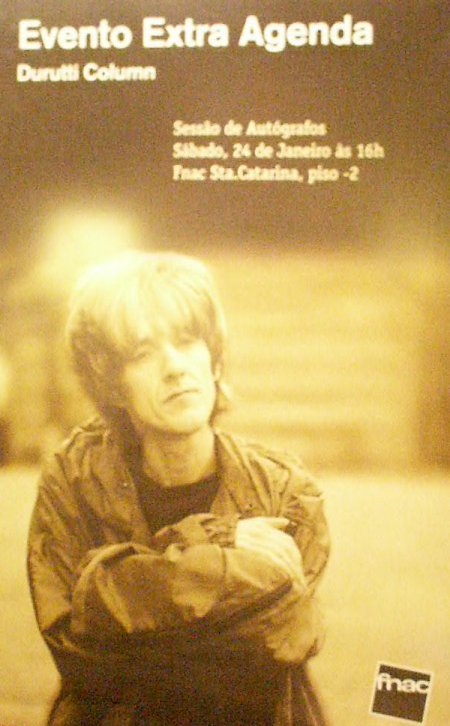 The Durutti Column arrived in Porto hot on the heels of not only the night before's show in Lisbon (Lisboa) but also their unnannounced appearance at the opening of the Peter Saville Show in Manchester on Wednesday. It appears Vini made an afternoon appearance signing autographs at fnac, an electronics, books and music store in the centre of Porto on the Saturday afternoon (before we'd arrived in town). However, I am now the proud owner of the poster advertising said event!

The Teatro Rivoli is a rather splendid-style proscenium stage theatre that has been modernised in recent years. The stalls were pretty full but no tickets had been sold in the circle. The acoustics were helped by adjustable angled baffle boards high up to either side of the front of the stage. Our front row seats afforded us a great view of the large stage on which the typically sparse Durutti Column set-up of Keir Stewart's sampler and keyboard (no Mac), Bruce's hired drumkit on a riser about one foot high and Vini's effects equipment, guitar and keyboard.

After a polite but firm announcement that mobiles should be turned off and no photography was permitted, the band took to the stage, Keir Stewart leafing through a little black book and Vini following suit. After taking the applause, Keir and Bruce returned to the wings to leave Vini to start the concert with a solo guitar piece which I hadn't heard before.

The full band played 'Otis' next, a slightly elongated version with a piano coda played by Vini. 'Never Known' followed though due to Keir Stewart's harmonica refrain it was hard to recognise (thanks Mike). Apparently Keir's new found prowess on said instrument is down to him picking up so many left behind harmonicas that he started to play.

A storming ten minute version (punctuated by several rounds of applause) of Jacqueline, which Vini insisted they never get right. It's interesting to note that this track started off as a two minute track, expanded to five minutes on stage and now has taken on epic proportions.

'Spasmic Fairy' from 'Someone Else's Party' followed again with Keir Stewart on harmonica making it not-so-easily recognisable (thanks to Phil Jones and Mike). This is a very lovely song. This was followed by Woman off the same album and it fast turning into a firm favourite of the live Durutti setlist.

Vini performed 'Harry Dream's The Dream' solo (if you don't count Keir triggering the sample at the beginning. This is one of the songs from the Steppenwolf shows performed in Glasgow and is a soft lullaby.

'The Missing Boy', once restarted due to a technical hitch, was very popular with the audience. But it all really got going with 'Requiem for My Mother'. A long and loud guitar solo by Vini with squalling feedback but probably THE highlight of the set.

They rounded off with The Beggar before returning for 'Revolver' which now begins with THAT Peter Finch sample. Keir Stewart took over Vini's keyboard and the band rocked out. And then they were gone.

This review appears in Portuguese on A Tenda dos Índios: Rockblog here translated into English (thanks Luis!)

"A perfect night - The sound that is on the air"

Almost two years since the DC's last gig in Portugal. This weekend the "Friends" returned to show us their last album "Someone Else's Party". The Santiago Alquimista in Lisbon is probably the best place to receive bands such as the Durutti Column. Welcoming, intimate, charming and nice.

At 22.30, call it British Punctuality, Vini Reilly enters the stage with Bruce Mitchell and Keir Stewart, who during the first theme stay behind the stage with a glass on their hands. Vini was on the floor after his usual words "Hello friends in Portugal" - started to play the guitar with an incredible skill. Twenty years has passed. And this way starter the DC's gig, one more band "daughter" of Manchester e one more product of the Tony Wilson's Factory. Vini and company played to the audience as if we were at a friends dinner. They played themes from "Someone Else's Party" as if they were asking if this new material was good stuff. The audience "answered" yes, because we are friends, right? The room was full, a great environment, a melancholic music and a lot of experimental guitar riffs, this is in few words the resume of Friday's night act. The only major problem was the sound system. It was not at the same level of the British performers. It was clear that the Durutti Column are not a band of "Top of the Tops", they never were. From two decades ago their sound remains in the same melancholic figure and experimental, they are independent and alternative. One hour and a few minutes later, Vini waves goodbye to the audience with "Thanks you friends in Portugal, you were fantastic!" "Friends" of Porto, today it's your turn.

1. New (?) solo guitar piece
2. Otis [with new quiet keyboard ending]
3. Never Known [Keir Stewart on harmonica, sampled voice and Vini sings "sometimes you say, you never know why, you say my name, don't turn away, you say my name, don't turn away" & "this pain is right"??]
4. Jacqueline ["We've been playing this tune for a long time and we still can't play it right. We keep trying and we keep trying but it never quite works." Vini introduced Keir and Bruce and thanks Bruce again at the end of a ten minute version(!)]
5. Spasmic Fairy [Keir Stewart on harmonica - Vini sings "I expected rain, it'll be here tomorrow"]
6. Woman [featuring Keir Stewart on samples]
7. Somebody's Party
8. Harry Dreams The Dream
9. The Missing Boy [aborted at first when Vini complained that his guitar was coming through on his monitor. The offending monitor was turned down and they restarted]
10. Requiem For My Mother [with lengthy and loud guitar solo]
11. The Beggar
- -
12. Revolver [including Peter Finch sample from 'Network']

We would like to say a big, big thank you to Luis and family for getting our tickets in the first place and for all their hospitality whilst we were out there and of course to the band for taking the time to chat after the show. 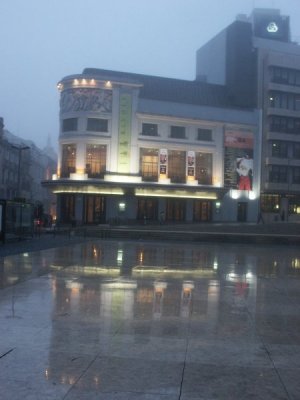 The Durutti Column live at Teatro Rivoli, Porto, Portugal 24 January 2004; exterior of the theatre at night 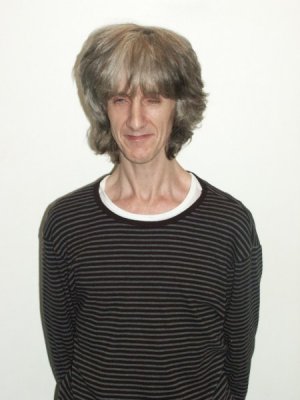 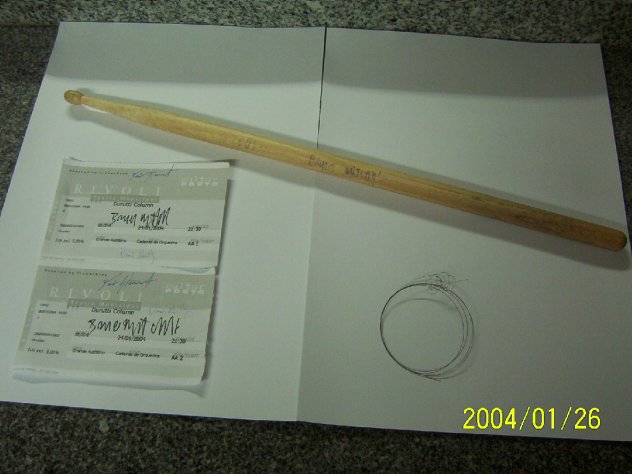 Thanks to Luis Graça for the above photo

Full profile (in Portuguese) of the Teatro Rivoli, Porto at http://www.civilium.net/infocil/rivoli.shtml.

AgendaPorto.pt - a Portuguese information site (with English translation) with a short piece on the gig.