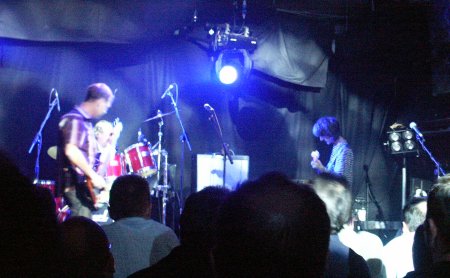 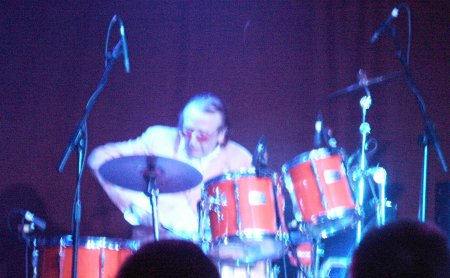 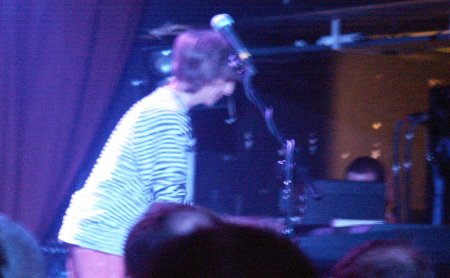 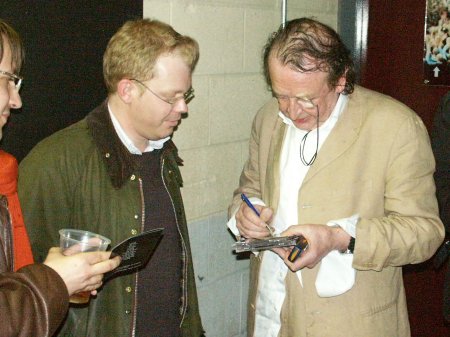 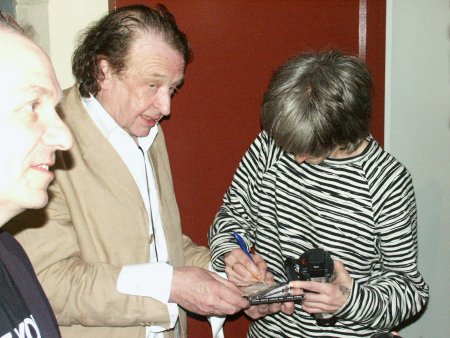 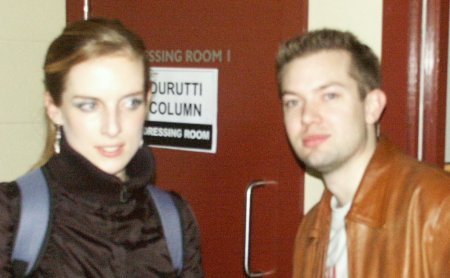 The Durutti Column live at Carling Islington Academy 8 April 2004; half of Litmus backstage

Advert for Carling Academy Islington shows including The Durutti Column on 8 April 2004; half of Litmus

Durutti Column played the Islington Academy, London Thursday 8 April 2004. Support came from Litmus, a string quartet who perform their own unique versions of songs by Mancunian legends such as Joy Division, The Smiths and The Stone Roses. This support slot was been confirmed after the rapturous reception Litmus inspired at their recent gig with Durutti Column at Manchester University.

For Rachel ["incredibly amazing that you've come", "a boring quiet tune"]
Otis [with Keir Stewart on bass and Laurie Laptop]
New track [Shooting from Tempus Fugit?]
Jacqueline
Spasmic Fairy
Woman [now called Guitar-Woman on Tempus Fugit]
Somebody's Party
Voodoo Chile ["the best song ever written", "we haven't rehearsed"]
The Missing Boy
Requiem For My Mother
The Beggar ["their names mean nothing now"]
- -
Revolver ["I want you all to go to your windows and shout out ...."]
- -
Solo instrumental (Albatross) ["a little quiet tune"]

The string quartet Litmus opened with a half hour set during which it was fun to play 'Spot The Tune'. Their versions of 'Blue Monday', 'She's Lost Control', 'Lazyitis' and 'Supersonic' were entertaining. The closest style I can relate them to would be The Michael Nyman Band. An encore was called for but did not come, presumably due to the tight 11pm curfew on the night. The Islington Academy is a strange place it has to be said. There was a fair sized crowd but "where were all the ladies?".

Just after 9pm Vini came on stage to begin the evening and to say thank you to us all for coming. His customary solo number ('For Rachel') was followed by all band members including Laurie Laptop appearing on stage. Bruce Mitchell received the biggest round of applause when introduced by Vini, prompting a quip "How come he got more applause than I did!?". Laurie's presence allowed Keir Stewart to play bass on second track Otis and a number of other songs. Bruce played with more manic fervour than usual perhaps drawing energy from his magnificent luminous drumsticks ("trés chic!"). A new number followed which was possibly 'Shooting' from new album 'Tempus Fugit' which was on sale in the foyer at the Kooky stand (Hi Alex!).

The theme for the evening was certainly 'Heavy'. A great proportion of tracks were 'rock-out' versions led by some incendiary guitar solos from Vini and supported by the drums and bass. This culminated with a cover version of 'Voodoo Chile' by Jimi Hendrix which Vini said was the best song ever written. He also admitted that they hadn't rehearsed it. It certainly rocked.

Afterwards the initial enquiry is there any way to get backstage met with a blunt 'No' from the security. However, step forward Mr Phil Jones the band's manager who saved the day. A small Anglo-French delegation (Hi Alexandre!) made their way down to the changing rooms in scenes reminiscent of This Is Spinal Tap where they're trying to negotiate the Enormodome. It was great to briefly chat with Keir, Bruce, Vini and Litmus. Vini was kind enough to add his autograph to the official (and to my knowledge only) Cerysmatic Factory bag in existence. Thanks guys and see you in Liverpool and (possibly) Shrewsbury.

Thanks to everyone who said hi including the guy who like me was warned for taking photos, Andrew, Kirsten for scribbles, Dan, my sister Sally (a Durutti live virgin) and last but not least Phil Jones.

"And we went home tired but happy"