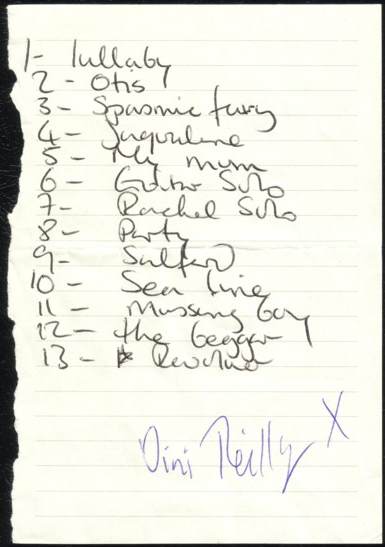 Having extricated ourselves from prior engagements - when it comes to Durutti Column gigs we are quite unscrupulous in clearing our diaries - we set off for Bracknell. We arrived a couple of hours early, but knew we were in the right place when we saw a Salford Van Hire transit at the stage door and Keir Stewart making a call on his mobile nearby. After collecting our tickets (to avoid the rush later on) we skulked around the venue marvelling at the lack of visible publicity.... When the doors opened for the Wilde Theatre there was no queue, no touts, just a trickle of likely and unlikely ticket holders ambling towards the stalls entrance. The venue staff informed us that seating was now unreserved and the balconies would not be accessible, we'd all have to squeeze into the stalls. Rows A - D had been removed as the stage had been extended forward of the proscenium arch leaving perhaps 100 seats in the stalls, this seemed to be causing concern in some quarters as to whether Vini might have an 'artistic' episode and cancel - to be honest I preferred the venue to Ronnie Scott's, much more of an intimate atmosphere, perhaps even more so than the Jazz Café. We were quite surprised that the walk-in music was a Durutti Column tracks, but not recognizably all from one album. Vini came on stage once to fiddle with something on his amp rack, then without looking off stage disappeared again. Five minutes later he returned accompanied by Bruce Mitchell and began the show by saying "we'll start very quietly and get very loud". With a little shiver of deja vu from the Jazz Café I sat back, relaxed and enjoyed the performance. Everyone was definitely firing on all cylinders and Bruce Mitchell put in a particularly fine solo. The first encore involved Vini, Bruce Mitchell, Keir Stewart and Laurie Laptop, who Vini finally introduced proclaiming that he had no idea what it is that they do. It was indeed "very loud", so loud that halfway in Keir signalled the Engineer to turn him up - the second encore was Vini alone with a guitar tune that I found reminiscent of Fleetwood Mac's 'Albatross', and took us back to very quiet. 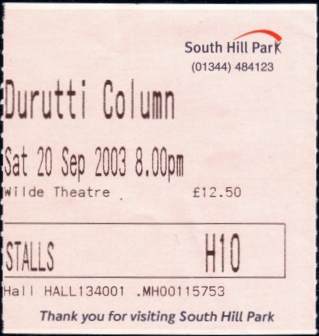 At the close I leapt to my feet and approached the Sound Engineer to ask for his copy of the set list figuring that it'd be the ideal gig to try what with the lack of people to get past. He didn't have one but offered to ask backstage, so I suggested that a signed one would be even better. To my great surprise and pleasure he reappeared a couple of minutes later with Vini's set list, signed. With a lot of thanks to the sound guy we disappeared into the night...

Thanks very much to Dan Hall for his account and the scans of the setlist and his ticket. Additional thanks to Andrew James (again!).