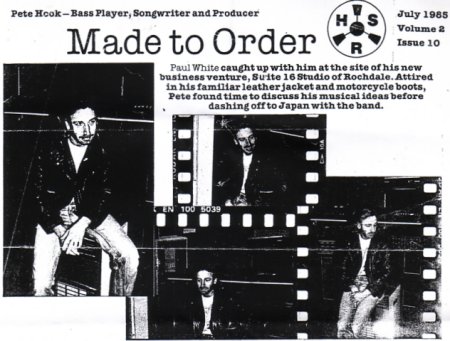 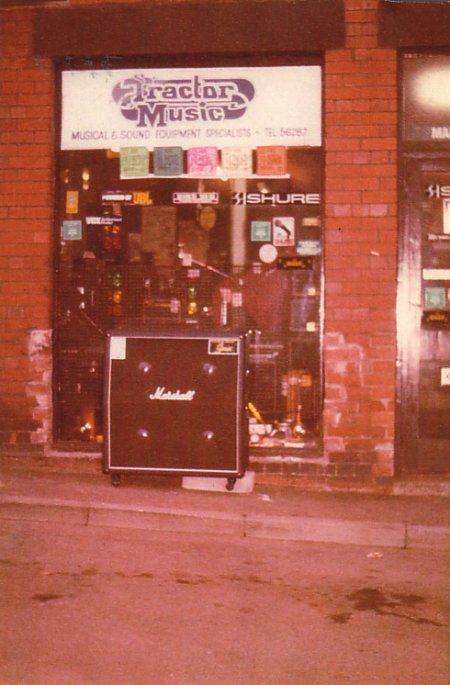 The following interview with Peter Hook is from Volume 2 Issue 10 (July 1985) of Home Studio and Recording magazine.

Paul White caught up with him at the site of his new business venture, Suite 16 Studio of Rochdale. Attired in his familiar leather jacket and motorcycle boots, Pete found time to discuss his musical ideas before dashing off to Japan with the band.

There are are lots of jokes about Rochdale on a wet Sunday afternoon, but it was in such weather conditions and in that very town that I met up with Pete Hook on Sunday in April.

Known for his work as bass player with Joy Division and New Order, Pete Hook at the age of 29 remains justifiably cynical towards the music industry. Not that he doesn't take music seriously, he does - but he doesn't have time for the hype, music. Joy Division, later to evolve into New Order were borne of the new wave that spawned punk and their unique blend of raw, intense, some say doomy music inspires a new reverence in their followers. Their close working relationship with Factory Records has resulted in the band enjoying success in the independent market where they have established themselves as a cult-band, particularly since the success of their hit single 'Blue Monday'. Their music has almost subversive connotations, combining raw playing with electronic synthesis, and the band are not slow to turn the, new technology to their advantage.

Suite 16, is jointly owned by Pete Hook and Chris Hewitt, who incidentally manages the adjoining Tractor Music retail shop, and their new studio occupies the same premises as the now defunct Cargo Studio. Much of Cargo's studio equipment was inherited by Suite 16 and this includes a 16-track Cadey Valve multitrack machine which is still in use, although it is shortly due to be replaced by a new SML 16-track machine. The Cadey has been somewhat unreliable of late and has had to be nursed through recent sessions.

The staff are looking forward to getting the new machine as it offers the option of recording at 30 ips without the necessity of noise reduction. Pete understandibly is wary of noise reduction systems and avoids using them whenever possible.

I asked him about is views on production and was not at all surprised when he expressed a preference for working with earthy, raw sounding bands. This does not however mean that producing such bands is always a straightforward job; indeed the lengths that he goes to recreate his own distintive bass sound in the studio are as extreme as any I've come across in any field of music.

Most engineers advocate a mixture of DI and mike signals to produce a satisfactory bass sound, but Pete takes this further when it comes to recreating his own sound - much further.

The DI'd part of the signal is treated using MXR pitch transposer and the old Electro Harmonix Clone Theory chorus pedal to thicken it up. This in itself causes problems, as the Clone pedal tends to be somewhat noisy but Pete has been unable to find a suitable low-noise replacement that still gives the same hard-hitting effect. If it come to a choice between compromising the sound or putting up with a bit more noise, he'll opt for the noise. In addition to the to the DI'd signal, there are one or two bass amplification systems incorportationg Gauss 15 inch drivers which are miked up, usually with Shure SM 57s, and a little digital delay is used to create ADT or tunnel echo effects which are part of Pete's distinctive bass sound. Occasionally a Leslie Cabinet is also hooked in the system and miked up, and ambience is added by feeding a mix of the bass sound into a live room lacated bellow the studio via a Dynacord PA System and miking up the result. Compressiona is added both pre and post FX where needed.

New Order us drum machines extensively, but Pete is also capable of extracting the best from an acoustic drum kit. Up to three mics may be used on the snare drum alone to obtain the required effect, and the ambience is then added by using the live room or a choice of reverb units. The ambience is then gated using Drawmer of Rebis noise gates if a really drum sound is appropriate.

Suite 16 at the moment has a Stocktronics plate reverberator is on order and its arrival eagerly awaited.

Pete goes for a guitar sound that's fairly up-front and cutting, and therefore tends not to use chorus devices very much as these produce a smoother and more recessed sound. Excessive use of ambiience is also avoided for the same reason but a Rockman is sometimes brought into play where its sound fits the track. As with the bess, a combination of DI and mike signals is used to produce the final result and Pete's approach is to experiment and he does not avioce flouting convention if that's necessary in order to produce the sound your after.

Vocals are generally recorded dry though some effects such as reverb may be fed into the monitor mix to ut the vocalist at their ease. The MXR Pitch Transposer is used to produce slight detuning of the vocal sound and reverb is added as required. An Aphex Compellor inherited from the New Order effects rack may be used to control the vocal level if a very subtle, unobtrusive compression is felt to be appropriate but there is also a choice of a Gemini Easy Rider and a pair of Trident compressor/limiters.

If the vocalist dislikes using headphones, as a generally the case when recording New Order, the backing track may be monitored over the control room speakers and then phase cancelllation is emplyed to minimise unwanted pick-up. 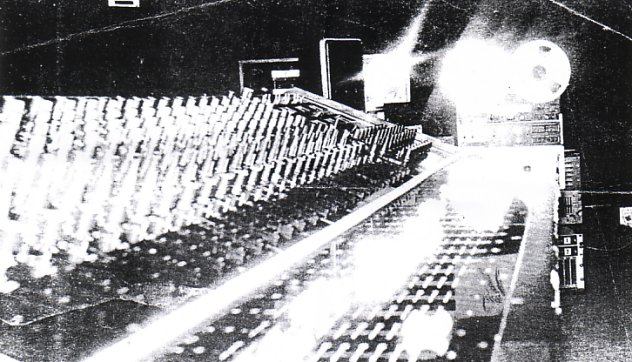 Pete prefers the sound of the JBL monitors bought from Cargo, but he does concede that the top end os deceptive and can lead to recordings that sound dull when played back over other systems. The Tannoy speaksers which form part of the alternative monitoring system give a more accurate if less flattering sound picture and a pair of Auratones are used for new field monitoring - though a pair of American ROR Speakres are ion order to replace these. The concensus is that the Auratones overemphasise the voals and unless this is compensated for, the final mix can end up with an unduly recessed vocal sound.

Just because New Order use drum machines and sequencers, it doesn't mean that they have to be used conventionally to produce standard electronic pop music (whatever it is). Pete however realises the potential of the new technology and now used an RX11 drum machine in conjunction with a QX1 sequencer whic can be synced to tape, though previously an MC202 and TR808 were used. To Pete's mind, the RX15 is a bit lacking in the memory department but the QX1 can store the rhythm patterns via it's disk drive which neatly aviods that limitation. Once criticism is that the manual for the QX1 is very badly written, making it a nuisance to program.

The studio itself has two Oberheim DMX drum machines with few extra voice cards including a particularly good bass drum and congas. Additional percussion sounds are samples using the Elctro Harmonix Instant Replay or DDls such as the excellent Bel system which are hired in when this sophistication is required but the aquisition of a new Emulator II has opened up new horizons in this department. A Simmons SDS5 and more recently an SDS7 have been aquired but the SDS7 has had to be returned after extensive teething troubles.

The Emulator II has given a variety of problems since its recent purchase, but Pete believes that when these are ironed out, the machine will be extremely useful. It can be played manually or from the QX1 via MIDI and the looping facility is very effective, being the key to high quality glitch-free sustained sampled sounds - though Pete intends to take are not to fall into the trap of producing cliched effects that have already been overused. So far, several off-the-wall samples have been created including the sound of crunching corn-flakes, which have been added to gated ambience treatments.

As previously intimated, Pete is keen on a rough, raw sound; probably his way of rebelling against the musical establishment, but that doesn't mean that he used no production tricks. Effects are sometimes recorded onto tape, (onto a spare track whenever feasable), so that options can be kept open for as long as possible. Other effects and treatments are added during the final mix and Pete has been experimenting with the technique of panning all the sounds to the centre whilst panning all the effects to the sides. Though he hasn't done any 'real' mixes this way, he is enthusiastic about the results and after futher experimientation and refinement, I'm sure that it will find an application. Pete listens to and draws inspiration from most types of music but hates Jazz!

For further experimentation, Pete has a Portastudio at home, with which he is very pleased, and the bands' rehearsal rooms are equipped with a Teac 3440 and a TAC Mixer because, as the songs nearly all evolved from jam sessions, these must be captured for analysis and further structuring.

New Order have a new album titles 'Lowlife' which is due for imminent release and the new single 'Perfect Kiss' should also be in the shops soon.

The band are currently starting a tour of Japan which will include some recording sessions but when Pete gets home, he will undoubtedly have a backlog of production work to get stuck into.

All images and text by kind permission of www.deeplyvale.com. Many thanks to Chris Hewitt.