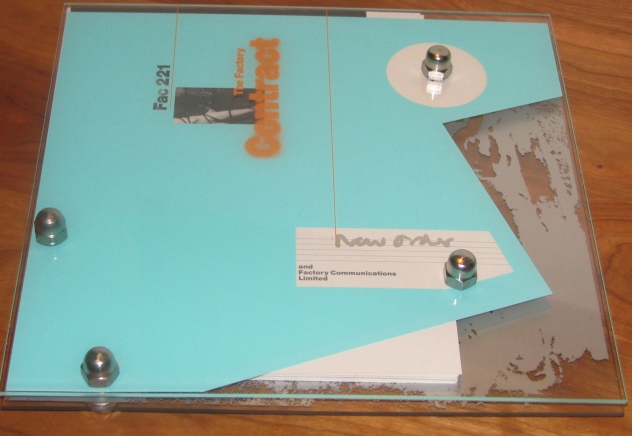 Factory forgot (again) about having allocated this number already (to the Factory Goes To Hollywood badge), and allocated the number to their 8vo-designed contract binders from mid-1990. Factory never originally had formal contracts with its artists but eventually decided that it might not be a bad idead. The contracts were issued to selected artists, starting with Cath Carroll (who allegedly signed an 8-LP deal). Two 12"x12" clear perspex plates with screenprinted signal green, silver and signal orange design, held with 4 metal bolts. The bolt positions are located to hold A4 sheets in place and allow for a variable number of pages. Number of pages varies from contract to contract. However, 8vo didn't do the A4 contracts layout/design. According to Mark Holt at 8vo only 2 dozen or so were manufactured.

This example shows the band name New Order handwritten on the front cover. According to Mark Holt this was their suggested style of indicating for whom the contract was written. The white paper inside the binder in the photo is just blank sheets for illustrative purposes.

Thanks to Mike Stein for photography and info.