Designers > 8vo > Grafik magazine #133 - 'Narrative on Narrative' article by Hamish Muir < 8vo: On the outside < Books 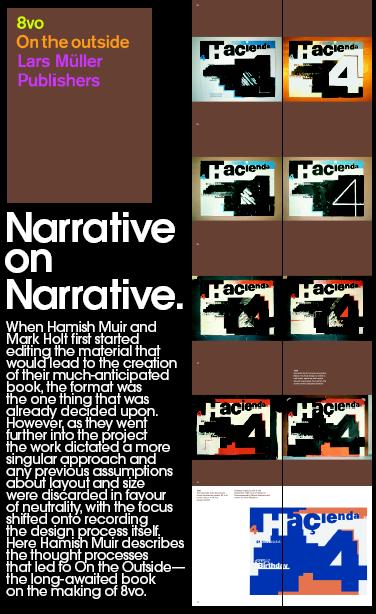 The October 2005 issue of Grafik magazine (#133) featured an article by Hamish Muir on the 8vo book 'On the outside'. This was to coincide with the book's publication in late October / early November.

Extract from the introduction: "When Hamish Muir and Mark Holt first started editing the material that would lead to the creation of their much-anticipated book, the format was the one thing that was already decided upon. However, as they went further into the project the work dictated a more singular approach and any previous assumptions about layout and size were discarded in favour of neutrality, with the focus shifted onto recording the design process itself."

Extract from the article: "After closing 8vo in 2001, the idea of producing a book about 8vo and Octavo was first discussed seriously by Mark and me some twelve months later. We approached Lars Müller, who said he'd be interested in publishing the book. We wanted to assess what we had done, to offer some explanation and to put the past behind us so that we could move on from being ex-8voers."

Thanks to Hamish Muir.