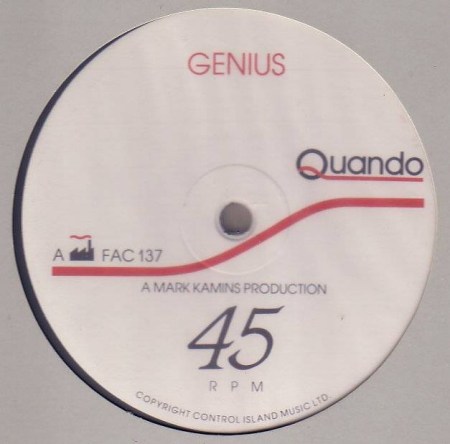 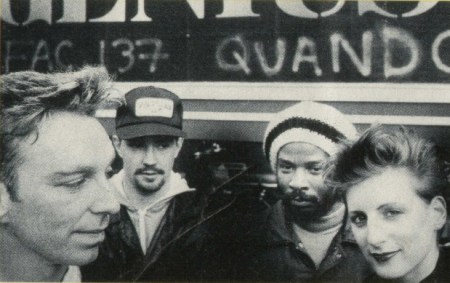 The short-lived UK pop magazine The Hit (19 Oct 1985. #6. Page 2) featured a piece on the "advertising programme" for this release by Quando Quango.

"The Hit's Single of the Week stars are Quando Quango - see review page 28 - but they came close to celebrating it in the nick. The Manchester band fell foul of the long arm of the law last week when they tried to customise a Guinness poster for their own promotional purposes. Well, the single IS called 'Genius'. Photographer Kevin Cummins was just recording their artistry when this camera-hogging copper loomed in front of his lens. Quango man Mike Pickering needed all the genius at his disposal to avoid arrest by convincing the constabulary he was actually covering up the offending scrawl."

The photographer on the day, Kevin Cummins, recalls how events unfolded: "Guinness started using Genius / Pure genius in their ad campaign around the same time as the QQ track. I asked Mike if he'd like to er customise the poster do it as I thought the graffiti on the billboard would make a good shot - and I thought we could also do a quick band shot against it. Someone must have 'grassed us up' because the police were there pretty sharpish. We explained what we were doing and they didn't really know what to do. Initially they were going to arrest us for defacing the poster - but eventually they decided it'd be ok if we bought some black paint to cover it all up. I let Mike do all the labouring..."

Quando Quango's Gonnie Rietveld looks back fondly: "What an eclectic bunch of people! Looking at that picture brings it home to me how each of us was so differently unique. It's a magical fluke we ever worked together. No wonder the album (and even 'Genius' itself) was excitingly eclectic; it was right to appropriate an ad for a photograph to market that track."

Furthermore, as it says above, 'Genius' was made Single of the Week. Here is the review by Ro Newton: "From the Mancunian band who brought us 'Atom Rock'. 'Genius' is piano bar music with a difference. Smooth and elegant, it drifts along hanging on a supreme hook line but then suddenly breaks into wild percussion and a mass of abstract sound. Almost vocal-less except for the occasional distorted chant, this song weaves a spell which entices and captures you unawares - like a pleasant dream which turns into a nightmare. A stroke of genius. - Ro Newton, The Hit."

Many thanks to Kevin Cummins and Gonnie Rietveld. 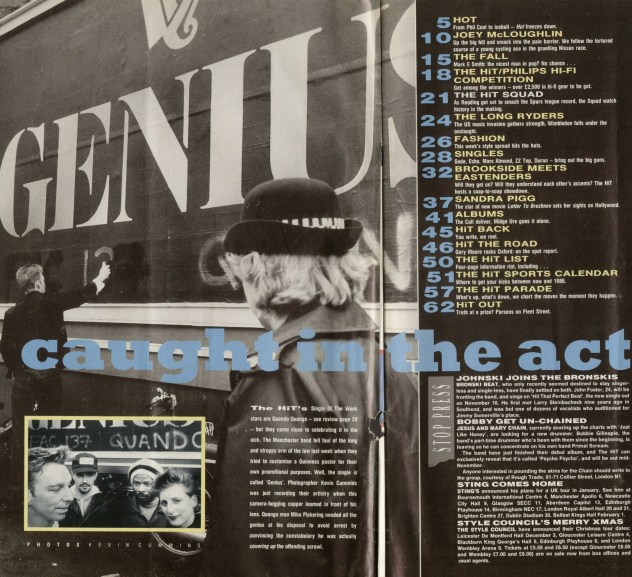