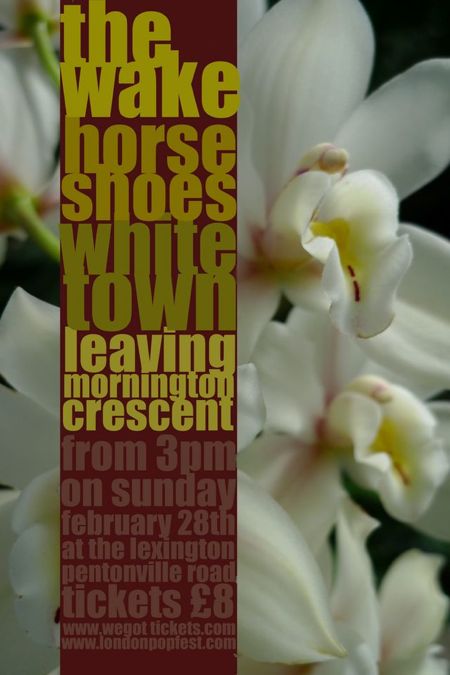 The Wake played the final day of the four-day London Popfest 2010 at The Lexington, Islington, London on Sunday 28 February 2010.

The Wake broke a long live silence with a stunning set at A Factory Night (And then again) at Plan K in Brussels.

Second-on-the-bill Horse Shoes feature a member of The Drums. Both The Drums and Horse Shoes cite The Wake as a major influence.

This was an early show with the doors opening at 3pm.

An early start last Sunday saw hundreds of indie pop kids descend on Islington for London Popfest 2010 featuring headliners The Wake making only their second live appearance in nigh on 20 years. Some slightly older IPKs made their way to The Lexington via a pleasant diversion in one of London's finest hostelries, The Wenlock Arms (where a rather apt Wake Ale pumpclip was spotted atop the bar).

Horse Shoes, comprising one guy out of The Drums, a guitarist and a backing tape were the third band on and the first one we caught. The tunes were catchy enough and they had a certain stage presence but what was going on with those guitar solos!?

The Wake headlined the afternoon session and came on stage to a dreamy backing tape. The performance was as tight as it had been in Brussels contained something Factory- and Sarah-era Wakeheads alike. Thanks to David Cooper for making a good first stab at the setlist.

Afterwards, Caesar revealed that more dates are in the pipeline with Paris and NYC in May being first up. More details when we have them.

It was good to see Paul, Emita, Mark, Iain and David. Let's do it again next weekend in Brighton for ACR.