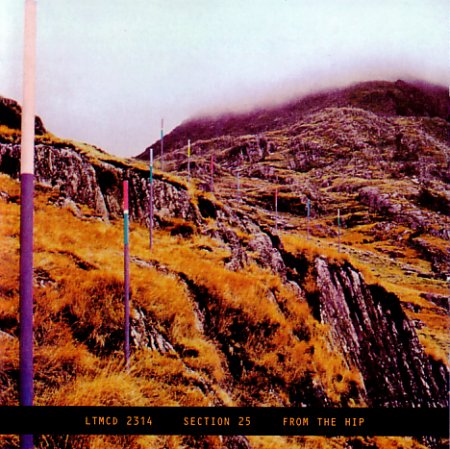 "New deluxe digital remaster of classic 1984 vintage electronica produced by Bernard Sumner of New Order, including both 12? remixes of the durable US club hit Looking From a Hilltop (FAC 108), together with previously unreleased 12? mixes of Beating Heart and Back to Wonder (FAC 68). Also features two mixes of Dirty Disco II. 74 minutes, 15 tracks. Original Peter Saville artwork."

"It sounds resolutely modern even now, like the precursor of House and Techno. From the Hip is the group's masterpiece" (The Wire, 6/02); "Lovingly repackaged? Unveils the band as a spiked synthetic pop unit of considerable merit" (Melody Maker, 1/1992); "Interesting forays into ambient textures and also an instant club classic in Hilltop" (Record Collector, 11/98); "Beautifully pale and wan" (Q Magazine, 8/1999); "This is the gleaming, future-dwelling SXXV" (Uncut Magazine, 8/00)

PRODUCED BY BE MUSIC AND SECTION 25 EXCEPT 9-11 INCLUSIVE BY BE MUSIC + DOJO. FULL SLEEVENOTES AND RECORDING DETAILS IN BOOKLET. THE COPYRIGHT IN THESE SOUND RECORDINGS IS OWNED BY SECTION 25. AN LTM COMPACT DISC. 1998 DIGITAL REMASTER. MADE IN ENGLAND

The brainchild of brothers Larry and Vin Cassidy, Section 25 were one of Factory's post-punk babies eclipsed by New Order.

Always Now (1981) was their most complete statement. The mood was dim and oppressive, the beats, melodies and the vocals several complementary shades of gloomy (their name came via a clause in the 1959 Mental Health Act), as the album crept from one funereal peak to another.

The Key Of Dreams (1982) made more monochromatic noises but was earmarked by an expansive tension as a result of improvised sessions that separated the ambient and minimalist Kraftwerkian elements of their music.

Without breaking through, and with new vocalist Jenny Ross, From The Hip (1984) was a real U-turn. Produced by New Order's Bernard Sumner, its bright electro-pop colours vied for commercial approval with bouncy sequencer pulses, the best of which drove View From A Hilltop (sic) [really Looking from a Hilltop].

LTMCD 2314 SECTION 25 FROM THE HIP. The classic second Factory album. Available to buy now from LTM.