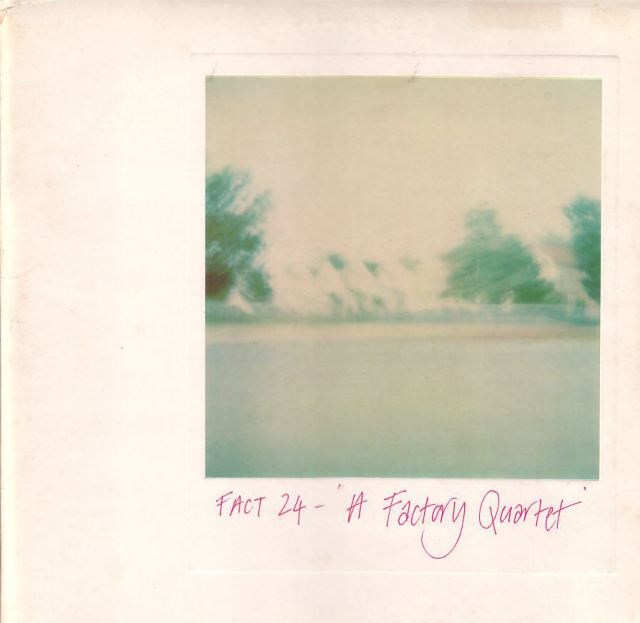 [Cerysmatic Factory] What was the overall philosophy of the album and why were those four artists chosen?

[Kevin Hewick] Durutti Column gave a connection to the original Factory sampler I suppose and to entice people to buy it to hear the other 3 unknown acts. I felt an affinity with Vini but not with Blurt or The Royal Family, I never got to know them much or work with them again. Critically, the Quartet wasn't well received - even Vini's side as I recall but I destroyed my old reviews while in a deep depression years later - maybe you'll find different, but, as I recall there was generally a disappointed reaction compared to the Factory Sampler EPs. I got 100% panned - even in "Smash Hits"!! 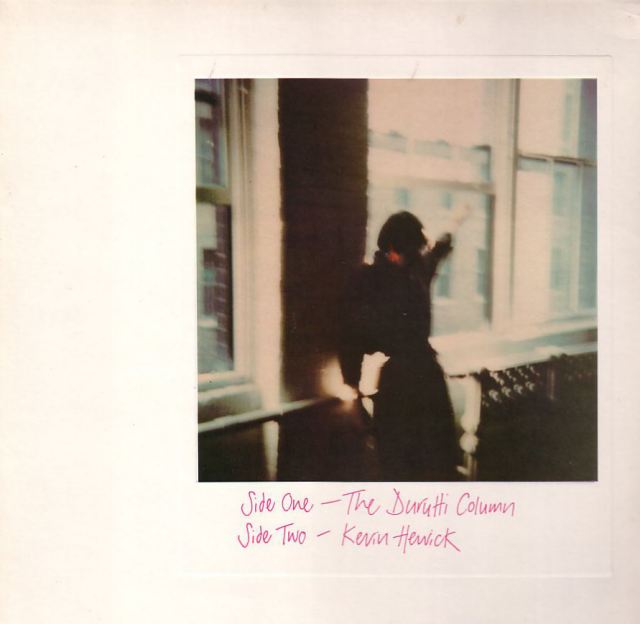 FACT 24 A Factory Quartet; inner sleeve detail [1]; Side One - The Durutti Column; Side Two - Kevin Hewick

[CF] Is there a significance to the run-out groove messages?

[KH] You'd have to ask the others what theirs mean. Mine was "Yip! Yip! Yip!" which was the sound the creatures that were my logo made. They were called Funny Animals, looked like giant mice, wore silver cloaks and lived on clouds. I "discovered" them in 1973 and they became very famous at my school. They have now retired but may come back soon to supervise various future projects. They became Funny Animal Leisurewear in association with Frail Specifics.

[CF] Was there any of the razzmatazz that accompanies records released these days?

[KH] No advertising, nothing like that. No launch party, nothing. The press release came out about a year before the Quartet and is a crudely typed side of A4. I think it marked the end of the wave of goodwill from the press following Ian Curtis's death. Factory didn't walk on water so much after the Quartet. 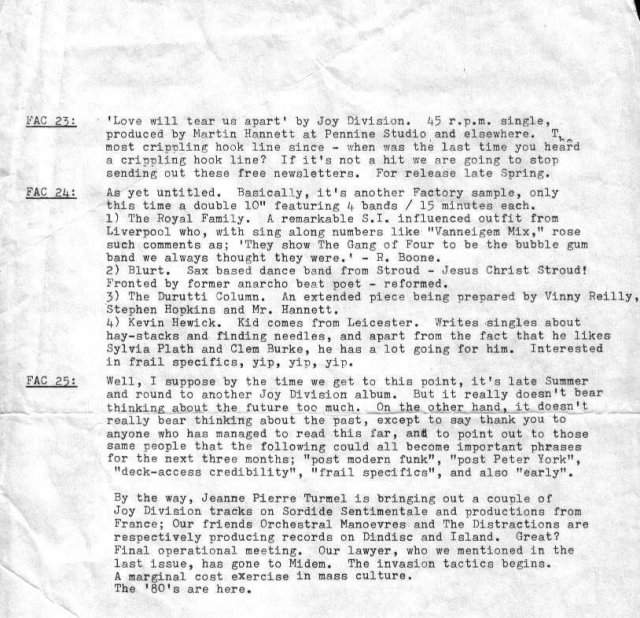 As yet untitled. Basically, it's another Factory sample, only this time a double 10" featuring 4 bands / 15 minutes each.
1) The Royal Family. A remarkable S.I. influenced outfit from Liverpool who, with sing along numbers like "Vanneigem Mix," rose such comments as; 'They show The Gang of Four to be the bubble gum band we always thought they were.' - R. Boone.
2) Blurt. Sax based dance band from Stroud - Jesus Christ Stroud! Fronted by former anarcho beat poet - reformed.
3) The Durutti Column. An extended piece being prepared by Vinny Reilly, Stephen Hopkins and Mr. Hannett.
4) Kevin Hewick. Kid comes from Leicester. Writes singles about hay-stacks and finding needles, and apart from the FACT that he likes Sylvia Plath and Clem Burke, he has a lot going for him. Interested in frail specifics, yip, yip, yip. 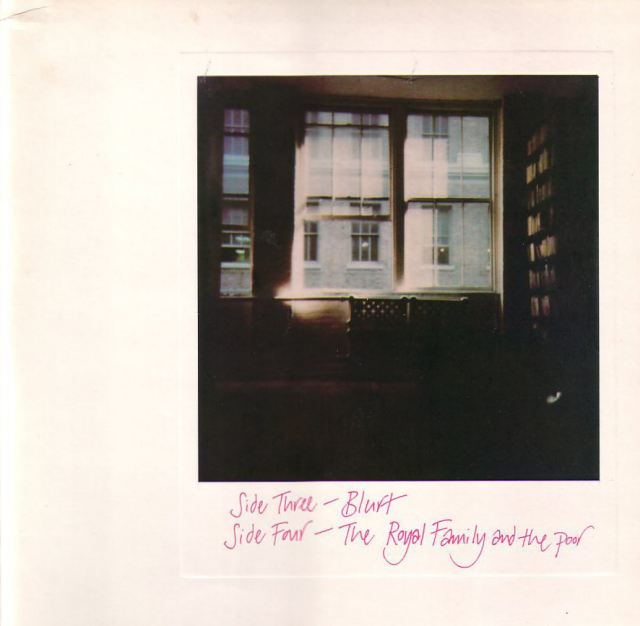 FACT 24 A Factory Quartet; inner sleeve detail [2]; Side Three - Blurt; Side Four - The Royal Family and the Poor 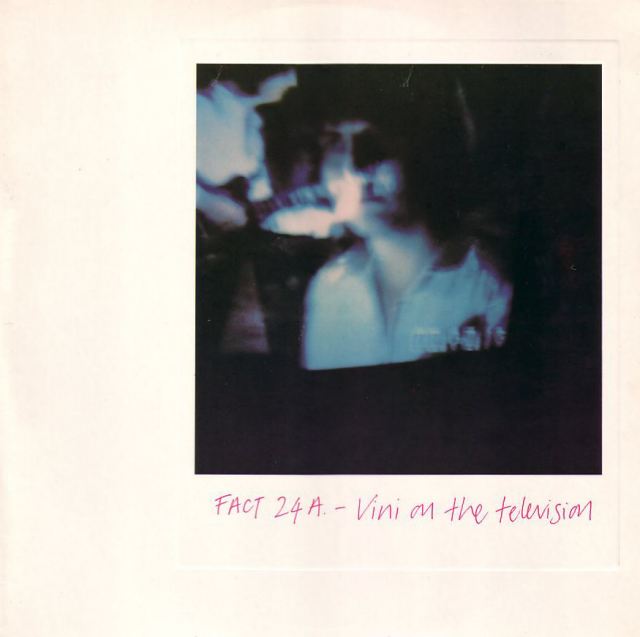 FACT 24 A Factory Quartet; side A inner sleeve detail; Side One - The Durutti Column; FACT 24A - Vini on the television 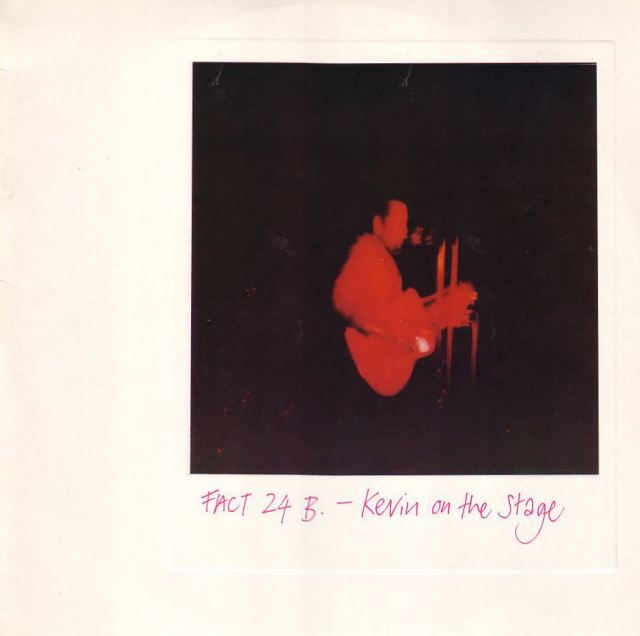 FACT 24 A Factory Quartet; side B innner sleeve detail; Side Two - Kevin Hewick; FACT 24B - Kevin on the stage

Originally I did a session at Graveyard studios in June 1980 to do 5 songs for the Quartet but I didn't get that many songs down. I'd never been in a proper recording studio before, I was already nervous but to add to that Tony Wilson had rung me the night before to say the three surviving members of Joy Division (Ian had died a month before) wanted to do the session with me! We did get two songs down, one of which "Haystack" ended appearing on the "From Brussels with love" cassette. My nerve's really got the better of me on my solo stuff, I didn't get through a single complete take. After that Tony asked about the live tapes I'd got - I'd been very keen on getting cassettes done off mixing desks where possible and had reel to reels of five out of my six Roy Harper supports in May '80 - Glyn Wood and Dave Pringle, Roy's crew,had been happy to slip my blank reels on before taping Harper's main spot.

On the other end of the scale if nothing else were possible I'd do mono recordings on my little portable recorder - I always taped any gigs - still do, only on mini-disc these days!

My BIG mistake was letting Tony have every good SOUND quality tape that had been done of me thus far - that didn't mean the actual performance was always any good, just the sound quality!

I carefully labelled the best versions of of particular songs - but Tony ignored that. He claimed to me that the first reel he put on was Leeds University - and he thought he'd go with that - which just happened to feature a VERY hostile audience reaction.

The show that night ran late because two of Roy's band, guitarist Andy Roberts and drummer Preston Hayman, hadn't turned up after a two day break on Andy's boat! Roy's manager even considered dropping my set - which is what should have happened. Roy should have gone on solo.... but in the end I did go on. Soundman Woods had been so obliging he even played my intro tape, Sylvia Plath reading her poems "Lady Lazarus" and "Fever 103" - bad move!

Sylvia Plath reading her poetry as an entrance tape for a support act nobody in the audience wanted anyway at a show already running about 90 minutes late. Sometimes you dig your own hole yes?!

I had about 1,000 people baying for my blood. 23 years on it still haunts me - and if I'd have known it would end up on a live album!!!! So the Quartet side comes in when I snap after 20 minutes of howling abuse - and snap I do.

I don't blame them, they had buses / trains to catch ... or were just plain fed up of waiting for Harper. I'd only started gigging three months before, this was only the 7th I'd done outside of school concerts years before. I really couldn't handle it and I provoked an even worse reaction. I said some really daft things - the bit about the meeting of the Gay society at 6 was actually true, there had been! I had typical macho males shouting at me, it was just a dumb dig at them not at anyone who was gay and the bit about Roy Harper being on later - "maybe you deserve each other". Well that couldn't be further from the truth. I already was, and remain a great fan of Roy's work, he's a huge influence on me to this day.

Well, I got out alive... just. I had to go through the crowd to get paid after - I literally walked through a gauntlet of insults. I remember one girl wending her way through the crowd toward me just say "I THOUGHT YOU WERE CRAP!" right in my face and with that walking away again. I demanded cash not a cheque - the student ents guy virtually threw the money at me - it was a long drive home that night.

A happier occassion was five weeks earlier at The Moonlight Club in London, my first ever show in the capital. The other tracks on the Quartet were taken from a cassette recorded from the mixing desk. Well it sounds very raw and messy now but I got a good reaction, had friends in the crowd including Jackie Leven of Doll by Doll who did a one man stage invasion to announce on the mike "You'll remember this in the morning you bastards! "straight after "Haystack" - Tony edited that off to my regret.

It was the same night that Joy Division did "Sister Ray" on "Still" but I missed it, going back to Maida Vale to Doll by Dolls squat to celebrate my, er, triumph? I always thought there'd be other times, I'd seen them 3 times already.. how was I to know..! Mark Ellen gave Blurt and I a better review than Joy Division in NME in his review of the show! I thought I was well on my way.. ha! Peter of ACR did the noise before "Morphia" crouched down at some oscillater thing, one of Tony's little ideas. It was also at the Moonlight Club, but later that year in July, that I first met Vini Reilly, then the lone Durutti Columner, just him, a guitar and a tape recorder - absolute magic. We got on very well and were to do about a dozen shows together, including trips to Scotland and Finland. 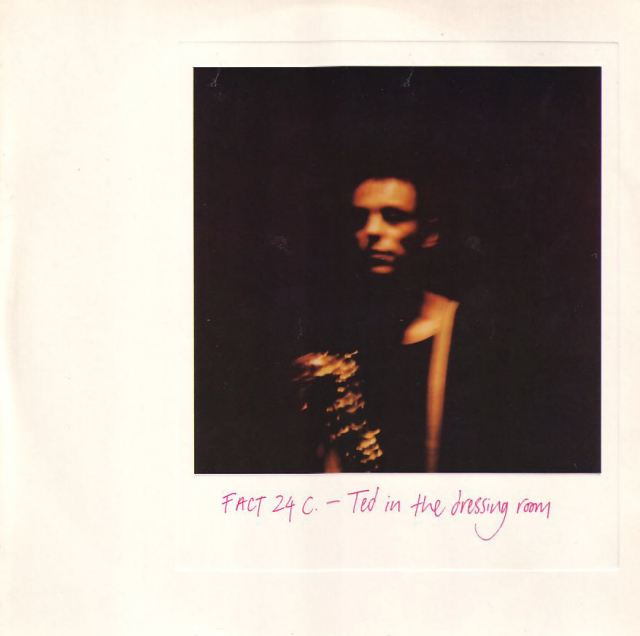 I first saw Ted Milton supporting Ian Dury and The Blockheads in 1978. He did this awful punk performance art Punch and Judy puppet show, puerile stuff like one of the puppets drinking snot from the others nose! Jake Milton was, briefly, drummer in a band with none other than Eric Clapton!

The Milton brothers shared a flat in Covent Garden with Eric in the mid-Sixties. Tiring of his heavy UK touring schedule with John Mayalls Bluesbreakers Eric took off with Jake and several others in August 1965 in a bus across Europe to Greece where they did one shambolic gig as The Glands(!) Their idea had been to go on to wherever in the bus doing as they pleased but it all fell apart and EC returned to Mayall.

I'm not clear how but The Miltons had some connection to Blackhill enterprises who managed the likes of Pink Floyd in the 70's - maybe that's how Blurt got on Blackhill act Roy Harper's tour in 1980? I was meant to do 3 shows on that tour too but Blurt got dropped and I did 3 more in their place. Their Quartet side is very much what they were like live but - and this affected me too - it used up half an album's worth of their material, a big chunk of their stage show.

Following his brief adventure with Eric Clapton Jake Milton joined Quintessense - true hippy dippy Krishna types who had several albums out on Island and RCA, quite popular around 69/70. They were known by first names only like Alan on guitar / Jake on drums. They actually had a single out called "Notting Hill Gate" with such lyrics as: "THINGS LOOK GREAT IN NOTTING HILL GATE/THEY ALL SIT AROUND AND MEDITATE.." - I kid you not!(Alan had a rather far out guitar instrumental called "St Pancras" too!) The Quints were much loved by my mums younger brother Joe who was only 6 years older than me, a bit like the older brother I never had (I'm an only child) so I heard a lot of them at the time!. I remember asking Jake about it and he seemed proud of his past so good for him. 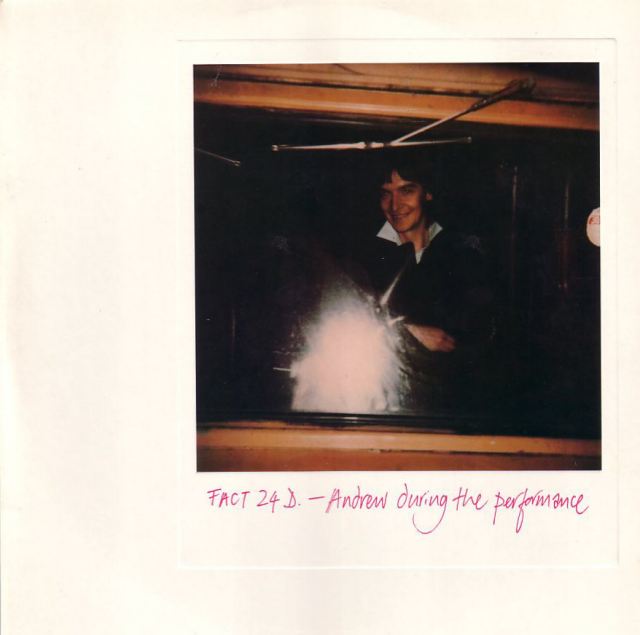 FACT 24 A Factory Quartet; side D inner sleeve detail; Side Four - The Royal Family and the Poor; FACT 24D - Andrew during the performance 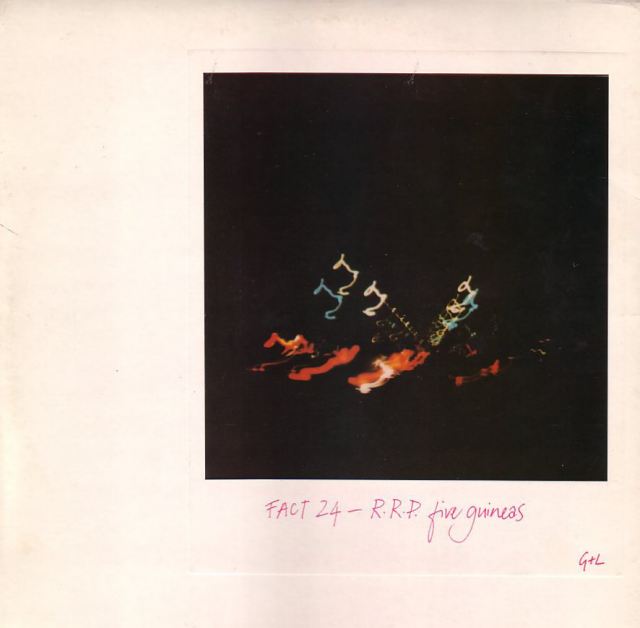 Extra special thanks to Kevin Hewick for his kind help with this page. Yip Yip Yip!