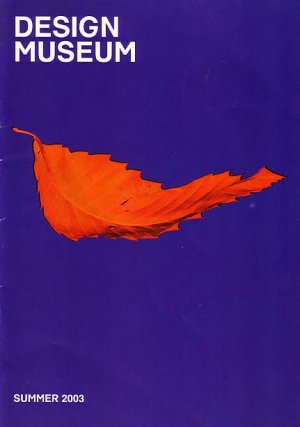 Every Fac-fantasist's dream come true! A first retrospective of Saville's work for Factory Records and others. The book, 'Designed by Peter Saville', comes out at the same time.

From the Design Museum official website: "One of the most influential designers working today, Peter Saville has been a cult figure in both graphic design and pop culture for 25 years since the start of his long collaboration with the bands Joy Division and New Order as art director of Factory Records, the legendary independent record label. He has also created iconic fashion images in his work for Yohji Yamamoto, Christian Dior and, now, Stella McCartney and Givenchy. This first retrospective of Peter Saville's work, drawn from his private archive, will trace his career from Factory Records to his recent multimedia projects while tracing the history of contemporary graphic design and the story of how style culture hit the High Street."

A day before the launch party, Alice Rawsthorn the director of the Design Museum, was interviewed by Robert Elms on his BBC London radio show. Their conversation centred around The Peter Saville Show and yielded a few hitherto unknown gems.

Peter Saville first met Tony Wilson on the latter's seminal music show, So It Goes, in the seventies. Saville made several appearances and has compiled a 'greatest hits' dvd. Of course, Saville and Wilson later became founding directors of Factory Records with Saville 'designing' the label.

Peter's nickname is Playboy Pete and she said that he would be the last to deny his playboy-ish tendencies. Referring to his notorious tendency to be late delivering every project, she said that he is "the world's most exasperating professional". Apparently, he was 3 hours late for the launch of his own book, 'Designed by Peter Saville'. Half jokingly she hinted that Peter has yet to turn on a computer(!).

Alice explained that in tribute to the great man, New Order contribute the soundtrack to the exhibition. This comprises and old and very new material (recorded in the last few weeks before the Show) and will play in all galleries except the one containing Saville's highly influential advertising campaign for Yohji Yamamoto.

Invitation to the launch party for the Peter Saville Show on 22 May 2003; inside detail 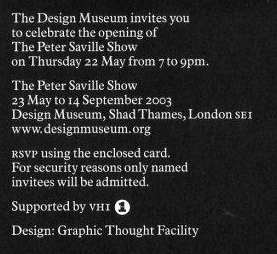 Invitation to the launch party for the Peter Saville Show on 22 May 2003; inside

Invitation to the launch party

The Design Museum invites you to celebrate the opening of The Peter Saville Show on Thursday 22 May from 7 to 9pm.

RSVP using the enclosed card.
For security reasons only named invitees will be admitted. 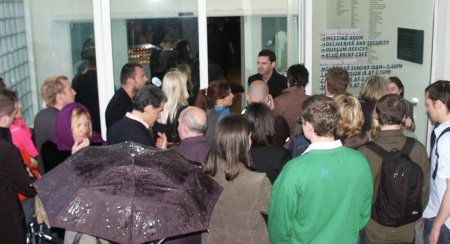 From the launch party queue ...

From the launch party queue...

The launch party for the much-heralded Peter Saville Show was a suave and sophisticated affair (hell, Peter York and Bryan Ferry were there!) but many of the invitees had to wait outside in the gathering gloom for their drinking and viewing opportunity. Some sought solace in local hostelries before returning when the rush had passed. Others like Brett Anderson from Suede did not linger or reappear. Saville was in attendance from the very beginning causing Alice Rawsthorn to lose her bet with Sir Terence Conran that he would not make by 8.59pm which she had disclosed the day before on Robert Elms's BBC London radio show. Enzo Cilenti, whom Alice had joked that they had got in as insurance lest Peter not show, made a late appearance, though the now shaven-headed actor little resembled "the best graphic designer in the world". The Peter Saville Show runs until 14 September at the Design Museum, London. 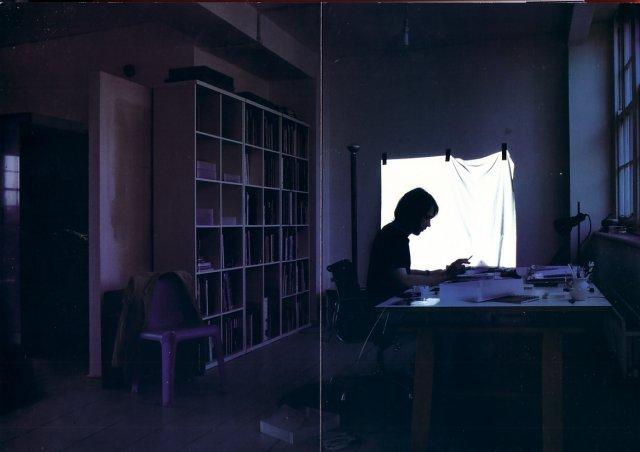 Invitation to the launch party for the Peter Saville Show on 22 May 2003; outside

The Peter Saville Show at Urbis