Extract from the NME article 'Turn On Tune In Throw Up! A History of Pop on TV' 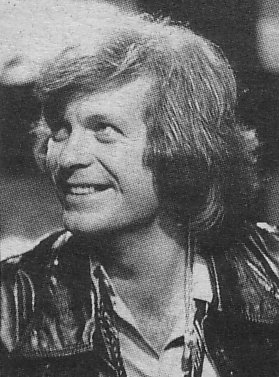 Tony Wilson - sultan of So It Goes

Ah, nostalgia. So It Goes worked for three reasons: it was simple - no ego interviews or vid frills - it was well-timed and stood alone - punk groups playing live on TV - and it was lucky, because it caught the moment and the moment was, for once, worth televising. For a brief period, it was worth filming an entire movement's musical efforts, which were also suited to TV, oddly enough. Even Jim Pursey was entertaining on So It Goes." Who's on Granada TV then," sneered the cockney clown on His Big Moment.

As presenter / organiser Tony Wilson continued the riposte to Old Grey Whistle Test's complacency. In a memorable cross cultural link-up he had Peter Cook apeing Match Of The Day's Goal Of The Month by hosting a Riff Of The Month competition. It was apt, Wilson himself had all the style of an unemployed Fourth Division player

Other seminal So It Goes slots came from the Sex Pistols (first ever TV appearance in the midst of the banned 'Anarchy' tour), very rare Joy Division footage, an incredibly sloppy looking and sounding Mark E. Smith leading The Fall through 'Industrial Estate' on the set of Coronation Street. There there was the Buzzcocks; one viewer swears blind that if you freeze-frame footage of them you can see Frantic Elevator Mick Hucknall gobbing from the front row.

Nowadays, of course, Mick's in Simply Red. And So It Goes? It's simply dead.

This article appeared in the New Musical Express 30th April, 1988.

What was the best thing about So It Goes?

It was all wild. There were only two series; one in the summer of '76 and another in the autumn of '77. The Pistols night was a standout, and the night we filmed at the Electric Circus, with Buzzcocks and Penetration. Basically, I got into it because all the way through the summer of '77 I would wake up in a sweat, thinking: someone else is going to realise this is great stuff. I can't believe it's so wonderful, it's gotta be on television. I remember going to see the producer Mike Appleton, an absolutely sweet guy, God bless him, and I asked, 'Why can't we have more punk bands?'. He said, 'Because music is about technical excellence, and if they're technically proficient I'll put them on'. To this I replied, 'Mr Appleton, you are completely and utterly wrong'. But that's what it was like then.

Why was the third series cancelled?

They'd had enough of me, and I can't blame them. My boss said, 'I don't need any more guys with horse's tails sticking out of their asses'. The musician he was referring to was of course Mr Osterberg. When we filmed him - and a wonderful show it was too - Jimmy had this horse's tail sticking out of his ass. Plus, in the middle of 'The Passenger' he yells out 'fucking', as in 'fucking cars'. So there's a week's debate over this one word, right? And I'm screaming ART ART this is fucking ART. After this I wanted to film the Pistols' Anarchy Tour, but someone got cold feet. A memo arrived in the office saying, 'there will be no mention of the Sex Pistols on this programme for the next month'. Of course I started waving my arms a lot and said I'm leaving, how dare you, etcetera etcetera, and I find myself hauled up to the big boss, where we came to a stalemate. By the way, the Iggy show was eventually aired, but we had to dub some loud clapping over the 'fucking' bit. So we did this, but then somehow we finished ten seconds too early. Everyone's clapping, the tape rolls on, and over the credits you can hear Jimmy shouting, 'Clap your fucking hands'.

Granada Television's So It Goes

Granada Television's The Other Side of Midnight

The Hitman and Her at Fac 51 the Hacienda

Granada Television's 'Celebration: Madchester - The Sound of the North'