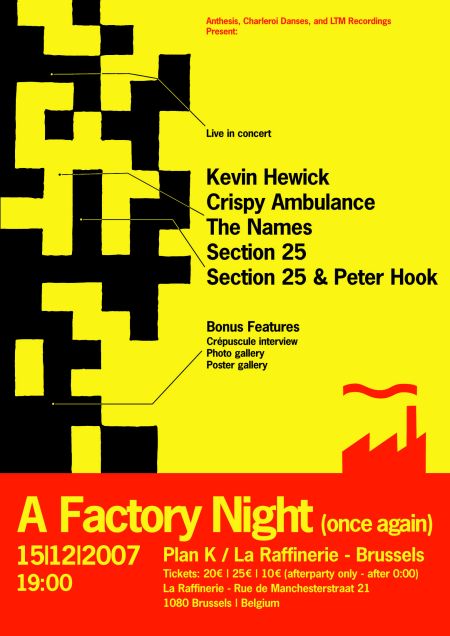 Calcutta
The Astronaut
I Wish I Could Speak Your Language
Discovery

LTM is pleased to present a DVD souvenir of A Factory Night (Once Again), the memorable live event staged at Plan K in Brussels on 15 December 2007 featuring live performances by Section 25, Crispy Ambulance, The Names, Kevin Hewick and Peter Hook.

Shot in High Definition with five cameras and a digital stereo soundtrack, the live section of the DVD features more than 2 hours of in-concert highlights (29 tracks) from all four bands, as well as the encore of the New Order classic Temptation by Section 25 and Peter Hook.

The 2007 event marked a return of these several original Factory Records artists to the legendary Plan K venue in Brussels after a gap of more than 25 years, during which the venue (a former sugar refinery) had ceased staging live gigs. The event was also a tribute to the late Anthony H. Wilson, the Factory founder who died a few months earlier.