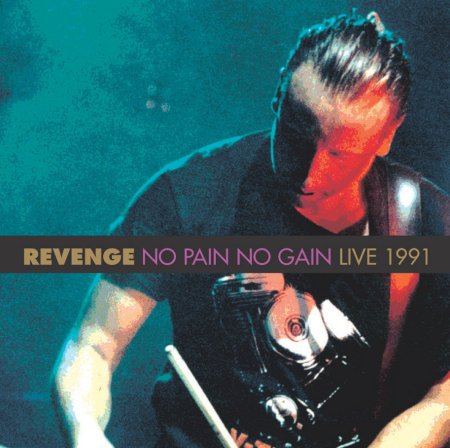 LTM are pleased to announce the first live album by Revenge, the electro/hard rock hybrid fronted by New Order bass player Peter Hook between 1989 and 1992.

Following on from the success of LTM's expanded re-release of the 1990 Revenge album One True Passion, the in-concert collection No Pain No Gain captures the band at their live peak in 1991. The first 8 tracks represent an entire performance at Manchester’s celebrated Cities in the Park festival in August 1991, while the remainder of the CD is culled from a show in Kawasaki, Japan, several months later.

In addition to hi-octane versions of Revenge originals such as Slave, State of Shock and Jesus I Love You, the CD includes storming covers of Dreams Never End (New Order), White Light/White Heat (Velvet Underground) and Citadel (Rolling Stones).

All material has been digitally remastered. The set contains 70 minutes of music and sleevenotes by New Order biographer Claude Flowers, including a new interview with Peter Hook.

Artist history: Following the release of Technique in 1989, all four members of New Order spent time apart to pursue other ventures. Never merely a solo project, Hook was joined in Revenge first by Chris Jones and Dave Hicks, and later by David Potts, who remained with Hook as part of Monaco five years later. In some respects Revenge can be seen as a dry run for Monaco, who went on to deliver a top ten album and single early in 1997.