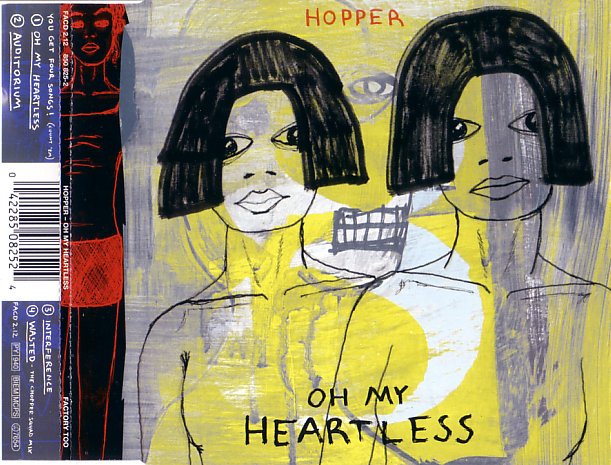 Factory Too announced the release of the fourth single by Hopper on Factory as follows: "Hopper release their fourth single for Factory too in late March. Entitled "Oh My Heartless" it'll be backed with "Interference" a reworking of the track from their "English and French" album, a new acoustic track "Auditorium" and a remix of "Wasted" by Manchester's lastest remixing team "Chopper Squad" whose fucked up take on the track has to be heard to be believed."

"Oh, My Heartless" was produced at RAK by Bernard Butler, with the excellent Nigel Godrich engineering. The two acoustic tracks on Fac 2.12 were done with Andy Mac at Revolution in Stockport and the Chopper Squad did the deed at Moonraker and PWL in Manchester with the nicest scouser we know, Neil Walsh. [from the now-defunct Factory Too website which is sometimes accessible via the Internet Archive Wayback Machine]

All tracks written by Hopper

Art and design by Ed Templeton

Tracks 1 & 3 (P) 1996 Factory Too
Tracks 2 & 4 (P) 1997 Factory Too
© 1997 Factory Too.
The copyright in this sound recording is owned by Factory Too and is licensed to London Records 90 Ltd. All rights reserved. Unauthorised copying, reproduction, hiring, lending, public performance and broadcasting prohibited.