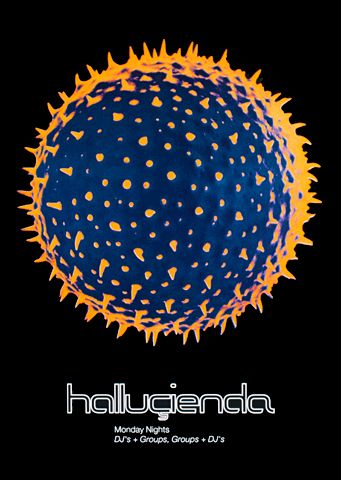 Julian Morey designed this legendary poster when he was working for Peter Saville Associates. He talks to Cerysmatic Factory:

"Hallucienda was a Monday night event at the Hacienda and, as the poster states, featured DJ's + Groups (and indeed, Groups + DJ's). The name of the night was Anthony Wilson's idea. The image is a photo of a pollen grain.

T-Shirts were also produced of the design - the first run were black T's and there were a further run of white T's with the pollen grain printed in green and purple. T's were long sleeve and the Halluçienda logo was printed on the sleeve. I'm not sure how long the night ran for but I am fairly sure the name of the night or the night itself was dropped due to the drug reference and the Club's later documented problems.

Existing publishing credits for this design have stated 1989 and 1991 - both are wrong. The poster was published 1990."

Thanks to Julian Morey for info and imagery. Check out what Julian's been up to more recently via his website at www.abc-xyz.co.uk (the Editions Eklektic and Environ Records stuff is probably the most interesting for anyone into Factory).