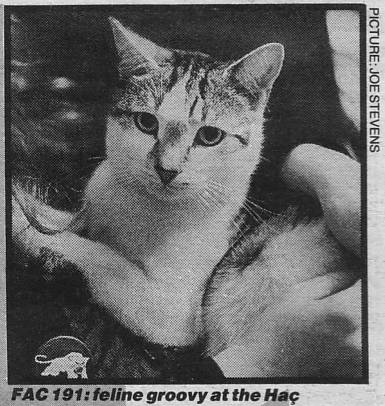 It was only to be expected. The Hacienda Cat was allocated its own catalogue number. No idea at this stage as to the significance at this stage of the number chosen. The photo was printed in the 17 October 1992 edition of the NME which celebrated the life and times of everything Factory.

"This is what I know. The cat lived in the basement in the early 80s - I presumed it was a stray. I seem to think it was either called Fred or that Fred was the person who fed it. It was never referred to as FAC 191 - we always referred to it as the Hacienda cat. I also seem to remember Teresa talking about it so perhaps she cared for it. It was scruffy and sort of in between black & brown.

The basement had a lot of tiny mice so it would have been ideal for a cat - I occasionaly found one (a mouse) pissed in the bottom of an upturned pint pot that had a little beer left in it. (I'm being completely serious here). I'm not a 'cat' person so would not be stroking it but I don't think anyone would have thought it was cute looking. I don't know what happened to it - I expect a canal rat got it in the end. I never saw a photo of it & don't believe that the photo in NME was the real one."