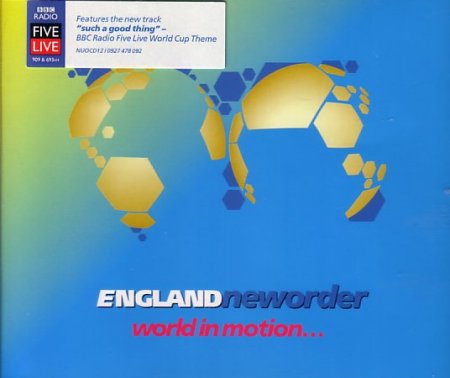 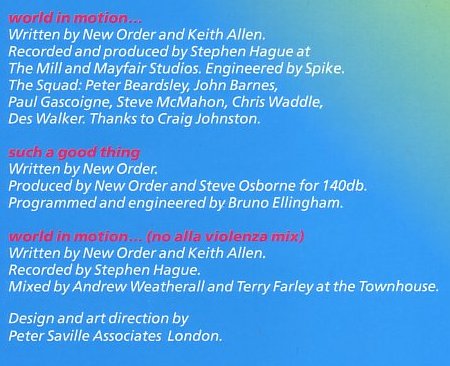 World in Motion... (no alla violenza mix)
Written by New Order and Keith Allen.
Recorded by Stephen Hague.
Mixed by Andrew Weatherall and Terry Farley at the Townhouse.

World in Motion by ENGLANDneworder, reissued for the FIFA World Cup in 2002 held in Japan and Korea; features the new track 'Such a Good Thing', the official BBC Radio Five Live World Cup Theme; also contains the original single version and the 'No Alla Violenza' mix by Andrew Weatherall and Terry Farley

World in Motion was originally released as the official England World Cup Song for Italia 90 (Fac 293). It was co-written by New Order and Keith Allen and was hailed as the best World Cup song ever in many quarters. The song features Kenneth Wolstenholme uttering the immortal words "They think it's all over... it is now". The video features New Order and a selection of the 1990 World Cup squad. It reached number one in the UK charts. World in Motion T-shirts, caps and shorts were produced with the catalogue number Fac 283.

World in Motion is not the only song by a Factory artist to have a footballing connection...

Black Grape, the band Shaun Ryder formed after the Happy Mondays', released England's Irie to coincide with Euro 1996 held in England. It was later used by BSkyB as the theme music for their extensive live and recorded coverage of the Football League.

Moody Places by Northside (the b-side to FAC 268 Shall We Take A Trip?) was memorably used by Granada Television to accompany their regional football coverage in the days of Elton Welsby

The BBC's Football Focus and Match of the Day also used to use various New Order songs to soundtrack many items. Somebody in the production team obviously liked them.