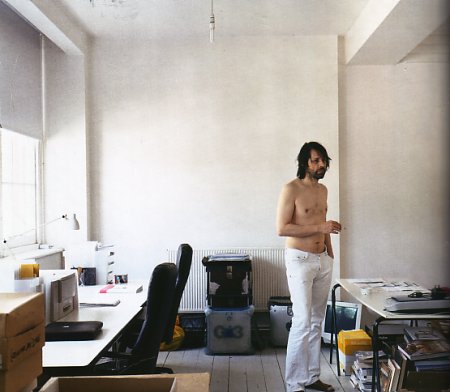 Peter Saville chooses a few of his favourite things for Wallpaper* magazine in this extract from an interview by Paul Barnes.

What couldn't you live without? Espresso, then a pencil and paper, and then a camera.

Your favourite object in your home? My Charles Eames 'Soft Pad' chair.

Your favourite album cover? Kraftwerk's Autobahn, because it had the most bearing upon my visual understanding. I'm sure I must have seen a motorway sign a hundred times and never given it a second thought, but in that context, my perception changed - opening up the idea of contextual meaning. While Autobahn had the most intellectual influence, Bryan Ferry's Another Time, Another Place was the most romantic. It addressed my provincial aspirations - searching for a world other than the one you knew, and the ambition that fuels.

What artists' work do you collect? Well I don't really collect because I can't afford to, but I do have Tracey Emin's Why I Never Became A Dancer, which I cherish, and a great collection of postcards. I would love a Franz West, I would love a Clay Ketter and I would love some of my mother's objets d'art. I've always liked the idea of a modern house with old art and an old house with modern art.