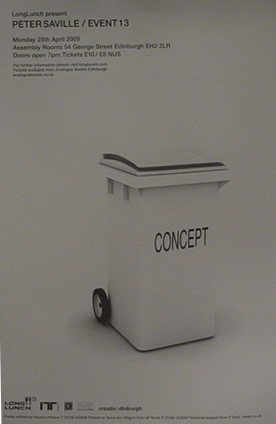 "An evening in which Peter, unusually decked out in black polo neck and black trousers, lounged urbanely on a red velvet sofa and talked about his life and career, prompted by questions from the host. The questions themselves were accompanied by visual aids concocted by the organisers, namely slides of Peter's work (taken from his monograph), with the questions rendered in various versions of Saville typefaces; this was either an ironic comment on appropriation, or the result of a deadline and some DTP software.

For the most part, the stories covered familiar territory, but there were a few new revelations (for me, at least). That he was paid the princely sum of 20 pounds for producing FAC 1, for instance. That the designer who famously told him that his ambition was to make fish finger packaging 10% better was Michael Peters. That the most he was paid for a record cover was for Peter Gabriel's 'So' (20,000 pounds. By comparison, the initial budget for The Music's last cover was 3,000 pounds). That he once took twenty lines of coke with a Factory band who must remain nameless here (GYAC, it wasn't The Royal Family and The Poor) while waiting for them to do a gig at LA's Universal Amphitheatre in 1988. And that he went back to the venue with the band to do the same thing again the next day. In this louche raconteur mode, he'd be a good guest on Parkinson, sandwiched between, say, Nicholas Lyndhurst and Nicole Kidman.

We also saw hints of the world-weary character that he has become in the last 12 years. He said that in the mid-90s, he mooched CDs off various Los Angeles record companies so that he could then sell them at Aron's Records to pay for food. He said that his latest New Order cover was a response to the band's request that he work for them, i.e. No. He said that he wasn't interested in music, let alone MP3s. That he didn't want to do graphic design. That he'd spent thousands on pornography. As my friend Belinda said, it was like listening to someone sitting on the psychiatrist's couch. And, indeed, you could have viewed the evening as a very cheap form of therapy.

The lack of time precluded any questions about his post-LA career, and some in the audience were disappointed. However, I suspect that many audience members (myself included) were perfectly happy to hear the tale of the Factory years recounted by one of the few survivors from the era. At least it'll have to do until Alan Erasmus finally gets round to telling us his side of the story."

More info including a transcript of the talk itself at www.longlunch.com

Thanks to Andrew James for the review.