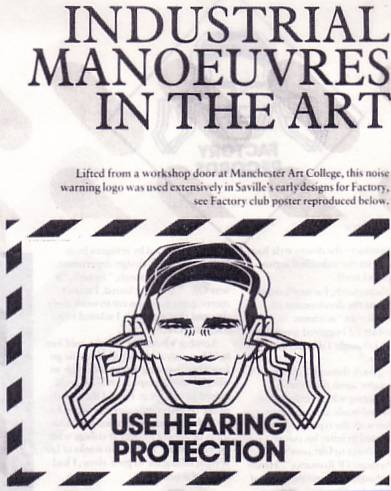 Lifted from a workshop door at Manchester Art College, this noise warning logo was used extensively in Saville's early designs for Factory

Extracts follow from an article which originally appeared in The Face, the UK style magazine.

Industrial Manoeuvres In The Art

Peter Saville is quite simply the best new album cover designer to have appeared in the last year-and-a-half. His refreshingly clear, technically clean, hauntingly atmospheric style made itself felt on the outstanding sleeves in which he packaged two of Factory Records' early releases, Orchestral Maneouvres In The Dark's 'Electricity' single and Joy Division's debut album 'Unknown Pleasures'. The latter was undoubtedly the most sophisticated and carefully conceived album cover produced by a British small label and, in tandem with the precision and quality of music it contained amounted to a package that ... much of the output of the bigger labels

Saville is from Manchester - hence the Factory connection - but is far from typically Mancunian. He's a figure far more likely nowadays to be seen at a smart metropolitan drinks party chatting with Bryan Ferry - who he physically resembles ....

... At Manchester Art College he found that "half the students didn't know what Graphics was" and that the innate prejudice against the clean-lined hyper-real airbrush style ran very strong.

He was lucky enough to find one tutor, Cameron McLean who "knew that the airbrush was what was going to happen; he found a first-year student who could use one, so he gave me lots of encouragement."

Other tutors, however, had to be faced: "The Fine Art tutors didn't like work that looked like a Sunday Times Magazine cover, they were worried that I'd get bogged down in one style."

Saville's infatuation with the airbrush lasted a year and "died a death", leaving him to "start to do nothing for eighteen months". During that period, however, another major influence appeared - or rather re-appeared - in the shape of a former schoolfriend, Malcolm Garrett.

Garrett was another Graphics student, but he had spent his foundation year at Reading University studying the history of typography. Under Saville's influence he moved to Manchester, rapidly becoming 'the star pupil' after an end of year show of 'Pop Dada' which used his formal training from Reading as source material. "Malcolm's style was the style; it had an incredible influence down here."

Through Saville's friendship with Buzzcocks' manager Richard Boon, Garrett began doing that group's early sleeve design: "He was the obvious person to do it, he was the most productive, adventurous designer around." The style, energetic, provocative collages with an emphasis on type and echoes of the Russian Constructivists and the German master of political montage, John Heartfield, became, became a reference point for punk iconography in the work of Linder, Jon Savage and the Sex Pistols' marketing stylist, Jamie Reid.

Saville's own admitted tendency to inactivity meant that "nobody wanted to be my tutor, nobody wanted the responsibility" and he finished the course by presenting a bunch of practical projects which he'd undertaken for friends - a singles sleeve for The Smirks and the interior design for a mate's clothes shop in Knutsford amongst them - and, to everyone's utter surprise, sneaking off with a first.

Around the same time he heard through Richard Boon that Tony Wilson was opening a venue for new bands at the Russell Club in the October of '78; it was to be called The Factory and some appropriate posters were needed.

Saville presented Wilson with two years' frustrated backlog of ideas," and he loved it". He got on with the job using a noise warning sign that had been pinned to a workshop door in college as his starting point.

Saville explains the thinking behind the move: "Malcolm had taken industrial image and made it pop; I left it how it was. The Buzzcocks' sleeve looked like a record - but the Factory poster didn't look like a rock club advert, so it made people look twice.

Despite their differentness, Garrett had introduced Saville to the work of 'The Important Man', 30s designer Jan Tschichold who had invented what he calls 'the New Typography'. 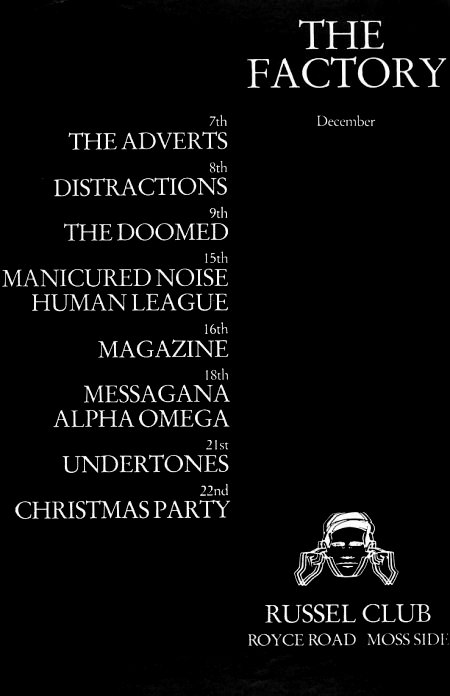 "It was," says Saville, "so simple and sparse and to the point" and therefore exactly in line with the philosophy behind his early Factory designs: "The crucial thing about graphic design is that you have to impart a message, information, and if that means simply putting a name on a piece of paper in the right type at the right size - then that's all you do."

By December '78 the ambitious Tony Wilson already wanted to put out a record. Saville became a partner in Factory Records. My contribution was the design and the packaging."

The label's first release, "A Factory Sample", featuring four acts - Joy Division, The Durutti Column, John Dowie and Cabaret Voltaire - utilising the same noise warning logo as for the original posters. Each contributor designed their own sticker to be included in the package, but the package was emphatically identified as a Factory product - the design style had evolved from the individual artists to the label itself.

From thenceforth, Factory's steady output charts the development of Saville's style - an "academic development: I'd buggered around at college, so I thought I'd better start learning now."

Looking back through Tschichold's work, he came upon the formal classical lettering which he'd used in the 1940s and made an immediate connection with the type face John Foxx had used to letter his colour typography cover to Ultravox's third album "Systems of Romance". Hence the frighteningly appropriate mood of the sleeve for Joy Division's "Closer" and his super-stylish cover for the new Ultravox single, "Vienna".

In another direction, Saville began another a close association with another early Factory coup, Orchestral Manoeuvres, the first of the label's signings he'd enjoyed musically, meeting in a Rochdale pub, they exchanged ideas. Saville told them about a book of avante-garde musical scores which he'd come across in Llandudno public library. Andy McCluskey said that he sometimes wrote down the tunes he composed in a similar shorthand.

"I also knew from college," Saville explains, "that shiny black ink on black paper worked, so I decided to suggest that. Tony didn't believe it, the band didn't believe it and the printer said it couldn't be done." The Manchester printer who Saville persuaded otherwise regretted his acquiescence; the printing - by a special heat process called thermography - was a success, but the place set on fire three times. The printer's insistence - "Don't come back!" - meant that the edition of 5000 was strictly limited. 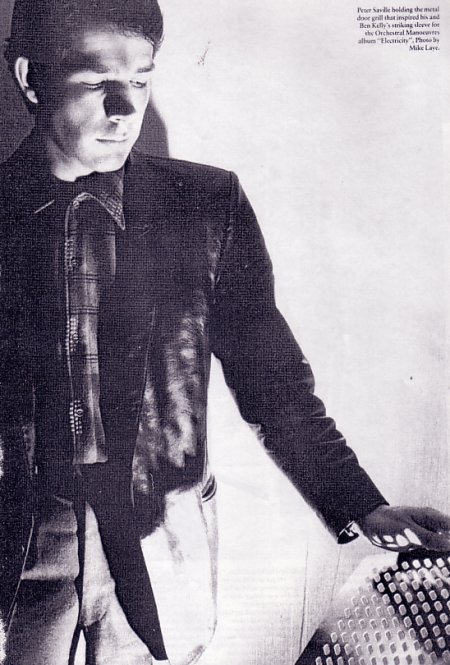 Factory wasn't producing any revenue for its directors at this fledgling stage, so that Saville - out of college and unable to sell his style to any of the Manchester agencies - found himself dependent on his parents for a year. Eventually he thought, with the aid of a motherly ultimatum, "Bugger it, I'll go to London"; you feel that there's this huge city where everything is happening and you've got to come up with something very different to get noticed.

Touting his portfolio around the metropolis, Saville was taken on by a company formed by refugees from Polydor Records design department, Acrobat. "For a month," he says, "it was OK. Then I got bored. I wasn't meeting anybody. I went to work every day and that was that. I wanted to go back to Manchester."

Acrobat's boss, Ian Wright, told him he'd be crazy and suggested Saville go freelance, backing up the idea with an offer of free deskspace until he could afford to pay for it. He did the rounds of the record companies and followed up fashion trade connections from his shop-designing project at college with the result that "within two weeks of Ian Wright telling me to go it alone, I had loads of work."

The biggest break came from Virgin, whose the head of publishing, Carol Wilson, was in the process of settting up her own label, DinDisc. Saville, along with his old buddy Malcolm Garrett, was invited to rough out possible logos. "I went home and did 27 possible logos. When I delivered them I said to Carol Wilson, 'If you ever need an art director...'"

She did. Saville got the job and, as the label's first major signing was Orchestral Manoeuvres, it made perfect sense. She bought him his drawing board and office equipment, providing a cramped studio room in DinDisc's new Portobello Road offices. Last year he did all of their design work, for a fee which - even taking into the premises and use of a phone into account - is a giveaway.

"It got very, very tricky," he says tactfully, his wages are now renegotiated to take account of the expanding volumes of freelance work which he's been offered.

As a result, Saville was asked to put together the sleeve to Roxy's "Flesh + Blood" in an overnight panic . "Now", he says with pride, "working for Roxy is like it is working with Joy Division or Orchestral Manoeuvres - it's 'Peter, tell us what you're thinking of doing'". 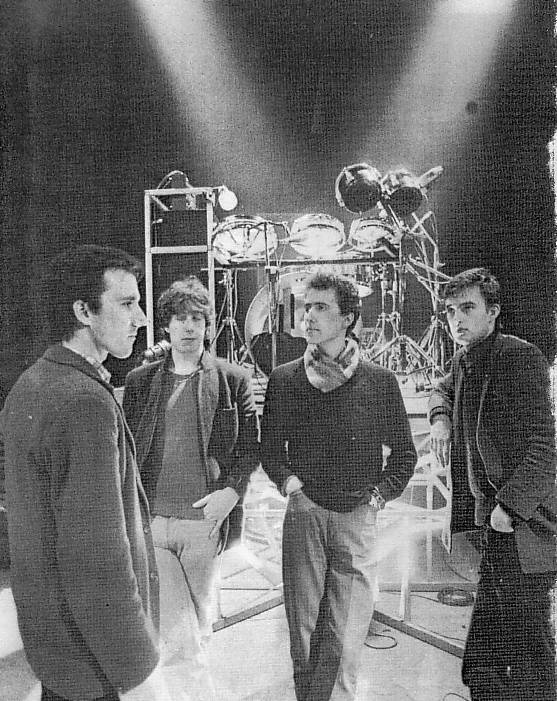 Orchestral Manoeuvres In The Dark: Saville continued his close association with the band when they moved from Factory to DinDisc. Photo Pennie Smith