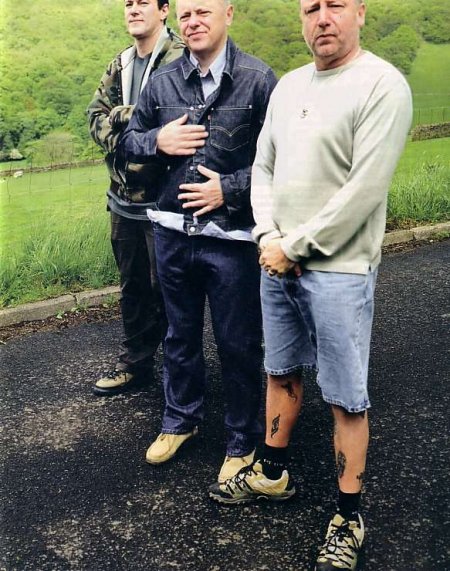 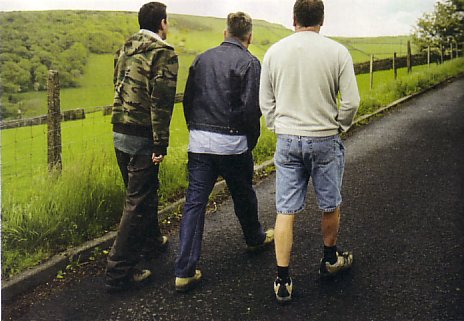 Against all the odds, New Order reconvened last year to make their 'Get Ready' album. And amazingly, they've yet to fall out again. Fingers crossed for their Finsbury Park gig this weekend!

'Fancy a tour?' asks Stephen Morris, New Order (née Joy Division) drummer, greeting us at his farmhouse in the countryside just outside Macclesfield, where he was born 44 years ago (he looks much younger). He tramps through the rain-soaked yard to a large garage, of the type you'd expect to house tractors. Inside are four tanks, of the type you'd expect to destroy cities. Stephen is clearly proud of the metal monsters, which he drives around his fields. But why tanks? 'I wanted an antique car,' he explains, 'but tanks are easier to get parts for.'

Stephen shares the farm with his wife, New Order's keyboard player Gillian Gilbert, who's taken a back seat with the band recently to look after their unwell child. We head for the farm's recording studio and rehearsal room where New Order have been preparing for a Paris gig, itself a warm-up for this weekend's Finsbury Park show. The house is swarming with roadies packing up gear. I keep out of the way, waiting for bassist Peter Hook and frontinan Bernard Sumner, both two years Stephen's senior.

Though quiet, Stephen is cheerful and good-natured. The studio is littered with set lists, all featuring a song called 'LWTUA'. What's that then, Stephen? A new one?---Love Will Tear Us Apart,' he smirks. Oh. Yeah.

Peter Hook arrives in his 4x4, tanned and relaxed in cut-off denims, with his dog, Mia. Bemard's late, so they start the interview without him - after all, it's been a big year for NewOrder and there's plenty to talk about. 'Get Ready' (their first album since '93) came out last August, and though by no means their best, it re-established New Order, with worldwide sales of almost 1 million. Then, in April, the film '24 Hour Party People' was released, bringing the story of Factory Records to a new generation, just as Kylie was mixing 'Can't Get You Out Of My Head' with 'Blue Monday' at the Brits. And to top it off, Sunday's Finsbury Park gig is their biggest UK date yet. Not bad for a band who've made music for 25 years and who spent most of the '90s apart.

Hooky reckons Oasis sold out their three Finsbury shows quicker than New Order's one because they're contentious, especially about their rivals. Haven't New Order got a rival? 'It was Crawling Chaos for a bit,' deadpans Stephen of a forgotten early Factory band, to hilarity from Hooky. What about The Cure - they went a bit New Order for a while? 'Nah,' says Hooky, 'although they were very, very... ' he trails off diplomatically. Even my mother got upset. Phoned me up, she'd just heard their 'In Between Days", she was like [in squawky Manc voice] "You've got to sort this out, our Peter!"

Conversation turns to the film. Hooky's seen it twice, Stephen three times. 'I enjoyed it,' says Hooky, 'but it's the most peculiar feeling. We sort of know the stories, but they elaborated on them.' Like when joy Division frontman Ian Curtis has a fit at a gig and Hooky is shown stealing cigarettes from the prone singer's pockets.

'That was me in real life,'admits Stephen, 'but it didn't happen like that.'

'It's all completely cock-arsed,' agrees Hooky.

Must be weird watching an incorrect version of your life. 'Yeah, it was,' nods Hooky. Plus, a lot of that Factory stuff was very, very distressing. We could've lost everything. I was a little taken aback when people were laughing. I didn't like that.' At which bits? 'The bits about us losing money and how fuckin' daft we were with the sleeve [to 'Blue Monday', which lost them money for every copy - that's 3 million - sold]. I expected tea and sympathy, not ridicule.'

'Someone wrote that one of the film's funniest moments,' says Stephen, shaking his head, 'was when Ian Curtis hangs himself because there's nothing good on television.'

Hooky bursts out laughing, breaking the mood. 'Do you think he did?!'

Bernard has arrived. Dressed in denim, he looks well. The rain has stopped, so we head outside for pictures. The photographer calls Hooky's camera shy dog into shot. 'I can't believe I'm being upstaged by a fuckin' dog,' grumbles Bernard. I ask Hooky how you spell the dog's name. 'T-W-AT,' replies Bernard.

Back inside, the interview resumes and the banter continues. Reminds Hooky, 'You were asking whether we'd still be doing it at 60.'

'That's a personal question,' says Bernard. 'He stopped having sex a long time ago, didn't you, Peter?' Hooky shrugs, flicking through a tabloid.

Fuckin' hell, put the paper down and concentrate,' snaps Bernard.

But the verbal sparring never tips from good natured ribbing to serious argument. New Order admit that they spent between '93 and '99 apart largely due to antagonism within the band. After 15 years in hotels, they needed time apart. It worked. Now, despite the constant piss-taking, their mutual respect is obvious.

'Yeah, we're getting on now,'admits Bernard. 'Better than before our... not split, but before we drifted apart.'

A decade after Factory's collapse, their conversation regularly returns to the extreme financial cock-ups of the Tony Wilson era perhaps because the film has reopened the wounds. The mistakes cost them millions.

'We couldn't concentrate on being musicians,' says Bernard. 'We were getting called to meetings about whether we should sell cheeseburgers at the Haçienda. We're musicians, not fuckin' businessmen.

'We should've fuckin' realised,' he laughs ruefully. 'You think: How could I have been so stupid? But all we cared about was having a good time. A lot of musicians are like that. The creative side of your brain is really developed, but the organisational side isn't required. You've got your tour manager, you get an itinerary under your door, you don't have to think.'

'Like Slash outta Guns N' Roses,' agrees Hooky.'He'd been on tour for three years, desperate to get home. But then he got home, woke up in the morning and was sat like, "What the fuck am I supposed to do now?"'

'He could've got a fuckin' haircut,' says Bernard.

These days, New Order's energies are focused wholly on their music - which is how they explain the success of 'Get Ready'. Not that everything's rosy in New Order's world. Bernard really doesn't enjoy touring. I don't like sitting in hotels,' he says, flatly. 'It's a four-star prison. You end up drinking and staying up all night. I don't wanna do that any more.'

'You come offstage and you're fuckin' high on adrenalin,' explains Hooky. I dunno how people like Status Quo can finish a gig and go back to their hotel room for a cup of tea.'

'Will you stop bringing Status Quo into our fuckin'interviews?' pleads Bernard.

'I don't think our young readers can relate to Status Quo,' spits Bernard.

Fuckin' hell,' laughs Hooky,'I bet our young readers are wondering who the hell we are!'

Bernard enjoys his time away from the band and prefers sailing to touring. 'It's having a balance,' he says. 'In the past our life was all about the group. And it should be at that age, if you wanna be successful. But now I wanna see other things. I don't wanna die having just experienced one single aspect of life, I wanna expenence the world.' Hooky, meanwhile, whose hobby is decorating, still lives to play live. I just love it,' he says.

One of the few things the quiet tank enthusiast, the tour-weary sailor and the happy-go lucky DIY buff agree on is that they're glad to be back and they're definitely making another album soon. They expect it'll take around 18 months to finish and seem cautiously excited at the prospect.

Time's up. Before Hooky drives us to the station, there's just time to ask if they're bitter about the whole Factory thing. 'It's either laugh or cry,' says Hooky (who tends towards the former).

'We would be if we were broke,' says Bernard (probably the latter), 'but we're not.'

'And there was no sinister intent, it was just plain stupidity,' says Stephen (somewhere between the two).

'But the great thing about the film is that it's putting our music back out again,'says Hooky.

'I don't think you'll get back the million quid you lost,' says Bernard, typically.

'No, without a fucking shadow of a doubt,' concedes Hooky. 'But it's better than a kick up the arse.'