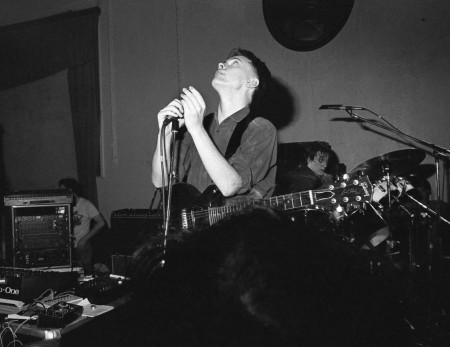 "On the eve of Joy Division's first U.S. tour - May 1980 - Ian Curtis dies. Tragedy. Shock. The band's first NYC appearance was scheduled for Hurrah - a club I was very familiar with having spent the the previous year photographing many groups. A year passes and finally in the Spring of 1981 the band plays NYC. A new name but the spirit of Curtis lingers. The hall is packed. The mood somber. This photo brings him back." - Eugene Merinov.

To view more photos by Eugene Merinov and for information on how to buy prints, please visit eugenemerinov.com.

With thanks to Tim B and Eugene.