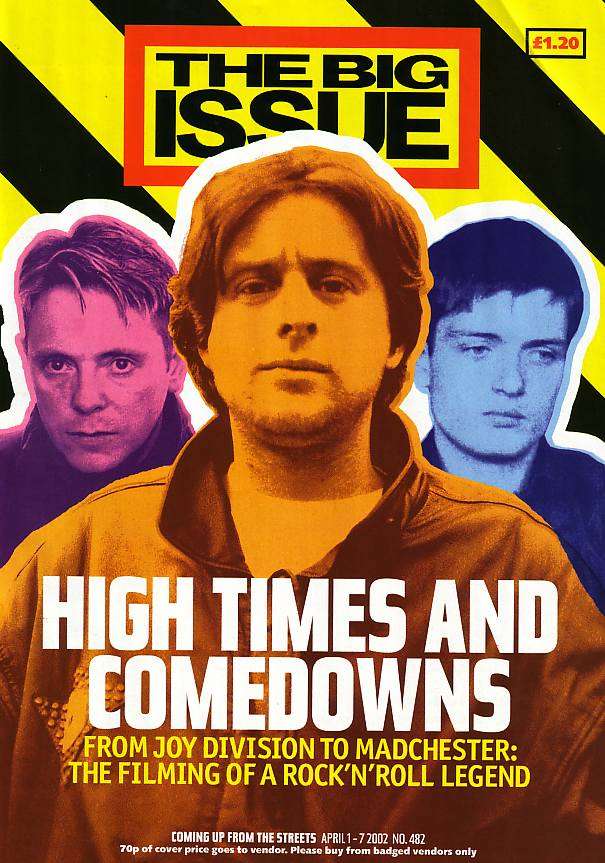 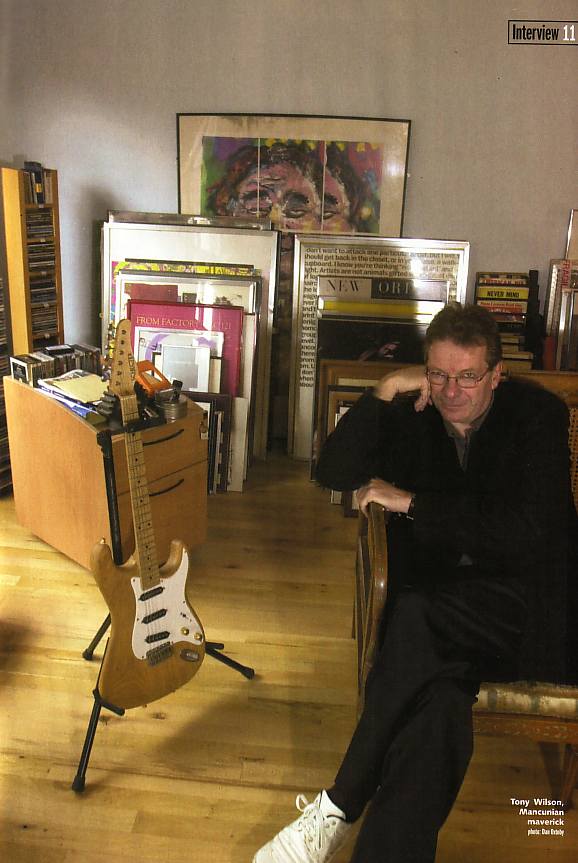 Tony Wilson relaxes in front of what seems to be a very large collection of Factory-related posters including FAC 121.

Transcript of the interview

Tony Wilson's eyes are shut. The man who changed popular culture twice is not lost in some otherworldly fantasy, it's just that it's 9am and I don't think he's been to bed. His face is reddening by the minute. Although happy to swear his way amiably through the interview, his eyes remain resolutely heavy in that grizzled, seen it all face.

Tony Wilson. The professional Manchester Messiah aka the Pretentious Twat. A man happy to hold both sobriquets he once recast himself as Anthony H Wilson as long as he is being talked about. Now he's up there on the big screen, the central character and antihero of 24 Hour Party People, the film of Manc music, circa 1976 1992. The Wilson years.

"I'm an elitist, I had the greatest band of one period Joy Division/New Order and then the greatest band of a second [Happy Mondays]," says Wilson. "But you don't take the ball home if you only score twice. It's my dream to do it a third time, my absolute dream," he says, pumping himself with coffee and kudos.

Act one begins with Factory Records signing Joy Division, with a contract written, according to the local myth, in Wilson's blood: "The musicians own everything, the company owns nothing. All our bands have the freedom to fuck off." It was this unconventional, anarchic approach to the music business that ultimately led to Factory records going bankrupt in 1992.

It could have ended with the suicide of Joy Division's front man, Ian Curtis, in May 1980. "And that should be it. The end. Give up. Go home," writes Wilson in the tie in book of the same name. But they don't. The remaining members of Joy Division become New Order, they become massive and, together with Factory, open a club called The Hacienda.

The club, based on a New York design, opens about five years ahead of its time. Which, by a remarkable piece of good fortune, was exactly the time when I, a good Stockport lad, first walked into the doors of the Hac in the summer of 1987. Which was about five minutes before the Acid House sun was to rise. Quoting Wordsworth, Wilson sums it up: Bliss it was in that dawn to be alive, but to be young was very heaven." I was very, very heaven.

And it was in there that a young man called X (aka Shaun Ryder, Happy Mondays' singer) was knocking out a new drug called Ecstasy. Dance culture was born. "The most singular credit of that era goes to the Happy Mondays," says Wilson of their music and Shaun Ryder's lyrics, which he elevates to Byron/Shelley status. "And also," he adds wryly, for being at the centre they weren't, but their close friends were of the [Ecstasy] importation business.

The Happy Mondays, with their baggy style and shambling swagger, reinvented rock as dance music. And they also had Bez, the original freaky dancer who, er, played maracas.

Shaun Ryder wrote the line "24 hour party people", but it wasn't about bands, it was about parties and drugs. And Manchester took over the world, and the cover of Time magazine. It twisted melons. Wilson had done it again. The late 1980s pulsated with a heartbeat spread from the Hacienda. Then came the drug casualties and the gangsters.

The first reported Ecstasy death of 16 year old demise. The club kept the death hush hush for a week. One of the club's DJs was alarmed and didn't like the cover up. He told me: "You're a journalist, do something about it." I tipped off the national press and the story splashed across the front pages.

"We had the usual crisis meeting," Wilson remembers. "There was a feeling of, 'Why us, why our dancefloor?'," he says. "First of all there was revulsion and tragedy and sadness. That kind of death is pretty awful. None of us knew about Ecstasy deaths then the idea that someone's body boils. And also we didn't understand the repercussions. Complete underestimation."

As Madchester became Gunchester and the gangs moved in on the drug trade, the Hacienda's star began to fade. "There were strange meetings and deals done with chief superintendents in graveyards on Sunday afternoons," he remembers, "but it was just a constant nightmare and we closed."

But 24 Hour Party People is not a complete social document. There are yawning gaps and myths are favoured over facts. And those who are not name checked are rounding on the fiction factory.

Photographer Kevin Cummins, who documented the era, is a critic of the Tony Wilson show. "Everybody self mythologises. In Manchester, maybe that's what we're like. I don't really understand them making a film like that then making half of it up. They should've made a film about the Hacienda in its heyday, but they tried to do more than that," he says.

Wilson has attempted to defuse the dissent with characteristic humour. "The film is a betrayal of Manchester, not a travesty, a disgrace," he joked in the local press. "It doesn't do justice to The Smiths or The Stone Roses or Barclay James Harvest." Factory famously failed to sign Morrissey's doom mongers, The Smiths, and through bad luck and bad association never got a look in with lan Brown's Chorlton massive. Barclay James Harvest? Just Tony's little jest.

And so it goes. Until now. Act Three of the story the part that's not in the film. Tony Wilson is setting up a new record label and plans to go back to front the northwest's flagship six o'clock news programme in 'Granadaland'. And of course he calls Red Cellars, his brand new record label, set up with ex-Factory man Warren Bramley, "the new Factory".

"There was no point in having a record label in the last dull days of the 1990s," he says. But although there are no signings yet, "it has become clear that the next big thing will play guitars which came as a bit of shock."

Usually he'd be more than happy to publicise his current venture, but this time he's revealing little. "It's taken me until I was 52 years of age about three months ago to stop being a show off and stop telling people about new bands."

And will he return to the Granada evening news? "Who knows? I still have this idea of taking my TV career seriously. My agent says, 'We'd be really excited in reviving your television career, that is, if any one of us had the slightest inking that you had the slightest interest in your TV career'. Which is fair enough."