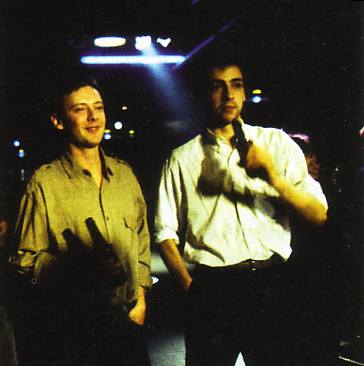 Come in, come in, says the press officer, guarding the door to a dingy nightclub. 'Joy Division are on soon.' Outside it's a dreary lunchtime on Manchester's Oxford Road, 2001. Inside, it's latenight 1979 and the crowd's going wild because Joy Division are coming on. Peter Hook's bass rumbles, the drums clatter and, eventually, Ian Curtis arrives onstage, flailing wildly as he starts to sing, Feel it closing in, feel it closing in...' The hairs on my neck are pogoing. I'm watching the band whose singer died 21 years ago. It's amazing. Well, it is until the director yells 'Cut!'.

I'm here to check on the progress of '24 Hour Party People', Michael Winterbottom's new film following Tony Wilson's Factory Records from its inception as punk began in 1976, to its demise, post Madchester, in 1992.

Factory was the Manchester label behind Joy Division, James, New Order, The Hacienda and the Happy Mondays. (Yeah, and Northside too, but hey, no one's perfect.) But it was no ordinary label. Wilson, its head, presented the local TV news. It was an idealistic label, without contracts for artists (except one, written in blood on a napkin, saying 'The artist owns everything). It was a non-conformist label, with no press officer, which refused to play the game; a non-corporate label which cared so much about design that it gave New Order's 'Blue Monday' a sleeve which lost them 5p for each one sold (it became the biggest selling 12" ever); and now a label with its very own movie.

'We started talking about Factory in the pub,' says Winterbottom's producer, Andrew Eaton, as Joy Division break while an extra receives first aid for over-realistic moshing.' Michael grew up in Blackburn watching Tony Wilson on TV and we both loved the music. So we went round interviewing people, collecting the stories. After a while we realised they were so brilliant it was too good a story not to do.'

The lead was cast before the script was written. 'We knew Wilson had to be Steve Coogan,' says Eaton. They'd worked together. And Tony gave him his first ever gig - at the Hacienda. He was ideal. 'And yes, Eaton concedes, there are similarities between Wilson and that other pompous media celeb Alan Partridge.

When Coogan agreed, the film began to take shape. Rumours filtered out of Manchester. It was to be a comedy. The legendary Hac was to be recreated. Everyone from Mani to Mark E Smith had cameos. And Shaun Ryder had demanded De Niro play him.

The vibe on the set is surreal, organised chaos. You're not sure if you recognise the actors or the people they're playing. Winterbottom encourages the cast to improvise and keeps the camera moving. And there's a real feeling of excitement. Eaton insists it isn't always like this. 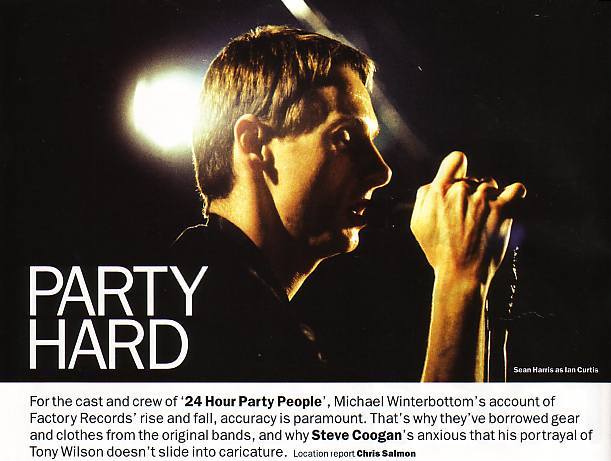 I grab a word with Ralph Little (sic), who plays New Order/Joy Division bassist Peter Hook. This is slightly awkward given Hooky's acrimonious divorce from Caroline Aherne, Little's mentor on 'The Royle Family'. I haven't spoken to her about it,' he admits. 'I don't think I should. I should meet him and form my own opinions.' He stretches confidently. 'Unfortunately, I've not met the bastard yet. I just hope a young Peter Hook was a lot like Ralph Little, otherwise I'm fucked.'

Like the others on-set, Little veers into character during the interview. Either that or he's as cocky as the young Hooky he plays. Whichever, there's no doubting the casting director's judgement. Especially considering the 20-year-old Mancunian knew so little about New Order before the film:'I thought New Order were like early Pet Shop Boys,' he says. I wasn't interested in chart stuff.'

The press officer steps in to say it's time to talk to John Simm, who plays New Order frontman Bernard Sumner. Cue return to Hooky. 'Yeah, you don't wanna miss out on fuckin' John,' spits Little. "Cos it's always more important to get his fuckin' interviews than fuckin' mine.'Like I said, it's all a bit surreal.

It gets more so. Simm can't speak because he's choking on his lamb kebab. He disappears into the toilet, eventually reappearing looking decidedly green.

'I had to puke it up,' he says feebly. Being older than Little, Simm was a huge New Order fan and desperate to be in the film. 'Michael told me about it when I was doing "Wonderland",'he says,'but then I saw in NME they'd nearly finished casting and I was like "No! Fuck! ". Luckily, Michael rang the next morning.'

Simm as Sumner is another fine piece of casting. They look alike and Simm plays guitar in his own band, Magic Alex. I always hate films where people can't play,' he says, gingerly heading back for another take. 'You can always tell.'

You certainly can. Music films are like football films in that respect. There's nothing more cringeworthy than people who can't play pretending they can. It's something everyone on set is aware of. They know about music fans' trainspotter tendencies. They've borrowed instruments and clothing from the bands involved. And, thanks to a fella called Martin Moscrop, every detail of the music has been recreated exactly.

'The college where I teach sound technology hires out a recording studio,' says the affable Moscrop. 'The location guy came down and we started chatting. Then Michael came too.'

Moscrop, they discovered, was in A Certain Ratio, one of the original Factory bands. He was there throughout the years the film covers. Heck, his character's even in it. Through utter chance, they'd stumbled upon their music co-ordinator. That Factory magic's still working.

Moscrop loves his role. I wanna make sure it's authentic. I've taught everyone the right chords, the right movements, so that any anoraks watching won't be able to say "This tune's in E and he's playing in A". I was at these gigs, I played with these bands.' Moscrop has even painstakingly recreated versions of tunes that didn't exist. His work adds enormous credibility to the film.

As Moscrop rushes to tell Joy Division's drummer he needs to 'fuckin' lay into the drums more', Shaun Ryder arrives. At least he looks, sounds and walks like Shaun Ryder. It's actually Danny Cunningham, and De Niro he ain't. Does he think Ryder will like his portrayal?' I fuckin hope so,' he grins.' Otherwise I'll be moving to Outer Mongolia!' 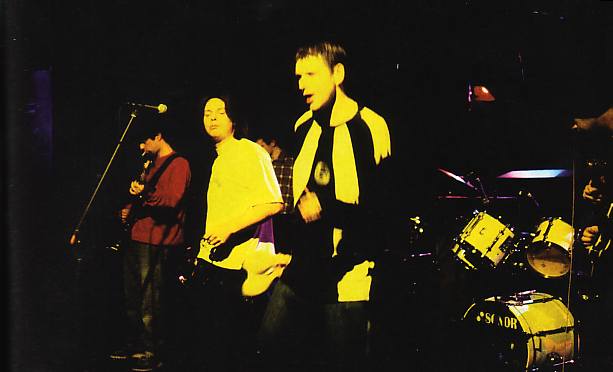 For the next scene the extras mosh enthusiastically without music while Coogan's filmed moving among them. With his bouffant hair and not-quite-right clothes, the likeness to Tony Wilson is spooky. But then, as he admits when he sits down to chat after finishing for the day, he's been doing impressions of Wilson since the '80s.

'I co-presented a regional TV show with him,' says Coogan, who's more hesitant and nervous than you'd think.' There are elements of Alan Partridge about him. But he's the left-wing, avant garde Alan Partridge.'

Not that Coogan is out to ridicule Wilson. Having got into the whole Factory scene through elder brother Martin (who fronted The Mock Turtles), Coogan's respect for his old colleague is obvious. 'What he did was very brave. There's a pompousness that's endearing. And looking back, he had foresight and vision. He wasn't cynical. I think history will be kinder to him than his critics.'

Like the others, Coogan's passion for the subject matter - and the director - is unquestionable and infectious. When'24 Hour Party People'is released in April, some Factory fans will be disappointed. Sixteen years crammed into two hours means some facts are changed, others ignored. But ultimately that passion shines through.

'I'm enjoying making this film. more than I enjoyed making my own ['The Parole Officer']' says Coogan earnestly. I don't know whether it'll turn out good, bad or indifferent - I suppose these words may be thrown back at me but I'm not finding it difficult. It's very enjoyable. It's a holiday for me.'