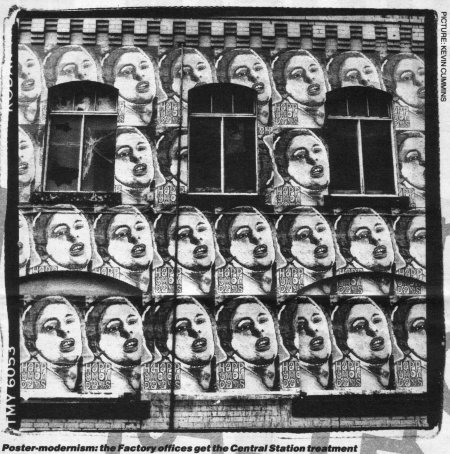 Sleeve it out! Designers of the artwork for Happy Mondays, Northside, James and others, Central Station are crayon one, matey (or something). Following its success in Manchester, their exhibition now moves to London. Mandi James won't palette it lie!

Matt and Pat Carroll would rather crack open a brew than pick up a pencil, they moan that they can't draw and can't paint, and yet they've provided the visuals for a major musical uprising.

Their technicolour graphics, block(ed) capitals and casual images are already splashed across half the scrawny bodies and bedroom walls in the country. Having designed the visually eclectic covers for Happy Mondays, James and Northside, Matt and Pat have kicked art into the '90s, dusted off the cobwebs and made it accessible, relevant and fashionable.

Through cutting corners, dribbling paint and clashing colours, their design company Central Station have taken art down from the top shelf and shoved it right back where it belongs, back to reality and into sticky fingers.

"I only got an E for me art," sniffs Matt. (better than a poxy O level - ed) "My art teacher was well into it, but when all those old fellas come into the room to mark me work they weren't into it at all. They failed me and I didn't give a shit, 'cos I knew even then that what I'd done was a million miles better than anything they'd ever thought about."

Having drifted through school, avoiding, as you do, as much work as possible, Matt and Pat Carroll stumbled upon Salford Technical College and on to a graphics course.

"All we really learnt how to do there was drink. Going to the Tech was a way of avoiding the type of people we knew were waiting for people like us, 'cos once you're in that routine of a shitty nine to five, it's more and more difficult to get out of it."

Meanwhile their cousin, an ugly, conniving bleeder by the name of Shaun Ryder, had started crooning in a casual fashion with some mates. When Happy Mondays eventually got round to releasing their first single, 'Delightful', Matt and Pat were called upon to design the cover. Next came 'Freaky Dancing', decorated with alien, angular silhouttes and the rest, as they say, is history. 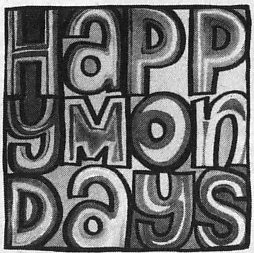 The Mondays' 'Wrote for Luck'

"We started Central Station more as something to do which we enjoyed," explains Pat.

"Whenever the Mondays have recorded we've always been there from the start to listen to the music, which is where we get all our ideas from. Same with Northside, we watched them practising before Factory had even thought about signing them, so it felt easy and natural to be designing their covers."

Matt and Pat, like their peers, have ignored styles and conventions and gone their own sweet way. They're as far removed from the bombastic, up-it's-own-arse attitudes of modern art as they are from its sombre, traditional trappings. Which is why 'Hello Playmates', Central Station's first public exhibition, is such a breath of fresh air.

Picture this, when Matt and Pat first hit Manchester with their exhibition, set among Pre-Raphaelite nudes and dusty Constable landscapes of Manchester's City Art Gallery, were Sooty, Nobby Stiles, Barbara Windsor and Bruce Forsyth. 'Hello Playmates' is a collection of iconoclastic portraits of tangible folk heroes, proper characters and tacky misfits taken from TV culture. And now they're moving to London, namely the Decorative Arts Group, partnered and financed by, among others, Pet Shop Boy Neil Tennant.

Whilst the rest of the art world is busy looking backwards to move forwards, Matt and Pat have simply delved into their childhood and focused on the most memorable characters.

"The paintings are our interpretation of real eccentric characters," drawls Pat. "Everything we do is sub-conscious, we don't acknowledge any limitations. I guess we've tried to retain the naivety of a little kid."

"We don't consider ourselves to be artists," continues Matt, "because we're not that good. But we've got a knack for drawing attention to some of the most obvious points of a person - because at the end of the day most people are fucking ugly. We've not gone about things deliberately trying to make them look like cunts, we've just tried to bring out the character in their faces."

'Hello Playmates' is also a chance for Central Station to show there's more to them than meets the public eye, and to bring in visitors who normally wouldn't set foot inside a gallery.

"We want to draw in people who normally wouldn't have gone to an art exhibition in their life," explains Pat. "I don't give a shit if people go in even for five minutes and think that we're crap, at least we got them in there."

It's the kind of exhibition most establised galleries wish they had the balls to take, but they don't. Their loss.

"Manchester's Art Gallery were worried about our exhibition," grins Pat. "They were proper worried about who'd turn up, but they're all our mates so it was alright. Mind you, we had people who came down thinking there was a proper party going on, they've just not understood what it's about. For the opening, the Manchester Evening News wrote a piece saying how Shaun was flying back from America especially for it and we even had people phoning us asking when the Happy Mondays were playing the art gallery."

Sponsored by Factory, the exhibition's opening gala was far removed from the polite cheese and wine functions usually reserved for the upper crust as family, friends and the odd pop star turned out in support. Reni Rose popped by, chainsaw in hand, and was left well alone; various Inspirals and 808s were found slumped under the paintings, beer cans clutched to their chests; Neil Tennant and Barney Sumner, looking brain-dead and bleary-eyed, took five from the studio; and even Mick Hucknall swanned in twirling his walking stick.

In the following weeks the gallery rarely received so many visitors. Those who normally only use the gallery steps for somewhere to stop and have a puff actually ventured upstairs to check out what was inside.

"When Jagger and Bowie played in Manchester," grins Pat, "we had people from the gallery phoning to say they'd turned up. Our fucking heroes them two, and they turned up with bodyguards and everything to have a look round our pictures. I'm pissed off we never got to meet them though."

Truely gobsmacked by the reaction to their exhibition, Matt and Pat are finally getting the credit and recognition they deserve. Their lives won't change, but their bank balance will. At £500 a shot, the portraits are flying out. Among the buyers are Anthony H, always keen to put his money where his mouth is, who's snatched up the Ken Dodd portrait as a present to the comedian's lawyer, now battling to save the Hacienda.

Aren't the brothers a little overwhelmed at their success? Matt shrugs his shoulders and states nonchalantly, "I'm mothin', you know what I mean. I'm just from Little Hulton, I'm fuckin' lucky to even be in a position to be doing all this. Me and Pat have shook each others hands many a time, saying 'Fuckin' hell man!' We can hardly believe it." 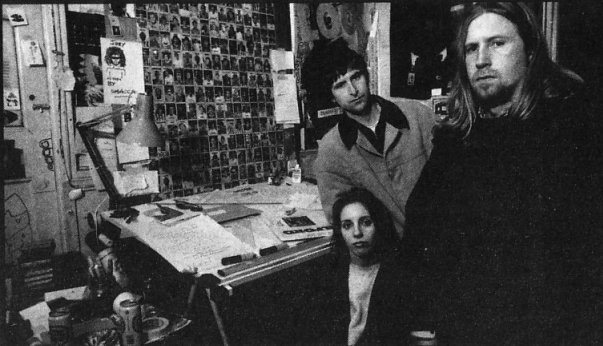