The Royal Family and the Poor > Boucd 6607 North-West Soul 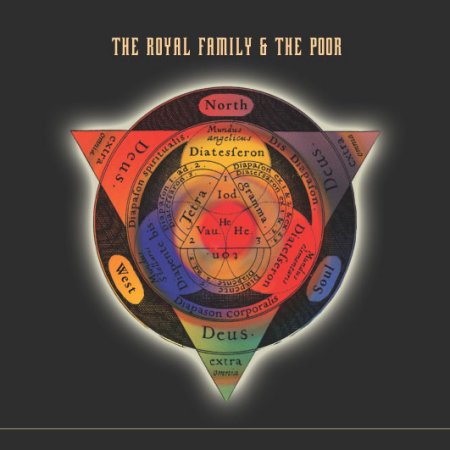 The Royal Family and the Poor were on this occasion Mike Keane and The Discarnate Angels of the Revolution.

Design concept by Mike Keane. Co layout by Julien Potter at The Boxroom

All material released under license from Gaia Communications and Mike Keane. Copyright reserved.

Mike Keane would like to thank the following for their support and friendship and encouragement during this difficult period in my life that the album was conceived in: Bill Heidrich, Arild, James Nice and LTM. And Loa my cat.

"I have learned that we do nothing 'alone' nor are we ever rarely alone, we just don't know how to recognise that which constantly watches over us. All we need to do is wake up to the possibilities and unchain our minds". Mike Keane, 2.49pm, 4th February 2004, Liverpool, England.

The Boutique label is a division of LTM.

From the Royal Family and the Poor page on the Boutique website: "Boutique announce the release of the first album in five years from Royal Family & The Poor, the cult avant-folk-electro collective overseen by reclusive Liverpudlian bard Michael Keane. Formed by Mike Keane and others in 1978, an early Situationist agenda saw them join Factory Records in 1980. After two albums (Temple of The 13th Tribe; We Love The Moon) and several singles, the Royal Family left the label in 1985, releasing further albums in 1987 (In the Sea of E) and 1999 (Songs for the Children of Baphomet). Currently the band is Mike alone.

Keane's concern with occult and secret knowledge has too often obscured the fact that he is a genuinely gifted songwriter. Moreover in recent years fragile health has increased the gap between new albums, yet North-West Soul more than justifies the wait. More open and honest than previous outings, the tracks reflect the dreams and aspirations he had struggled to realize in Toxteth over the last few years - hence the title. Never easy to categorize, the new music touches on ballads (Leaves In The Wind, Sweeter than the Day), dark electronica (Midnight Symphony) and eerie, bittersweet electropop (Falling, Long Time Coming).

Boutique is a division of LTM Publishing.

OK, well, "North-West Soul is a collection of songs that were adapted to music I had been working on for some time, others were written from scratch especially for the album.

This was by far THE most difficult album Ive ever had to produce, not least of all because I had lost all of my confidence having not recorded any serious work for so long (10 years) & also coz it's REALLY hard to get the overall sound and balance right on hard drive digital recorders. Life was SO much more simple when everything was analogue..... the problem with digital recording is that it is an utterly NON-musical prosess/way of recording, for example - with digital recording there is NO preference in the recording hardware towards HARMONICS, it just records a HUGE resolution of non-audible audio, in fact it records up to 80% of non-audible white noise, black noise and all sorts of other non-audible frequencies whicgh are NOT even needed OR wanted as they effect and interfere subtly with the "harmonics" of the notes you are trying to play - what this means is that it makes controlling and manipulating the tracks and overall mix so much MORE difficult coz unless you are adept as knowing how to strip and balance the frequencies for EACH track of audio they cross each other and create discordiant sub-harmonics that decrease the clarity of the sound.

Plus I was working with a digital 8 track hard drive recorder and digital recording is VERY difficult to get "just right" ESPECIALLY when your using budget equipment with cheap d/a converters, what this basically means is that you have to be VERY careful not to use the digital connections too often - for example a track might sound so much better recorded digitally but once the master is transfered to a master-cd recorder this means it has already been digitally transfered a number of times within the d/a converters within the equipment used - resulting in serious degradation of the overall signal - AND this gets even worse when it then has to be digitally transfered to somebody else's mastering equipment in order to finalize it for cd manufacture.

The long & short of it is that I had to spend a ridiculous amount of time struggling to balance everything out and get rid of alot of noises.

But that's just the tech side, here are notes about each track.

Title: NORTH-WEST-SOUL. Inspired by several "sacred" sites that are NW including that Crowley's old house in Boleskine, Scotland is due North-west in the UK. Also coz I live in the North-West. All the tracks are very much influenced by the time of year they were written and recorded (autumn / winter 2003) and how this time of year tends to make me reflect on mortality, death and what it is I love most about being alive, the trees, the sky, the air, dreaming, the long nights, grey skies, etc.... and of course the condition of the human soul, solitary, universal, lonely as hell, immortal but alone, in fact I believe the entire universe was created out of loneliness!! :-) The irony is that despite the fact that we are surrounded by other so-called "human" beings one can still find oneself as isolated and alone as one might in the desert - odd that I sent it? I've been a hermit for over 10 years, what people cannot understand they tend to fear, so despite the fact that my "message" has always been about "love" & "will" people tend to steer clear of me. A while ago I came to realise that people don't love "me", they love the "idea" of "me". Alas, such is human nature I guess.

1) 'Falling' - This song was partly a response to the way having to watch my mother die in hospital in 1999 at sunset on her birthday, it is also about the reality of knowing that I / we ALL have to die and that we are ALL equals in death. It's also about how people tend to put everything and anything, particularly money - before love and their own humanity.

2) 'Sick Sad World' - self-explanatory. Yep, "Daria" is one of my favorite animations, should be up there with the Simpsons in my opinion !! :-)

3) "Wandering" - This is about being able to rise above all the crap even though you have and are & will inevitably eventually be nothing.

4) 'Ratio' - this is about the strength to be found within oneself and how that strength unites the heart with all those other hearts across the world who also adhere to and express themselves in terms that do not conform to the banal and one-dimensional cardboard-cutout world of consumer society.

5) 'Long Time Coming' - This is about being alone for 10 years and living like a hermit in the inner city for 10 years & how to wake up to the fact that when you live by the truth in your heart you are never really alone, i.e. by overcoming one's fear of death.

6) 'Midnight Symphony 2' - I've always liked the idea of creating contemporary compositions & this track is an attempt at this idea, it reminds me of a 15 min track I did in 1979 called 'Midnight Symphony' - which was never released, this track is an extension of my dreams as a child where I imagined fantastic creatues living in the night who were immortal and solitary & that one of them came to my bedroom one night and made me one of them & from that moment on I was never the same again.

7) 'Sweeter Than The Day' - Self-explanatory. It's about what it says i.e. - that people can't see whats right in front of and all around them all the time. Its also about the beauty of sunset/evening time.

8) 'Tell-Tale-Heart' - This is a "contemporary Nocturne" composition i.e. - musick for the Night. I've always LOVED horror movies and romanesque / gothic architecture & its history & culture, I also love really scary music, this is my tribute to these ideas. It is also about pain and healing & in that sense plumbs the depths of the human Psyche & its struggle to come to terms with ALL our own unconscious and subconcious desires - which is expressed thru such mediums as horror, fantasy, sci-fi and all those arts that express something more than the surface of things.

9) 'Hymn To The Night' - A song about aiming as high as you can in life. It's a "hymn" to the night in the sense of "night" as a "symbol" of all that is "secret" or "hidden" in our lives, the underlying things that move and motivate us, you see I believe that the surface of things is a big lie that we all agree to abide by, but the truth is that the way I see it we are ALL "magickal" beings, incarnations of some phenomenal intelligence at work in this universe, a universe FULL of magick and mystery as well as unlimited possibilites and opportunities for experience and expression, it remains a great tragedy that the majority of people today seem as lost and confused about their place in the universe as they always were, history attests to this fact, that it's only ever been the minority who are the thinkers, artists, scientists and truth-seekers & that these people have influenced the entire history of mankind and civilisation as we know it. My "music", if you can call it that, has always been nothing more than an expression of wanting to help others wake-up to their OWN potential & that I can best do that be fulfilling my own potential and then finding ways of expressing the expereinces and adventures I've had in the land of "no limits" :-) Of course walking the road of "no limits" has taken a bit of a toll on me !!! :-)

10) 'Leaves In The Wind' - An old song originally released on Zulu compilation in 1882 - re-recorded here coz I always liked it. The song is self explanatory.

11) 'Sol Sonic' - Recorded about 3 years ago when I first got my equipment & studio. It was one of the FIRST recordings I did in 10 years so it's dear to me for that reason.

12) 'You & Me' - A reflection on the complexities of relationships.

Many thanks to the magickal Mike Keane

Fact 140 The Project Phase 2 We Love The Moon

Songs For The Children of Baphomet