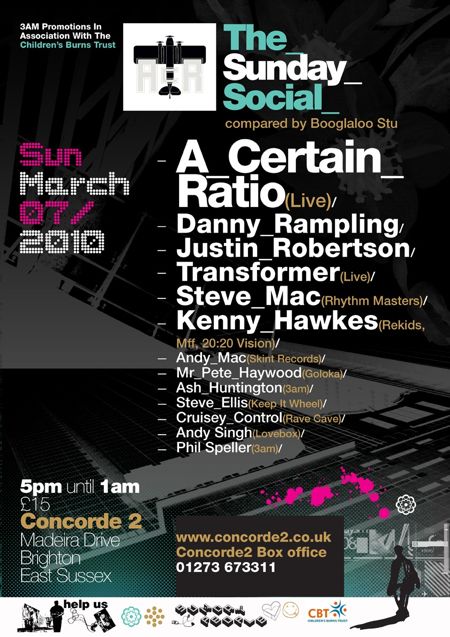 The Sunday Social is a Charity Alldayer taking place on the 7th March at the Concorde 2 in Brighton featuring Danny Rampling and A Certain Ratio amongst others. The Charity in question is The Children's Burns Trust, a national charity dedicated to providing rehabilitation support for burned and scald injured children and their families as well as prevention and awareness campaigns for which there is little or no national funding. The all dayer starts at 5pm til 1am and features two rooms of live funk, house, techno, electro and Balearic beats.

A Certain Ratio formed in 1978 and over the last 30 years their pioneering brand of punk-funk has had NYC looking to Manchester for pointers and turned out to have a huge influence on the likes of LCD Soundsystem, The Rapture, Franz Ferdinand - a whole generation of artists who like to move your feet as well as your mind. One of Factory Record's most inspired signings, they went on to continually record albums that were ahead of their time and took years to be rediscovered and appreciated. The Soul Jazz label's reissues in 2004 brought their work to a new audience and since then the band have been carefully selecting shows across the world to sell out crowds.

Danny Rampling made his name as a revolutionary dance music pioneer affectionally known as the Godfather of the British House Music Scene. His fame and notoriety originated from the late 80's when he catalysed the dance / rave / acid house explosion with his legendary club Schoom. Who would have guessed how all pervasive his influence would prove in the years to follow? Now in the 21st year anniversary of the summer of love Danny is back in the limelight again sharing his passion for music as we enter a year of special celebration and recollection of a vibrant and pivotal time in contempory culture.

The party has two rooms, the main room playing house music and the live acts with the bar DJs playing funk and eclectic selections. ALL profits go to the Children's Burns Trust. For every £350 we raise we send one child away to a summer camp with other burns injured children where they receive therapy and make friends with other children in the same position. It helps them cope with feelings of isolation and the bullying they often receive at school.