X-O-Dus > A History in Cuttings 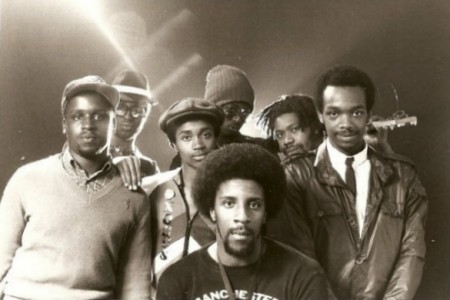 X-O-Dus: Still from photo shoot of the band 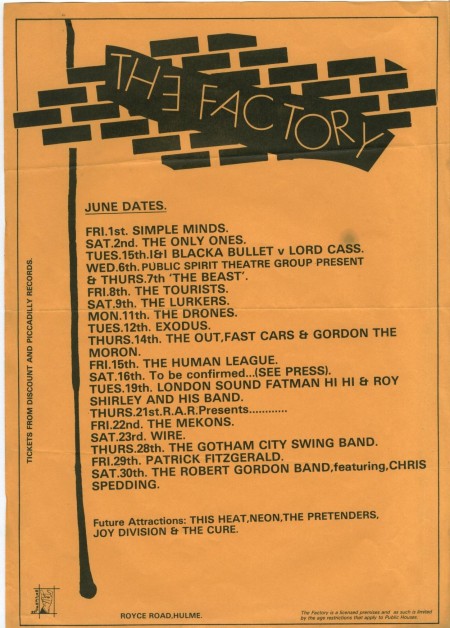 X-O-Dus: Flyer for The Factory from 1979 featuring Exodus on Tue 12 June (other artists appearing in June 79 include Simple Minds, The Only Ones, The Tourists, The Human League, The Mekons and Wire). 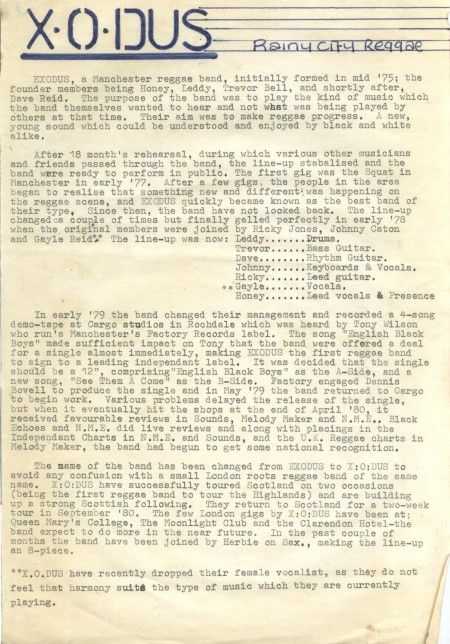 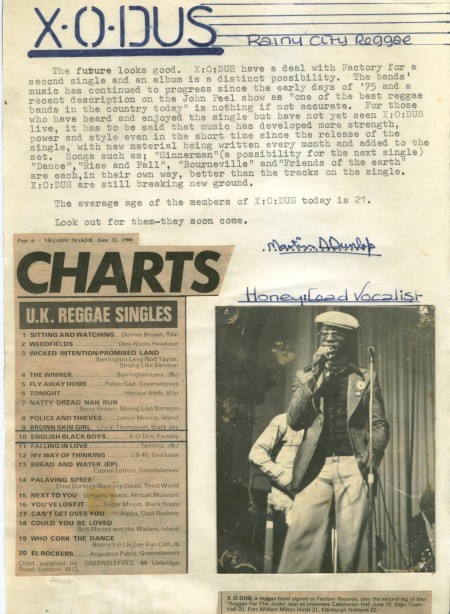 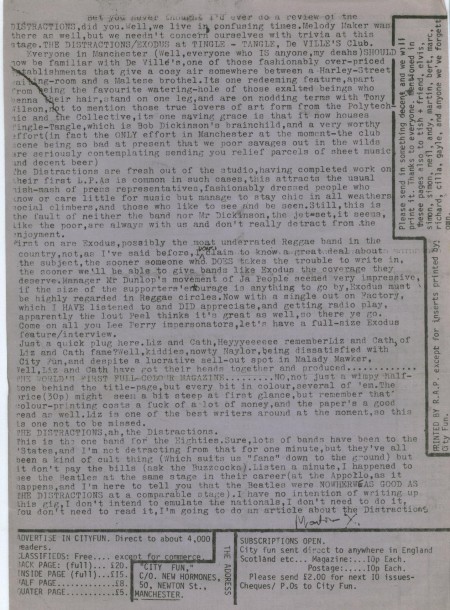 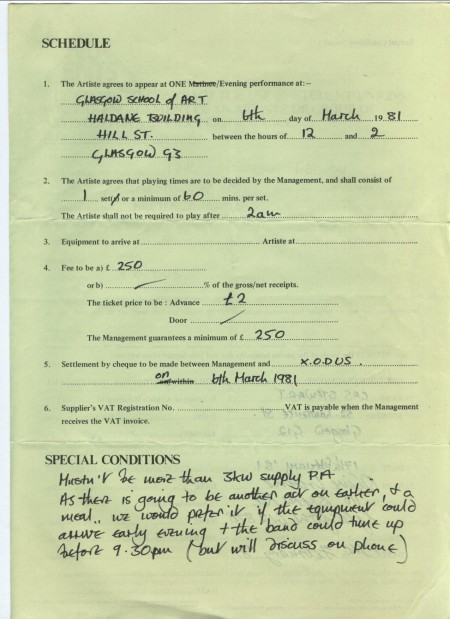 Contract for X-O-Dus to play Glasgow School of Art on 6 March 1981. Notes include "mustn't be more than 3kw supply PA". 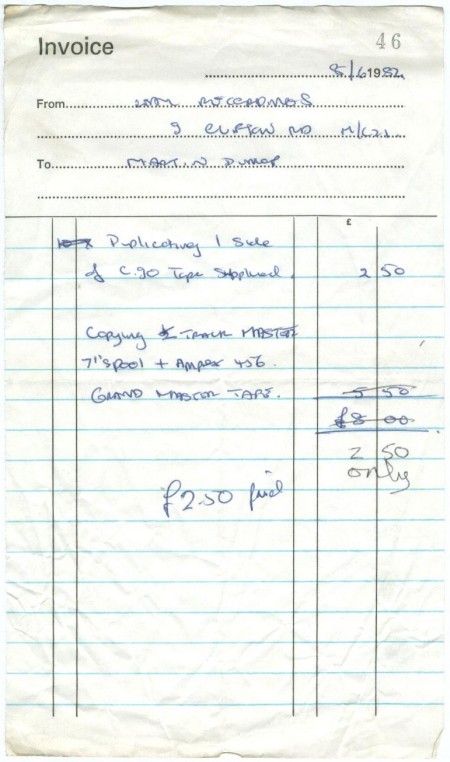 Invoice 8 June 1982 for duplicating 1 side of C30 cassette tape and copying master tape. 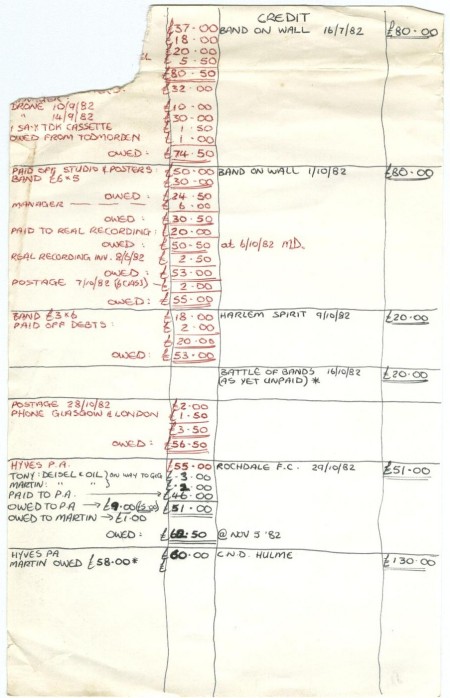 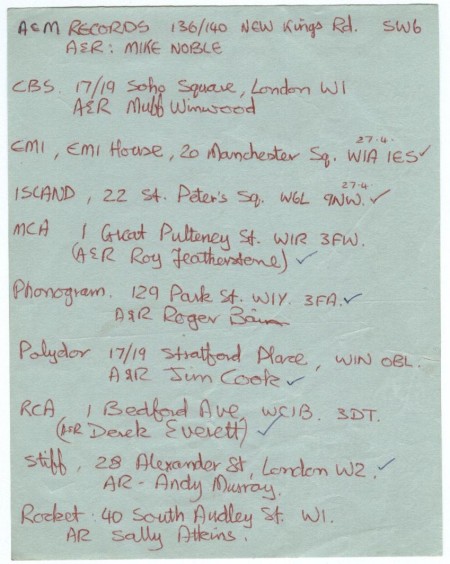 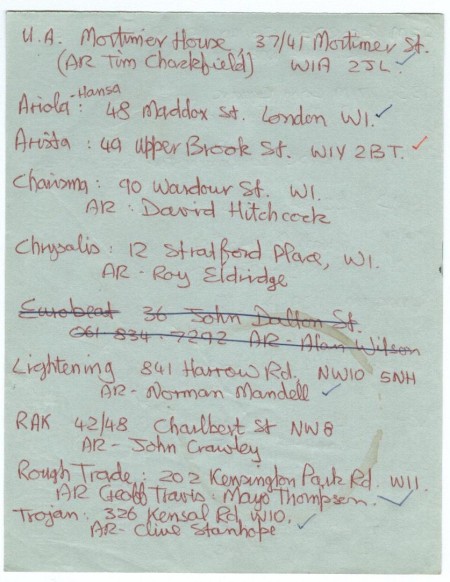 EXODUS, a Manchester reggae band, initially formed in mid '75; the founder members being Honey, Leddy, Trevor Bell, and shortly after, Dave Reid. The purpose of the band was to play the kind of music which the band themselves wanted to hear and not what was being played by others at that time. Their aim was to make reggae progress. A new, young sound which could be understood and enjoyed by black and white alike.

After 18 month's rehearsal, during which various other musicians passed through the band, the line-up stabilised and the band were ready to perform in public. The first gig was the Squat in Manchester in early '77. After a few gigs, the people in the area alise that something new and different',was happening on scene, and EXODUS quickly became known as the best band of their type. Since then, the band have not looked back. The line-up changed a couple of times but finally gelled perfectly in early '78 original members were joined by Ricky Jones, Johnny Caton and Gayle Reid*..*

The line-up was now:

In early '79 the band changed their management and recorded a 4-song demo tape at Cargo studios in Rochdale which was heard by Tony Wilson who run's Manchester's Factory Records label. The song "English Black Boys" made sufficient impact on Tony that the band were offered a deal for a single almost immediately, making EXODUS the first reggae band to sign to a leading independant label. It was decided that the single should be a 12", comprising "English Black Boys" as the A-Side, and a new song, "See Them A Come" as the B-Side. Factory engaged Dennis Bovell to produce the single and in May '79 the band returned to Cargo to begin work. Various problems delayed the release of the single, but when it eventually hit the shops at the end of April '80, it received favourable reviews in Sounds, Melody Maker and N.M.E.. Black Echoes and N.M.E. did live reviews and along with placings in the Independant Charts in N.M.E. and Sounds, and the U.K. Reggae charts in Melody Maker, the band had begun to get some national recognition.

The same of the band ha been changed from EXODUS to X:O:DUS to avoid any confusion with a small London roots reggae band of the same name. X:O:DUS have successfully toured Scotland on two occasions (being the first reggae band to tour the Highlands) and are building up a strong Scottish following. They return to Scotland for a two-week tour in September '80. The few London gigs by X:O:DUS have been at; Queen Mary's College, The Moonlight Club and the Clarendon Hotel-the band expect to do more in the near future. In the past couple of months the band have been joined by Herbie on Sax., making the line-up an 8-piece.

**X.0.DUS have recently dropped their female vocalist, as they do not feel that harmony suits the type of music which they are currently playing.

The future looks good. X:O:DUS have a deal with Factory for a second single and an album is a distinct possibility. The bands' music has continued to progress since the early days of '75 and a recent description on the John Peel show as "one of the best reggae bands in the country today" is nothing if not accurate. For those who have heard and enjoyed the single but have not yet seen X:O:DUS live, it has to be said that music has developed more strength, power and style even in the short time since the release of the single, with new material being written every month and added to the set. Songs such as; "Sinnerman" (a possibility for the next single) "Dance", "Rise and Fall", "Bourneville" and "Friends of the earth" are each, in their own way, better than the tracks on the single. X:O:DUS are still breaking new ground.

The average age of the members of X:O:DUS today is 21.

Look out for them - they soon come

"First on are Exodus, possibly the most underrated Reggae band in the country, not, as I've said before, I don't claim to know a great deal about the subject, the sooner someone who DOES takes the time to write in, the sooner we'll be able to give bands like Exodus the coverage they deserve. Manager Mr Dunlop's movement of Ja People seemed very impressive, if the size of the supporters' entourage is anything to go by, Exodus must be highly regarded in Reggae circles. Now with a single out on Factory, which I HAVE listened too and DID appreciate, and getting radio play, apparently the lout Peel thinks it's great as well, so there ye go. Come on all you Lee Perry impersonators, let's have a full-size Exodus feature/interview."

Thanks to Martin Dunlop, ex-X-O-Dus manager, for info and imagery. 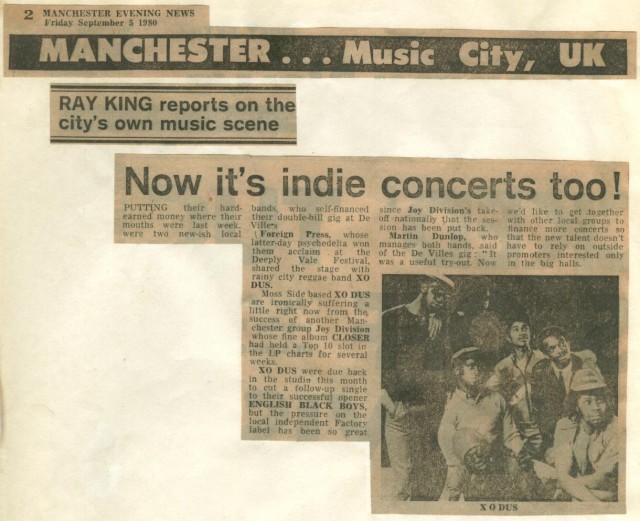 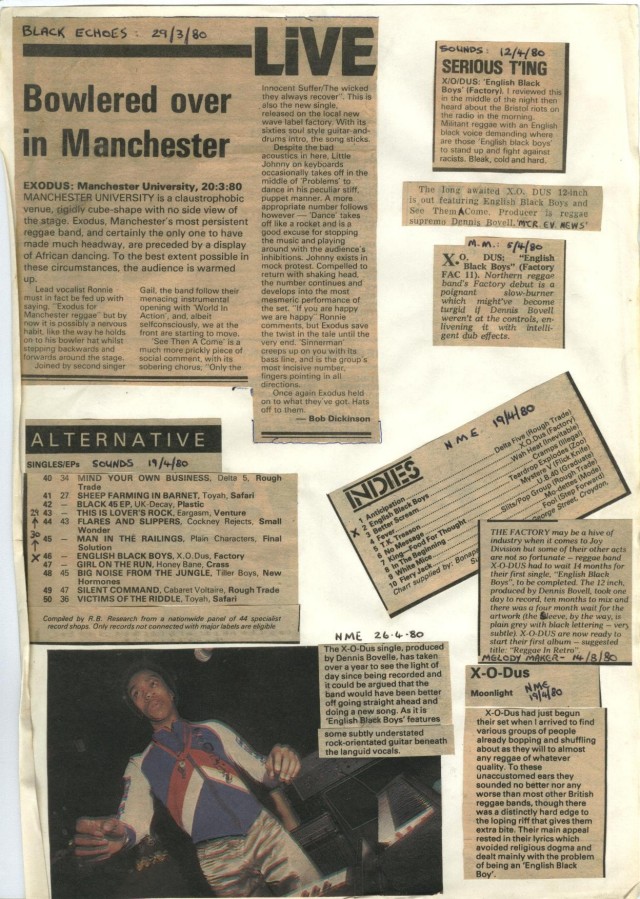 A history of X-O-Dus in cuttings

Live at Rocking Against The Racists, Blackpool, 4 Aug 2012